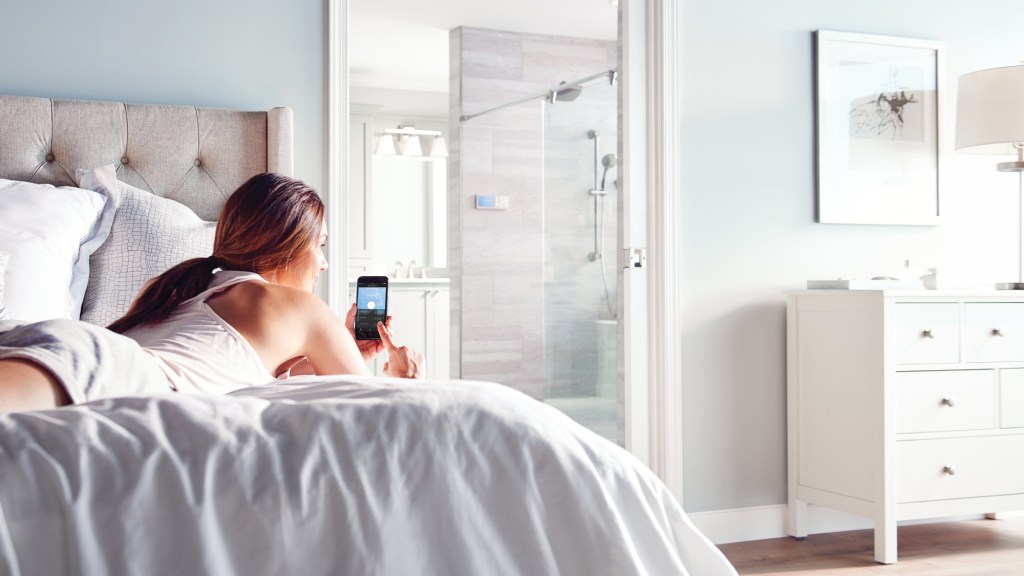 The much-hyped rise of the internet of things (commonly called the IoT, in which everyday products have internet connectivity) continues to grab headlines, with an assortment of prominent new releases emerging in the high-end segment.  It was only a few weeks ago, for example, that we profiled the new Samsung smart refrigerator. Likewise, Moen’s simply named U caught our eye earlier this year when it was unveiled at the Consumer Electronics Show (CES), and now the cloud-based smart shower system can be installed in your home.

The U by Moen is a shower system that includes a digital valve which can be controlled by a waterproof, Wi-Fi enabled wall unit with an LCD display. Using this interface, bathers can set the water temperature and receive color-coded feedback as the shower warms up. The base model ($1,225) accommodates two outlets, though a costlier version ($2,265) is available that can serve up to four outlets, giving owners greater freedom to customize their shower space with a combination of different heads, hand showers, and body sprayers.

All of this is nice, but perhaps the system’s main selling point is its ability to be entirely controlled by users’ smartphones. The controller connects to the home’s Wi-Fi network, giving connected devices (like phones and tablets) which are running Moen’s app the ability to turn on the shower, change the temperature, pause the shower, schedule showers, and turn individual outlet heads on and off. The system can save up to 12 user profiles, so every member of the house can be greeted by a custom notification and have their desired temperature, configuration, and shower duration preset for them.

Because the shower is one of the last places where you want hackers to be able to mess with you, the system uses a unique encrypted key. And since the app relies your home Wi-Fi (which is password-protected, right?), there is little need to worry that someone could remotely control your shower. Concerned that you might not be able to operate your shower during a power failure? The system can also be purchased with an additional $65 backup battery kit that keeps the shower running even when the electricity isn’t. It’s not quite Rosie the Robot from the Jetsons, but we’re getting there.