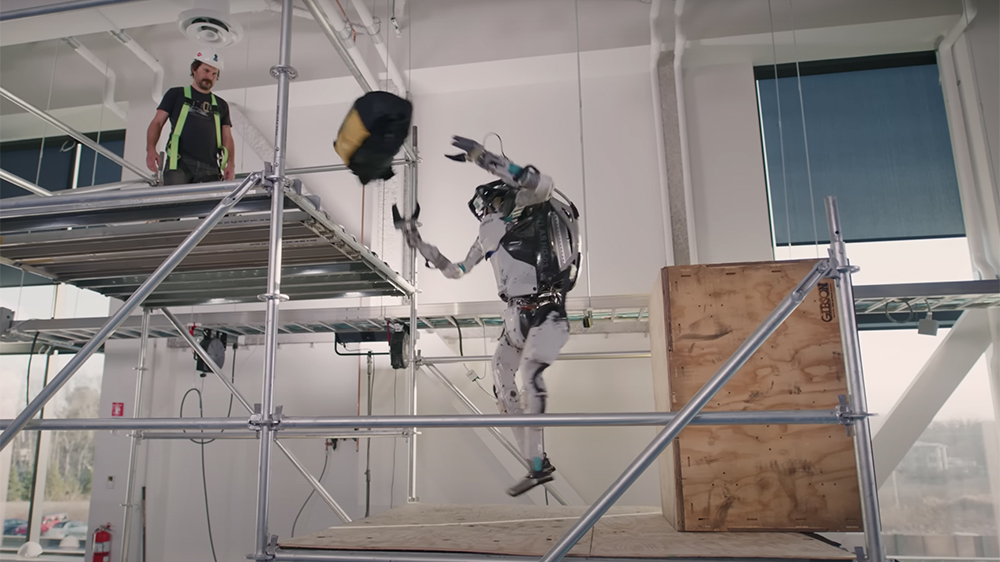 The rate at which Boston Dynamics’s robots are picking up skills is starting to get a little unsettling.

The Hyundai-owned robotics lab has just released a new video showing off its bipedal robot Atlas helping out a construction worker. The short clip, which is titled “Atlas Gets a Grip,” illustrates how robot’s list of abilities has grown by literal leaps and bounds since the last time we checked in on it.

Boston Dynamic’s Atlas videos tend to be a little playful, and the latest is no different. It starts with a construction worker standing atop a scaffolding hammering away at a post. They quickly realize they’ve forgotten their tools, but rather than climbing down to retrieve their bag, they simply ask Atlas to fetch it.

Over the next minute, we get to see the robot create a path up to the top platform, grab the bag, maneuver its way up the scaffolding, toss the tools to the worker, and then gleefully run away. Each step of the process shows the robot showing off a new skill—whether it be carefully placing a plank, tossing the tool bag or knocking over a block—and the video ends with a triumphant fist bump from its robotic star.

The most intriguing aspect of the video may be how it attempts to reposition the robot, though. The Verge points out it marks the first time Boston Dynamics has shown how its creation could be used in the workplace. A “making of” featurette released alongside the video makes clear that’s the company’s focus, at least partially, going forward.

“We’re not just thinking about how to make the robot move dynamically through its environment, like we did in [past videos],” Atlas team lead Scott Kuindersma says in the accompanying clip. “Now, we’re starting to put Atlas to work and think about how the robot should be able to perceive and manipulate objects in its environment.”

If you’re more scared than impressed by Boston Dynamic’s latest video, you can at least take comfort from the fact that Atlas is clearly not ready to start plotting humanity’s downfall just yet. Of course, we may not feel that way for much longer considering how quickly it is developing.