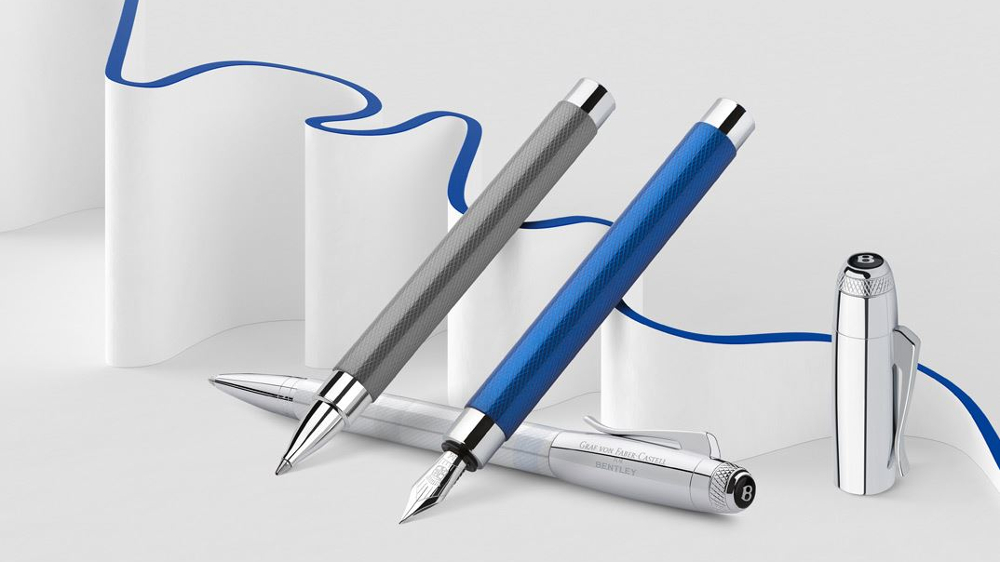 Once you’ve gotten a taste of the Bentley lifestyle, I suppose it’s only natural for some to jump all the way in. The latest way to show off your passion for what’s in your garage—or what you hope will be there someday—is a new writing instrument collection created by German writing instruments brand Graf von Faber in collaboration with the English marque.

The Graf von Faber for Bentley collection is offered in rollerball, ballpoint, and fountain pen configurations—the latter of which is available in four nib sizes. The pens’ barrels are constructed from solid metal that is guilloche engraved with the signature diamond pattern found on everything from Bentley’s iconic grille to the quilting on its leather seats. The barrel is then coated with colored lacquer in one of three colors: White Satin, Sequin Blue, or Tungsten—all of which are recreations of actual Bentley paint options. In further automotive homage, the pen’s exposed metal parts, including the end pieces of the barrel and the cap, are chromed and polished to a shine. But while those cues could be considered subtle, the large Bentley “B” logo that adorns the top of the pen’s cap leaves no confusion as to the pen’s inspiration.

Priced from $350 to $450 (depending on nib style), the pens of the Graf von Faber for Bentley collection can be accompanied by a $250 Bentley-branded Italian calfskin zippered pen case with room for two writing instruments.

While the Graf von Faber for Bentley collection is a first-of-its-kind partnership for the pen maker, it’s familiar territory for Bentley, which had previously had a lengthy relationship with Montegrappa-owned Italian brand Tibaldi—releasing limited edition collections celebrating the Mulsanne, Continental GT, and Brooklands, among other models. But it seems the boys from Crewe have shifted their attention northward for the time being, announcing that more collaborations with Graf von Faber-Castell would be coming.