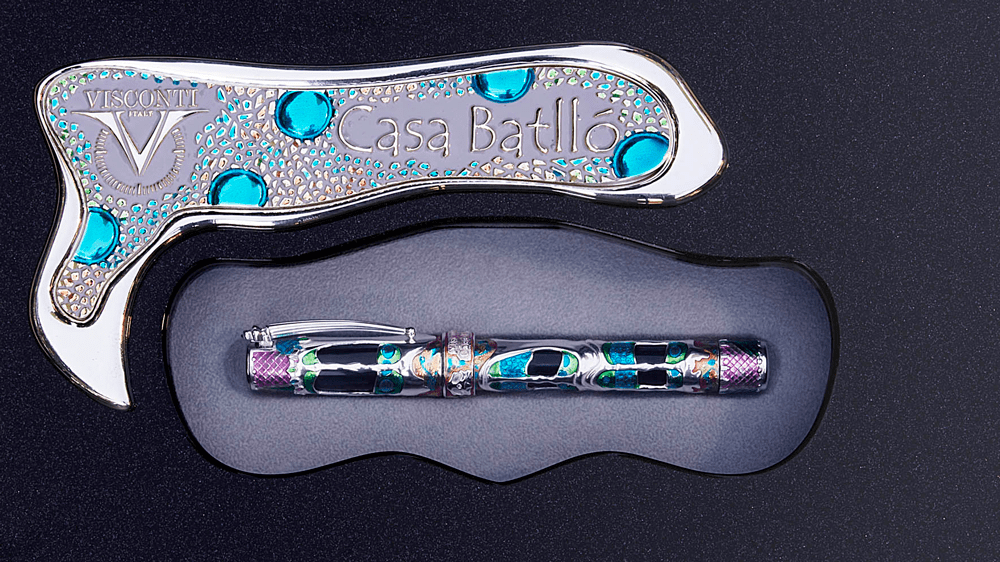 Just like wristwatches or cufflinks, fine pens have long outgrown their utilitarian roots, becoming subtle—or not so subtle, as the case may be—status symbols that reflect a part of their owners’ personalities. This year’s batch of Best of the Best pens draws inspiration from history and the arts, paying tribute to an avant-garde architect, a doomed Russian dynasty, and feudal Japan’s samurai warrior class. Read on to find the right writer for you.

The best-known practitioner of the Catalan modern architectural movement, Antoni Gaudí (1852–1926) produced some of the most spectacular and wildly fantastical buildings in the world. His signature whimsical architecture added a dash of enchantment to the Barcelonan cityscape and established Gaudí as one of the most influential architects of his time.

An artistic triumph on a smaller scale, the Visconti Casa Batlló (pictured above) is inspired by its namesake building—one of the Spanish architect’s most renowned design achievements—located in the heart of Barcelona. The pen’s design immediately catches the eye with striking splotches of color inset within the curvilinear confines of its solid silver or gold barrel and cap—a design that recalls the property’s exterior, which was plastered with lime mortar and draped in a mosaic of ceramic discs and colored glass. An iridescent coating evokes the building’s dragon-scale rooftop tiling, while the pen’s clip recalls the lance of Saint George plunging into the dragon’s back, the legend that inspired the building. Visconti’s artisans constructed the Casa Batlló in three layers—a silver or gold base, an acrylic layer, and then enamel—to give the writing instrument a captivating three-dimensionality, adding to the pure visual fascination that helps make this pen a Best of the Best winner.

Marked by intrigue and opulence, the Romanov dynasty reigned over the Russian Empire from 1613 to 1917, when the February Revolution brought the Tsarist government—as well as the royal family—to an end. A defining era in the country’s storied history, pen artisan David Oscarson found inspiration for his limited-edition Russian Imperial pen collection while studying the extravagant tragedy of the Romanovs.

During Tsar Nicholas II’s rule, Peter Carl Fabergé and his goldsmiths—particularly Fabergé workmaster Henrik Wigström (the subject of Oscarson’s first release)—crafted the famed Imperial Eggs, whose detail and artistry greatly influenced the design of the pen. Guilloche sunbursts visible through colored enamel covers the cap and barrel of the writing instruments, while an intertwining double-leaf overlay—a common motif found on the eggs—in sterling silver or gold vermeil gives the pen a regal presence.

As usual, Oscarson’s attention to detail is on full display, and the Russian Imperial collection is dripping with references to Romanov history. The royal family’s Double Eagle crest can be seen on the cap and gripping the section above the 14-karat gold nib, while the dynasty’s ruling years are displayed on white enamel.

The Russian Imperial limited-edition series is offered in four variations: ruby, emerald, sky blue, and sapphire. The collection will be limited to 304 pieces per color—in honor of the total number of years the Romanovs ruled—and includes both fountain pens ($5,900) and rollerballs ($5,700). —Bekah Berge

Italian pen maker Montegrappa is no stranger to bringing unconventional pen designs to life. But its newest model, the Samurai, pushes the boundaries of what constitutes a writing instrument to such an extreme that it’s perhaps best thought of as a hybrid objet d’art: one part historical replica, one part articulated action figure, and, of course, one part fountain pen.

At a glance, the Samurai looks like a statuette of a full set of samurai warrior armor crafted from burnished sterling silver with rose-gold accents. Each detail of the armor is meticulously cast using a modern, highly detailed version of the traditional lost wax technique, and a number of the pieces, including the hands and waist armor, are hinged so they can move freely. The brand was able to source linens from some of the finest Italian producers for the cloth elements on the pen, though the main trick was to find textiles that were resistant to ink stains. A twist of the samurai’s legs unlocks the piston-filled fountain pen hidden within.

The Samurai pen comes with a display stand and a miniature katana with a sheath that can be used as a letter opener. Only 177 examples of the pen will be made in sterling silver ($15,000), and an extra limited run of seven Samurai will be made from solid gold (price upon request). —John Lyon