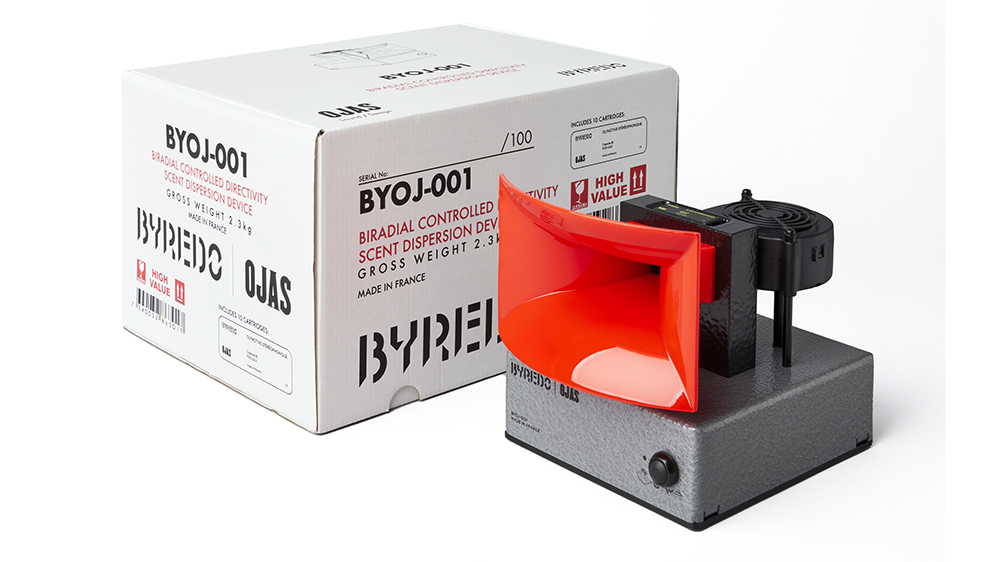 Byredo wants you to experience its fragrances the same way you would your favorite song.

The luxury brand, which was founded in Stockholm in 2006, has teamed up with artisanal audio company OJAS to create a new room diffuser, the BYOJ-01 Biradial Controlled Directivity Scent Dispersion Device. The experimental device uses the principles of speaker design to distribute aromas more efficiently than lighting a candle or unpacking a reed diffuser.

The limited-edition piece is the result of a direct collaboration between the founders of both brands, Byredo’s Ben Gorham and OJAS’s Devon Turnball. The duo’s goal was to create a device that, when used in tandem with a sound system, would enhance both experiences for the user. The diffuser—which is known as Olfactive Stéréophonique—was designed to look just like an industrial loudspeaker and is meant to run for two hours at a time. Its shape allows it to utilize acoustic horn loading theories and deliver smells in a direct and controlled manner, especially when compared to more conventional diffusers. (It should also be noted that the diffuser only emits smells, not sound, despite its name and looks).

The device also comes with its own original scent, “Olfactive Pyramid.” Just like Byerdo’s other fragrances, it’s a complex and soothing mixture that combines notes of clove bud, carnation and guaiac wood, among others. It’s meant to evoke the aroma of ancient wood structures and temples and turn music listening into more of a ritualistic practice than temporary entertainment.

Olfactive Stéréophonique is available now through Byredo’s website and a select number of its boutiques. It cost $1,300, but that includes 10 capsules—more than enough for a year of use—of Olfactive Pyramid to help turn your next vinyl listening session up to 11.

This isn’t the first time we’ve witnessed the fragrance and music worlds mingling in recent years. In late 2020, Revolve teamed up with Drake to release an $80 candle called Carby Musk through its Better World Fragrance House label.

What did the sold-out candle smell like? Drake, of course.