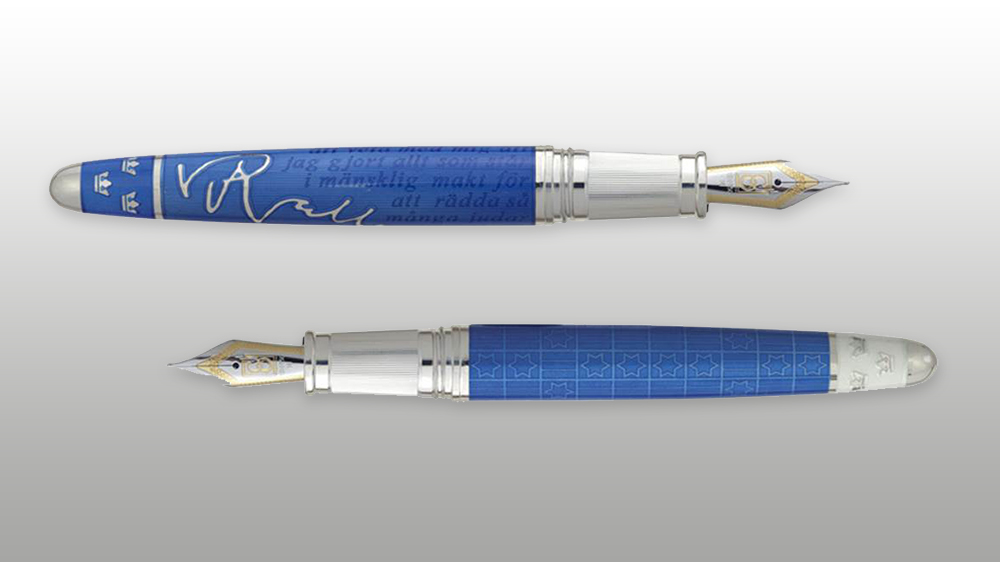 In the right hands, a pen can be used to create drama, intrigue, and even tragedy. But in the case of St. Louis pen maker David Oscarson’s new Raoul Wallenberg collection of writing instruments, the pen itself alludes to a story more harrowing than any fiction.

Like a number of his previous editions—such as those honoring scientist Alfred Nobel, botanist Carl Linnaeus, and Faberge jeweler Henrik Wigstrom, the subject of his very first pen—the Raoul Wallenberg line honors a Swede (Oscarson is very proud of his Swedish heritage). The collection’s namesake may have been born in Sweden, but he did his most important work in Budapest, Hungary, where he would help an estimated 100,000 Jews escape the Nazis during WWII.

During the German occupation of the country, Wallenberg was sent by the Swedish foreign ministry on a mission to protect people from being deported to Nazi death camps. He did this by handing out false Swedish passports—called a Schutz-Pass—and converting a number of buildings into “protected houses” that flew the Swedish flag and used diplomatic protections to shelter refugees.

Unfortunately, fate can be cruel, and the man who had protected so many from the Axis powers was arrested by Allied Soviet forces for suspicion of espionage. He was never heard from again and was said to have died in a prison in Moscow in 1947—though that official story has been long disputed.

David Oscarson’s new pen pays tribute to this remarkable man’s incredible humanity with an engraved reproduction on the cap of a Schutz-Pass, which saved so many from death, with Wallenberg’s face on it. The crown of the cap is emblazoned with a Star of David, and its serpentine clip is meant to suggest the long and dangerous road that the Jews had to take to escape the Holocaust. The Swedish Three Crowns emblem appears on the base of the pen.

The new collection is available in two different color combinations and as a rollerball ($5,700) or fountain pen ($5,900). The version paired with a blue cap features a Star of David motif on its barrel, based on the windows of the Dohány synagogue in Budapest, while the white-capped version is engraved with a quote from Wallenberg in Swedish.

So if you’re ever in need of inspiration, you can look down at Wallenberg’s words, which translate to “For me there is no other choice. I have undertaken this duty, and I would never be able to return to Stockholm without knowing within myself that I had done everything within human power to save as many Jews as possible.”