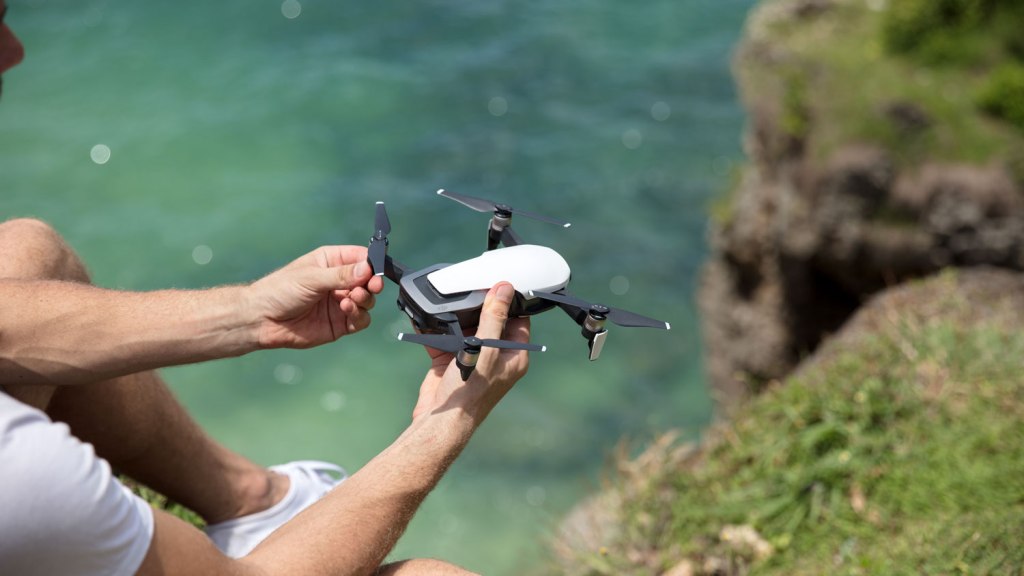 In a surprising turn, industry-leading drone manufacturer DJI waited until two weeks after CES to introduce its latest consumer model, the portable but powerful Mavic Air. A great choice for amateur drone pilots looking to jump in, the new model sits in the sweet spot between the small, entry-level Spark that we reviewed last year and the more feature-rich but unwieldy Mavic Pro. (We also profiled the upgraded Mavic Pro Platinum when it snuck out just before the holidays.)

The new Air has a more streamlined look than its predecessors in the Mavic Line and utilizes a unique, space-efficient folding system that reduces its footprint to a size more comparable to that of the Spark. In fact, since that drone features fixed struts, the Spark actually ends up being a bit wider. These daintier dimensions combined with its weight (less than a pound) make it easy to slip into a bag, or even a pocket, before an adventure without a second thought.

Despite its size, the Mavic Air abounds with features. Its camera is mounted on a three-axis gimbal and is capable of taking 12-megapixel still shots and up to 4K-resolution video (along with 2.7K standard HD, or full HD modes, if you want to cram more footage into its 8 gigabytes of internal memory or a swappable microSD card). An upgrade to DJI’s high-dynamic-range algorithms promises to reveal even greater detail in high-light and low-light shots. And to let you savor every moment of action, the drone can shoot slow-motion video in 1080p resolution (sorry, no 4K here).

One of the most exciting new features unique to the drone is a photography mode called Sphere Panoramas. If you find horizontal, vertical, or even 180-degree panoramas passé, Sphere Panoramas creates a complete 360-degree picture by automatically stitching together 25 images taken in rapid succession over a span of 8 minutes. That image can then be viewed through a pair of DJI Goggles, which puts the wearer in the center of picture, allowing them to explore it by physically turning their head and body. If the stitching is effective and efficient, this could be a really engaging way to make your friends actually excited to see your vacation photos.

Of course, the drone is also equipped with DJI staples like the ability to lock onto and track objects; perform dramatic, pre-routed QuickShots; and use hand gestures to control the drone and take selfies. Protecting you from yourself, the Air also features collision detection, auto return, and a brand-new pilot assist feature to help navigate complex environments.

Want to talk stats? The Mavic Air can operate for up to 21 minutes on a single charge, has a flight ceiling of just north of 3 miles, and can fly up to 42.5 mph (in sport mode)—making it actually a bit faster than the more expensive Mavic Pro.

The DJI Mavic Air is priced at $800 and is available in red, white, or black. The Fly More Combo, which includes the drone and extras like replacement propellers, additional batteries, and a foldout controller, will bump the price up to a cool $1,000. Not part of the package are the DJI Goggles ($450 to $550), which, in addition to the aforementioned use, can also be used to pilot the drone from a first-person perspective. Finally, all those hours spent playing video games in college are going to pay off.