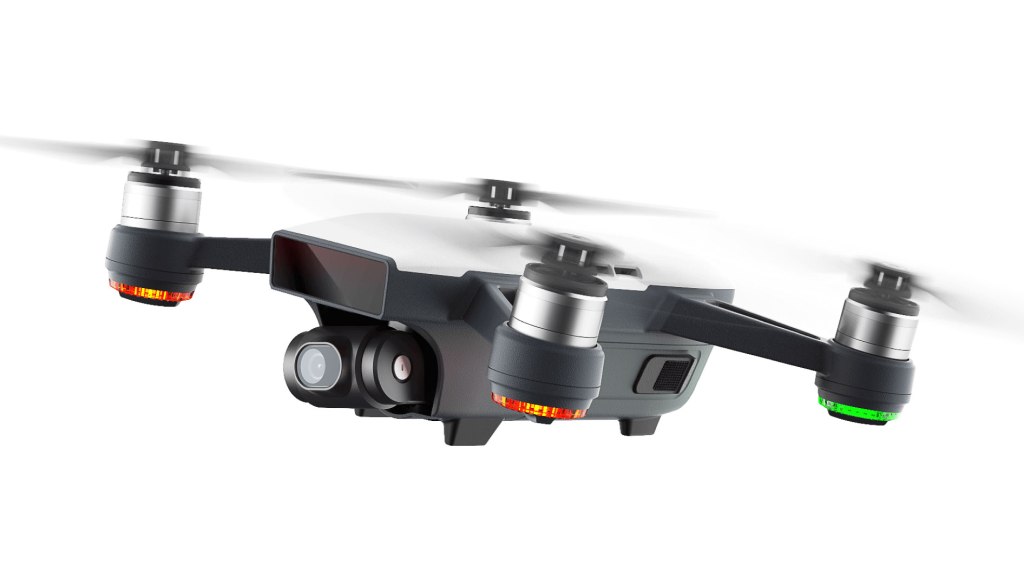 Huddling around a cellphone (or God forbid, a selfie stick) is fine for a run-of-the-mill snapshot, but to get the kind unforgettable selfie that will make you a legend on Instagram, an aerial shot taken from your personal drone just might be the ticket.

DJI, the industry-leading manufacturer of professional and consumer drones, has entered the burgeoning category of selfie drones with the introduction of the Spark. Weighing in at only 5.6 ounces with a footprint measuring just 5.6 square inches, the compact drone is small enough to throw in a backpack, and it launches in seconds. Recently, a representative from DJI swung by the offices to drop off a Spark for extended testing and show us the ropes—he flew his Spark just a few feet from the busy streets of Santa Monica Blvd.

The primary method for controlling the Spark is through the DJI Go smartphone app (available for both iPhone and Android). Once synced with the drone, the app serves as a virtual cockpit, streaming live video from the drone’s camera and providing access to its various piloting modes and camera controls. The app’s virtual control sticks are your main controls, mimicking the way you would maneuver a drone using a real remote control with actual thumb sticks.

But once I was alone with the drone, I found the interface a bit overwhelming—even after receiving a full demonstration of the Spark’s capabilities. Switching between various flight modes and navigating the interface while the drone is hovering in front of you is a bit nerve-wracking and admittedly takes some getting used to. And since the battery limits flight time to just 16 minutes, it will probably take a few flights before you get enough experience to confidently navigate the interface. That said, once a level of mastery is achieved, you will be flying around and switching between the drone’s various functions with ease.

With the Spark, DJI has introduced not just a smaller drone, but new ways to control it as well. The most significant new feature is gesture control. This mode allows a user to control the drone using only simple hand movements. The drone can take off from an outstretched hand, and then its visual sensor can lock on to the user’s outstretched palm. As they move their hand, the drone dutifully follows the appendage. Wave goodbye, and the drone flies up and backward to get into position for a selfie, which is then initiated by making a “picture frame” gesture with your fingers. The gesture controls really are quite amazing, and are a great way to give children or those intimidated by the controls a chance to have fun interacting with the drone.

In practice, however, the system is not perfect. The drone can easily lose its lock if the user moves too quickly, and some gestures take a few tries before the drone recognizes them. It also has the tendency to accidentally lock on to the wrong person when facing a group. The motion controls are certainly fun to play around with and a great way to get people interested in the drone, but once you tire of them, you’ll find yourself relying on the smartphone controls or remote controller (more on that later) for day-to-day use.

In addition to the gesture controls, the Spark is loaded with features that DJI has adapted from their top-of-the-line drones, such as front and bottom collision sensors, object tracking, and a GPS-guided return-to-home function. It is equipped with a 12-megapixel, 1080p camera mounted to a 2-axis gimbal that provides pitch and roll stabilization (yaw stabilization is handled digitally). It also comes preprogramed with four cinematic flight paths (including a back-and-up movement and an ascending spiral) that make it easy to capture epic video shots with one touch.

The base-model Spark is priced at $500, but for those who really want to experience everything the drone has to offer, DJI offers the $700 Fly More combo. The extra cash buys an hour of in-person training with a DJI representative, an extra battery and prop guards, a charging station, and the remote control (which resembles the sort of controller one might get with a video game console). In addition to giving pilots a more tactile sense of control, the device can be used to switch the drone into Sport Mode, which disables many safety features, makes it nimbler, and allows it to reach its top speed of 31 mph.

As far as selfie drones go, you would be hard pressed to find one that’s as feature rich, yet at the same time so easy to fly. Its compact size, formidable camera, and versatility make it the perfect travel companion for on-the-fly airborne selfies and vacation videos. Just be sure to bring extra batteries.