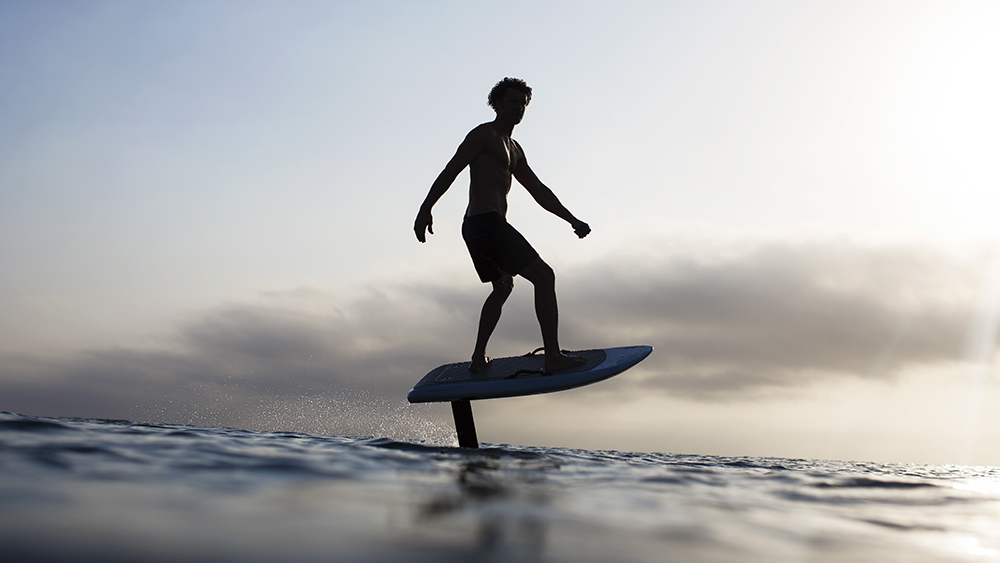 Not every day—or body of water—delivers waves worthy enough to ride. Hence the paddleboard, more serene than it is thrilling. But adrenaline junkies now have another option. No surf is no problem with Fliteboard, an electric hydrofoil surfboard that will make even newbies feel like Laird Hamilton. Developed by kiteboarder David Trewern, in Australia’s Byron Bay, the $12,935 plank lifts a rider well above the water and can cruise as fast as 28 mph.

Mediocre at best in my surfing heyday, I hoped muscle memory would at least allow me to stand during a recent demo off Malibu’s Carbon Beach. The Fliteboard, however, was surprisingly stable and easy to maneuver. In no time, I was levitating over small swells, gaining speed and confidence while gliding beyond the pier to carve wide, taunting turns within view of the surfers lined up, desperate for waves. And when I inevitably wiped out, the board shut off as soon as the throttle in my grip hit the water.

I imagine that for every hoot of approval heard from the distant wave riders, there was a corresponding snarky remark, as the tech has its detractors. According to Trewern, some of surfing’s traditionalists at his home break viewed it as sacrilege, but, as Hamilton himself reminded him, the early Hawaiian surfers were also innovators.

“It looks very simple, but there’s a lot underneath the surface,” says Trewern.

“Using high-voltage electronics in salt water is challenging, and there are about 500 parts in a Fliteboard, including the battery and connectors, all of which are waterproof. And it had to look at home on a superyacht.”

The deck is built from compressed layers of carbon fiber, fiberglass and PVC topped with an ash veneer or more carbon, depending on the model.

Propulsion comes from a 7 hp, brushless electric motor—encased in a unibody fuselage of aircraft-grade aluminum—mated to a Newton-Rader propeller and German-made reduction gearbox. The hydrofoil technology draws from competitive sailing and features wings designed by naval architects with America’s Cup experience.

Riders manage the entire system via the handheld Flite Controller (with Bluetooth connectivity and GPS), which allows for 20 gear selections and stores each session’s data, such as top speed, distance traveled and battery power. A charge is good for up to 1.5 hours on the water, which is plenty of time—this bit of fun is also a serious lower-body workout and builds core strength worthy of any marine mammal. As Trewern puts it: “We’re trying to make you feel like a dolphin.”