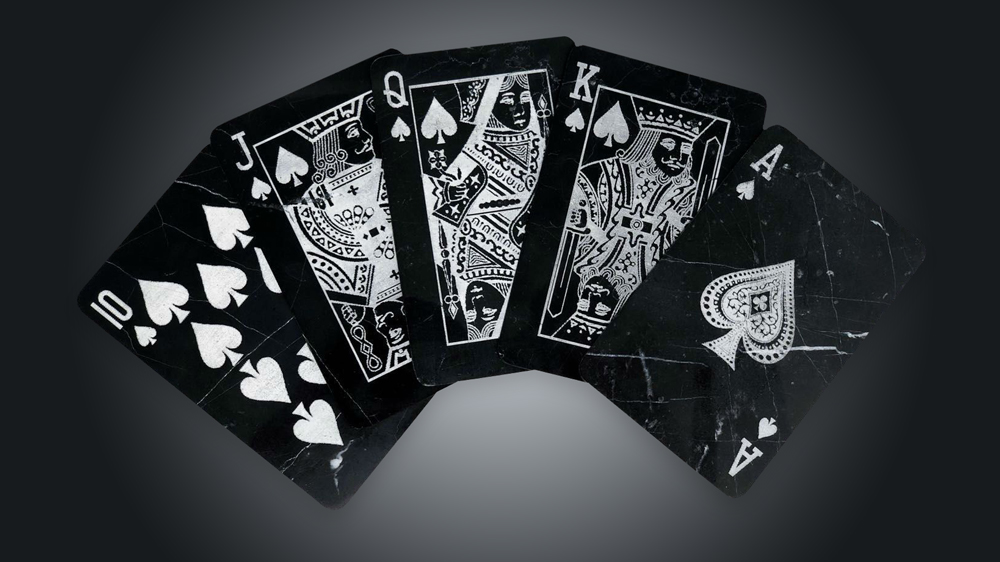 Riffle shufflers need not apply: This new poker card set is made entirely from thin, stiff slats of marble. The unusual choice of material comes as no surprise when you consider the source—San Francisco–based brand Mikol—which creates all manner of accessories, including smartphone cases, business cards, and even bow ties (clip-on, naturally) from marble.

A gorgeous desktop accessory and guaranteed conversation starter, the deck is crafted from high-quality Negro Marquina marble—a highly coveted black marble featuring striking white veins that provide a pleasing visual contrast. Mined in Basque Country in Spain, the marble is popular with interior designers—it was used to create fireplace mantles for the W Hollywood’s recently opened residences, for instance—but it is safe to say that this is the first time a playing card deck has been fashioned from the material.

But don’t worry, these aren’t the type of stone-slab playing cards you’ve seen on the Flintstones; each card is cut to regulation size and is about the thickness of a credit card. This means that even when stacked together, it is not much more than twice the size of a standard deck. Given the material, fragility is an obvious concern, but Mikol says that even if the cards are dropped, they can absorb the impact. So while most buyers will just keep the deck for show, the bold can actually use them to play a spontaneous game of Texas hold ’em. Just don’t play with the same group too often: the unique patterns of veining on each card could be a dead giveaway to any Rain Man types in your party.

Each card is sanded by hand and then laser-etched with the appropriate rank and suit designs. A full deck of Mikol Marble Poker Cards will cost you $775, though if you are more interested in the cards strictly as design pieces, you can get a set consisting of four aces for $75.