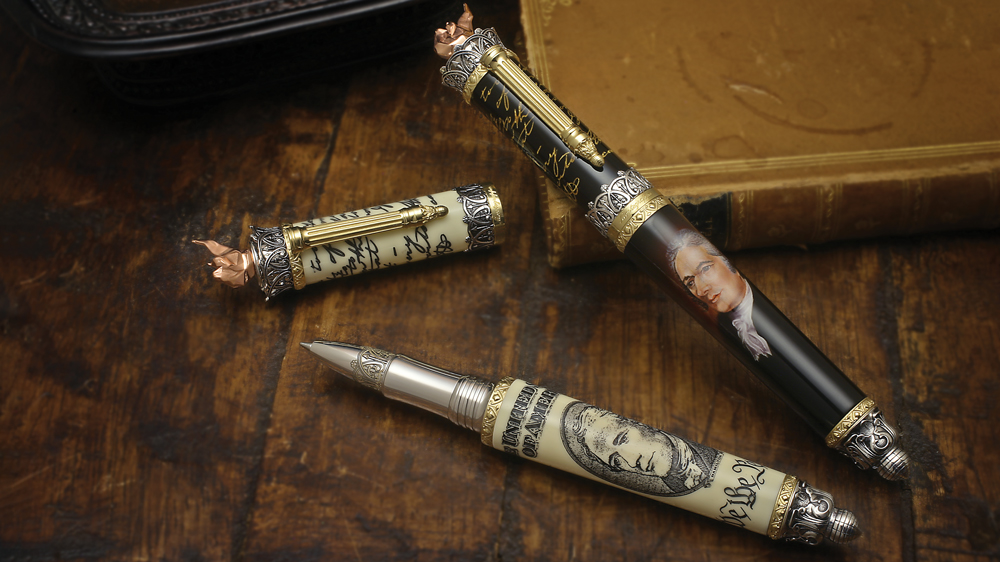 When Roger Stein—a successful harness racing and thoroughbred trainer who opened the online pen retailer Penporium in 2007—had the chance to collaborate with Italian pen maker Montegrappa on a new limited-edition writing-instrument collection, he certainly wasn’t going to throw away his shot. Riding a wave of resurging popularity initiated by Lin Manuel Miranda’s smash-hit musical Hamilton, our founding father du jour has been commemorated by Stein with the Montegrappa Alexander Hamilton writing-instrument collection, available exclusively through the Penporium website.

Available in two styles, the pens feature reproductions of Hamilton’s handwriting on their caps and large portraits of the statesman on their barrels. They also share decorative elements in sterling silver, adorning the end of the barrel and both ends of the cap, as well as a gold vermeil clip and accents. Designed to resemble the Statue of Liberty’s torch, the ends of the caps feature a sculptural depiction of the flame in rose gold. (Rival Montblanc released a pen entirely dedicated to Statue of Liberty years ago.)

In recognition of Hamilton’s role as the United States’ first secretary of the treasury and as a champion of the central bank, the Ivory White version of the pen features a resin barrel with a reproduction of the bank-note portrait of Hamilton that was introduced when he was added to the $10 bill in 1928. The Black version, on the other hand, is decorated with a hand-painted reproduction of John Trumbull’s portrait of the politician from 1805—the year following his dueling death at the hands of longtime rival Aaron Burr. To create the miniature portraits, Montegrappa enlisted artist Lorena Straffi, a previous collaborator who has also worked with Ducati, Maserati, and Conway Stewart. Her fascinating process can be seen in greater detail in the video below.