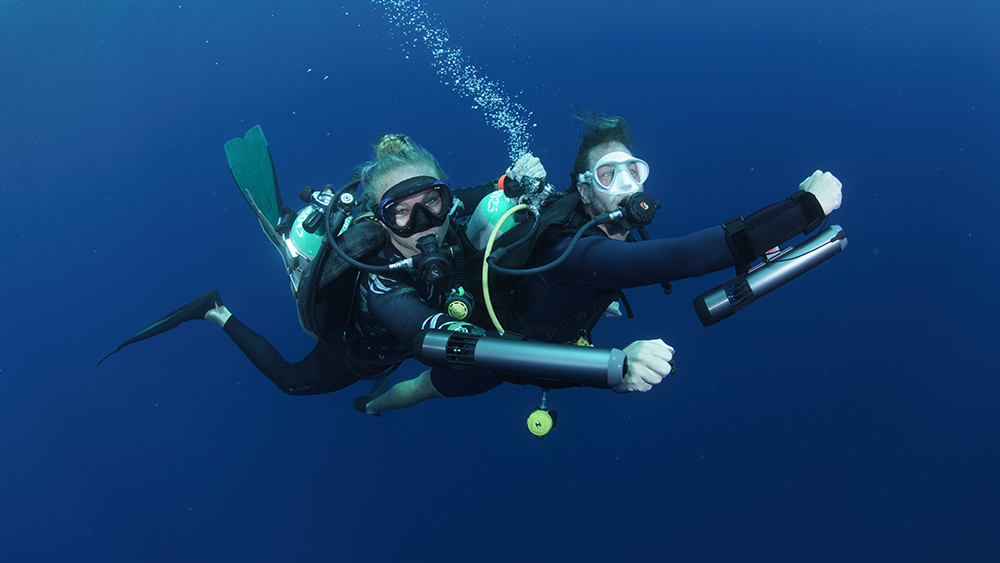 An underwater scooter the size of your forearm could be here sooner than you think—if Waydoo has anything to say about it, that is.

The Chinese company, best known for its electric foil board, has just unveiled a nifty new device called the Subnado that integrates seamlessly with divers. In fact, the team claims it’s the smallest and lightest underwater scooter in the world. And looking at the specs, that’s hard to refute.

Measuring just shy of 15 inches from tip to tail, the Subnado has a sleek, cylindrical body and a somewhat phallic silhouette. Forged from aluminum, the scooter is 2.4 inches wide (about the same as a Coke bottle) and tips the scales at a mere three pounds. It’s a far cry from the first torpedo-like scooters that were developed for soldiers during WWII. It’s also a lot more compact than most of the modern models on the market, like, say, the H2 AquaJet Dive that’s shaped like a manta ray.

That doesn’t mean it’s short on power, though. The Subnado is equipped with a 500 W electric motor good for up to 14 lbs of thrust. That’s enough for a diver weighing 143 lbs to hit at a maximum speed of 4.6 feet per second. Fitted with a 98 Wh lithium-ion battery, the Subnado can run for up to 56 minutes on a single charge. It also sports a fast-charging system and can be fully recharged in 1.2 hours via any USB charger.

With a maximum operating depth of 197 feet, the Subnado is fit for a variety of underwater activities. It’s cinch to use, too: It has a quick-release mount that is typically strapped to a forearm, though Waydoo says it can also be attached to legs, surfboards, stand-up paddleboards and gas tanks.

The device itself is controlled via a hard-wired remote that can be worn around the index finger and operated by the thumb. You can also opt to include an “expansion ring” on the front of the scooter to create more mounting points for cameras, lights or other accessories.

Waydoo plans to launch a crowdfunding campaign on Kickstarter in the next couple of months and details regarding production will follow. As for cost, the Subnado starts at $299. Not bad for a new, motorized appendage.