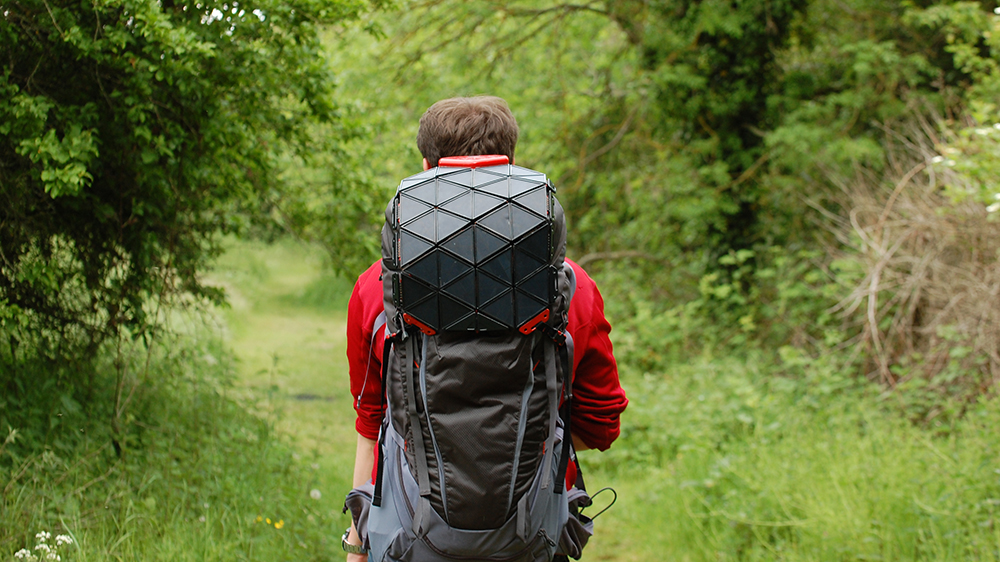 Every hiker and camper knows that a good backpack is vital, but a new bag concept might make enjoying the great outdoors more convenient than ever before. British design student Brad Brister has designed a solar panel-equipped rucksack system that will allow you to keep your modern gadgets charged no matter how far off the beaten path you wander.

The result of a collaboration between Brister and outdoor gear company North Face, the SunUp concept seeks to make solar backpacks more effective than ever before. On his website, Brister writes that the SunUp backpack, which is part of his final-year project for his Product Design Engineering degree at Brunel University in London, is an attempt to make solar usage while backpacking more of a realistic option. Though only in the prototype stage, the bag’s meshed solar panel set-up promises charge its internal 4,000-mAh battery in 12 hours.

“Currently, you have two main options, either the more common rigid poly/monocrystalline panels which whilst having a higher efficiency than most at 21 percent, are much more fragile and prone to breakages,” he explains on his website. “Your other option is the fully flexible thin-film amorphous silicon panels. While these are much more durable than rigid panels as a result of being able to flex and move, they are much less efficient at only 7 percent average efficiency.”

Brister’s ingenious solution was to take the more efficient but fragile polycrystalline panels and cut them into smaller triangles that are harder to break. The triangles are then interlinked with flexible conductive hinges, resulting in a lightweight mesh of panels that can absorb more sunlight and withstand the rigors of backpacking. The design also means that individual panels can be replaced if they are damaged.

After extensive testing, Brister found a day of hiking—which result in 12 hours of exposure to direct sunlight—can provide enough power to the bag’s internal battery to fully charge a mobile device via a USB connection, with plenty of left over for other items that may need some juice. The solar set-up is also removable and can be attached to other camping equipment like a kayak.

SunUp was a National Runner-Up for last month’s prestigious James Dyson Award, according to New Atlas. The website reports that Brister intends to further develop the project in the future, with hopes of designing a more modular system that could increase energy storage capacity.