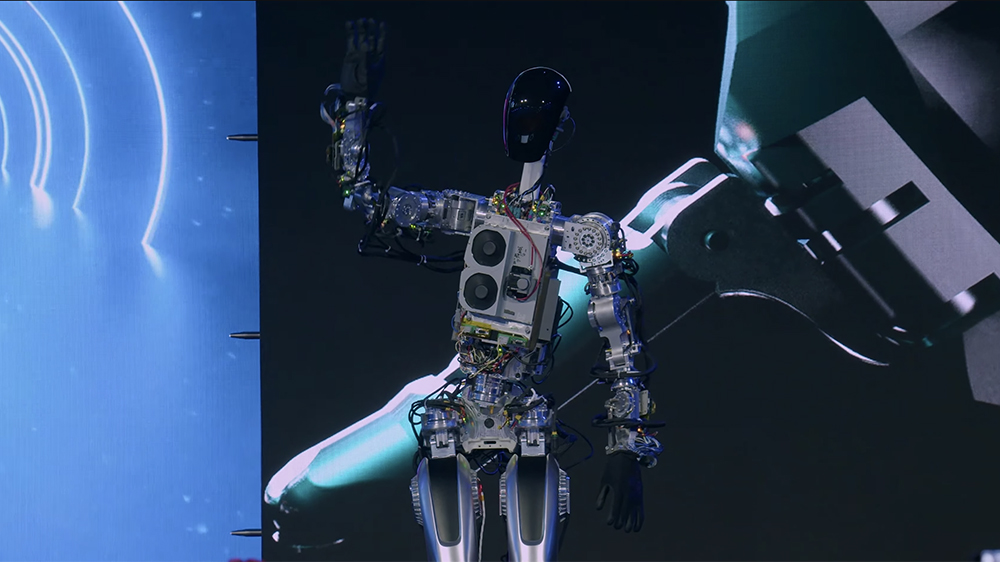 Tesla is ready to get into the robot business.

Elon Musk showed off early prototypes of the EV maker’s first bipedal humanoid robot, Optimus, at its annual AI Day recruiting event in Palo Alto, Calif., on Friday, according to CNBC. The droid is very clearly still a work in progress, but the company’s CEO said it will eventually be available for consumers to purchase.

Musk first announced that Tesla was working on a robot at last year’s AI Day, though the marque had no prototype to show off. (You might remember a dancer dressed as a robot performed instead.) This year, however, Telsa brought out a “rough development robot” that slowly walked on stage and waved its hands in the air. Another prototype closer to what Optimus will end up looking like was also brought out, though it had to be held up by three people. A pre-shot video showing the droid performing more complex tasks, like carrying a box, was also shown.

It wasn’t exactly the most impressive robot display we’ve seen. Boston Dynamics has shown off somewhat terrifying droids that can do back flips and dance. Musk did give an explanation for the relative simplicity of the display: Optimus had never operated without a tether, and the company was just being careful. When it is further along, Musk has said it will be able to “help millions of people.”

“The robot can actually do a lot more than we just showed you,” Musk was quoted as saying by CNN. “We just didn’t want it to fall on its face.”

Despite Musk’s trademark bravado, some AI experts were not convinced by Optimus or the event as a whole, which also included updates on Tesla’s “Full Self Driving” technology. Researcher Filip Piekniewski tweeted (via the AP): “This Tesla AI day is next level cringeworthy. Complete and utter scam. Who on earth believes this bulls–t anymore?”

According to Musk, we’ll find out before the decade’s end if Optimus can live up to the self-generated hype. Although Tesla engineers have only been working on the robot for six to eight months, the executive said the robot will be available in three to five years and could cost less than $20,000.

Don’t be surprised to see either or both of those targets change, though. We’re still waiting for the marque’s Roadster sports car to go into production, five years after it was first announced. It’s also unclear when the Cybertruck will be available, and Tesla’s website no longer makes any mention of the $39,900 starting price that Musk mentioned when the EV debuted back in 2019, either.