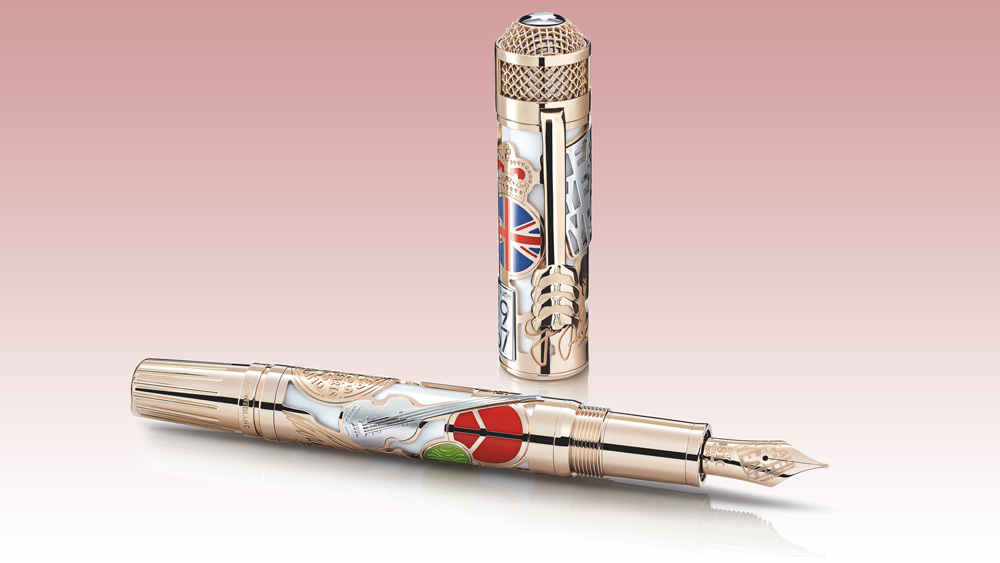 John Lennon. Paul McCartney. George Harrison. Ringo Starr. The four members of The Beatles did what few bands are able to: They became the voice of a generation, defied the norm, broke expectations, and injected their music with a level of innovation and creativity rarely seen. Indeed, in the space of 7 years, they changed the very definition of rock and roll. It is this outstanding legacy that inspired Montblanc to craft three new writing instruments for the Great Characters collection dedicated to the Fab Four.

Widely considered one of the most influential and important rock and roll albums of all time, Sgt. Pepper’s Lonely Hearts Club Band gave us such notable songs as “With A Little Help From My Friends,” “She’s Leaving Home,” and of course, “Lucy In The Sky With Diamonds.” Montblanc pays homage to this musical masterpiece with the Beatles Special Edition. Nearly as colorful as the album cover itself, the groovy writing instrument is wrapped in multicolored stripes on both the barrel and cap. A true treat for the pen connoisseur, it is crafted using a unique lacquering process that involves more than 10 steps.

Thanks to the cover of the Beatles’ Abbey Road album, the eponymous thoroughfare in London has become one of the most iconic locations in the world. It is also home to Abbey Road Studios—where music greats have been recording albums for decades—and served as home base for many of the Beatles jam sessions. The Beatles Limited Edition 1969 pays tribute to this heritage with a cap and barrel inspired by the band’s eleventh album. Peace symbolism and the word Love in cherry red comes together with silhouettes of the Fab Four crossing the road. The Union Jack is displayed in honor of Her Majesty, while the license plate to their VW “LMW 28 IF” is displayed at the uppermost part of the cap, just below the microphone-shaped top.

Beatlemania really rose to a fever pitch when the band crossed the pond and arrived in the United States. The Beatles Limited Edition 88 pays tribute to that breakthrough by showcasing a British flag fittingly topped with a crown, a guitar, the Beatles’ signatures and portraits, the Apple Records label, and three bold words, “Yeah, Yeah, Yeah.” The words were taken from the cover of the Daily Mirror newspaper, which printed Yeah, Yeah, USA to announce the long-awaited arrival of the Beatles in America in 1964. The solid gold skeletonized cap and barrel features lacquer inlays, a clip with four charming mustaches, and a microphone-shaped cap top.

The Great Characters, the Beatles limited edition pens are available in fountain and rollerball configurations (The Beatles Special Edition offers a ballpoint version as well), and pricing starts from $720 for the Special Edition, $2,765 for the Limited Edition 1969, and $30,700 for the Limited Edition 88. In addition, Montblanc is offering Beatles-themed stationery and ink refills.

Watch: This Robotic Arm Can Do Everything From Laser Engraving to Stirring Your Soup