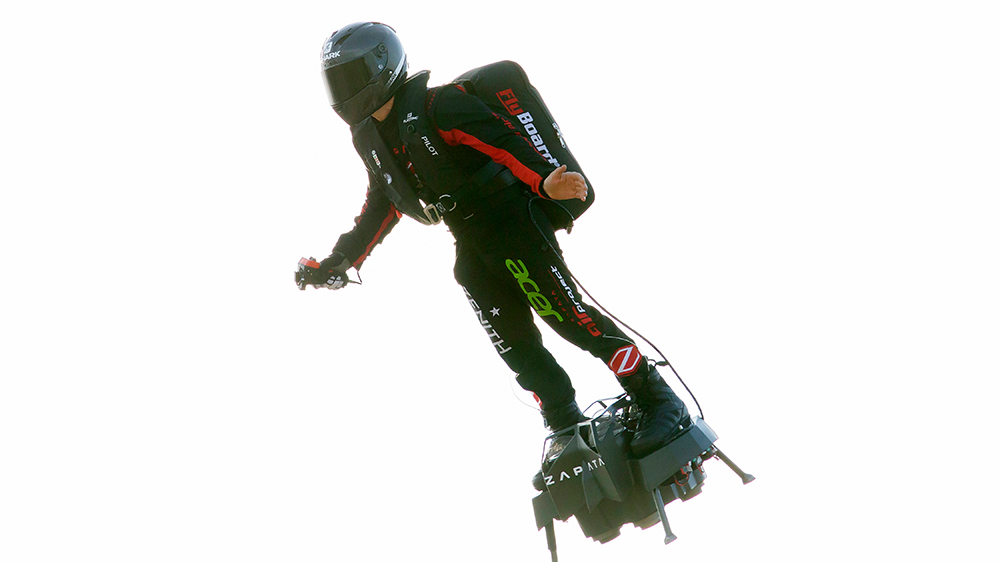 Yesterday, a Frenchman proved that if at first you don’t succeed, fly, fly, fly again: After a failed attempt last month, inventor Franky Zapata has successfully crossed the English Channel on his very own jet-powered hoverboard.

Soaring above the seas on a device he calls the Flyboard Air, the real-life rocket man covered approximately 20 miles—from Sangatte in northern France to St. Margaret’s Bay in southern England—in just 22 minutes, reaching a top speed of 110 miles per hour. Following his touchdown in Britain, the visibly elated inventor told reporters he’d achieved his dreams.

“I’m feeling happy … it’s just an amazing moment in my life,” he told The Guardian.

Zapata’s gas turbine-powered contraption was fueled by five small jets with only enough paraffin to keep him in the air for 10 minutes, thus he was required to refuel halfway through his journey. During his first attempt on July 25, the 40 year old fell into the water while trying to land on the refueling boat—but the landing platform used on Sunday was much bigger and therefore the former jet ski champion could avoid making the same mistake.

But it wasn’t all smooth sailing: Operating the hoverboard is physically taxing—in fact, Zapata lost two fingers during the maiden flight three years ago—and requires high levels of endurance. “It’s an isometric exercise for the thighs, so it burns—it’s quite hard,” Zapata said. And the strong winds in the Channel added another layer of difficulty, with unpredictable gusts threatening to destabilize Zapata.

Moreover, the contraption itself had to undergo major repairs following the botched first attempt. Zapata and his team reportedly worked 16-hour days to get the hoverboard in working order for Sunday’s flight—which clearly paid off.

Zapata’s journey was a tribute to French pilot Louis Blériot, who made the first flight across the Channel 110 years ago. “What I have done is a lot smaller, but I followed my dream, and that’s huge,” Zapata said. We couldn’t agree more.

Check out a video of Zapata’s impressive feat below: