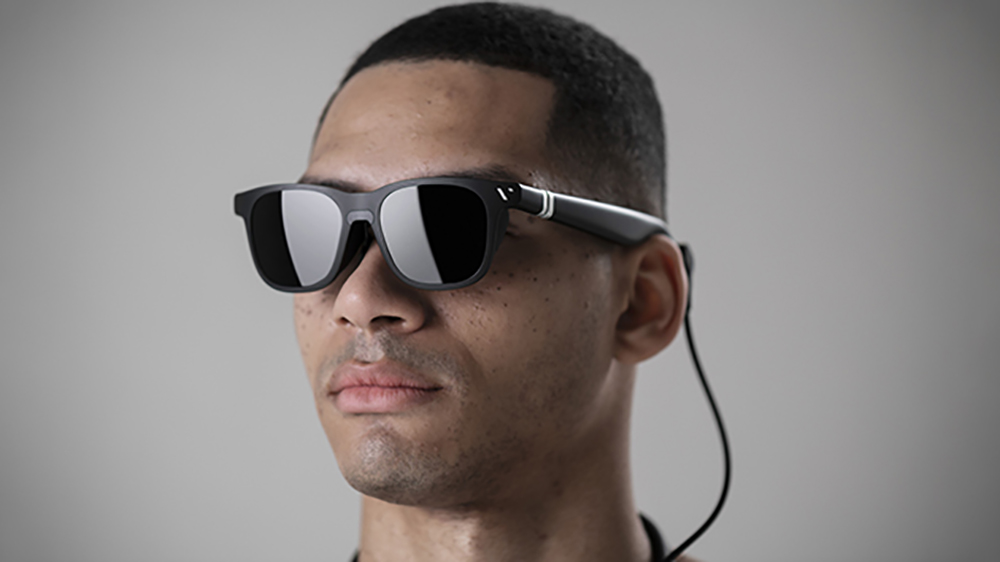 There’s no question that VR headsets are fun, but they can also be quite bulky and cumbersome. That’s where the new Viture One smart glasses come in.

The brainchild of tech start-up Viture, the next-gen eyewear allows you to stream and game from anywhere without a bunch of hefty gear. Penned by London-based design agency Layer, the streamlined frames weigh just 2.75 ounces (78 grams) yet pack a ton of innovative tech to please even the most discerning gadgeteers.

How, you ask? The nifty neckband accompanying the ultra-slim specs does most of the heavy lifting. It contains both the central processing unit and graphic processing unit, along with an intuitive control panel. The lenses, meanwhile, display a 120-inch virtual screen in front of the wearer that can be used in practically any lighting condition.

The Viture One glasses and the accompanying neckband.  Courtesy of Layer

Elsewhere, the ear-facing speakers have been seamlessly integrated into the temples of the frames and cannot be spotted when you’re facing forward. In fact, the glasses just look like a slightly chunky pair of Wayfarers.

As for functionality, Layer says Viture One’s operating system is compatible with almost all major streaming and gaming platforms. What’s more, you can easily sync the glasses with another pair to watch or play along with friends while on the go.

Viture One aims to be more stylish and versatile than other VR headsets and smart glasses, too. Layer developed an interchangeable nose bridge that allows the eyewear to compliment a range of face shapes. The display can also be adjusted to suit those with short-sight vision.

A detailed look at the neckband’s controls for the eyewear.  Courtesy of Layer

“The smart eyewear space is typically populated by over-designed, overly technical frames,” Layer’s founder Benjamin Hubert said in a statement. “In creating Viture One, we wanted to deliver the antithesis of this trend. The result is a product that is more lifestyle led, akin to the traditional eyewear you would wear proudly as part of your fashion expression.”

Since Hubert first started Layer in 2015, the studio has worked with well-known brands, such as Aesop, Google, Panasonic and Nike, to develop products at the bleeding edge. Viture One is no exception; it’s a smart wearable that might actually give you style points instead of taking them away.

Now show us a VR headset that can do that.