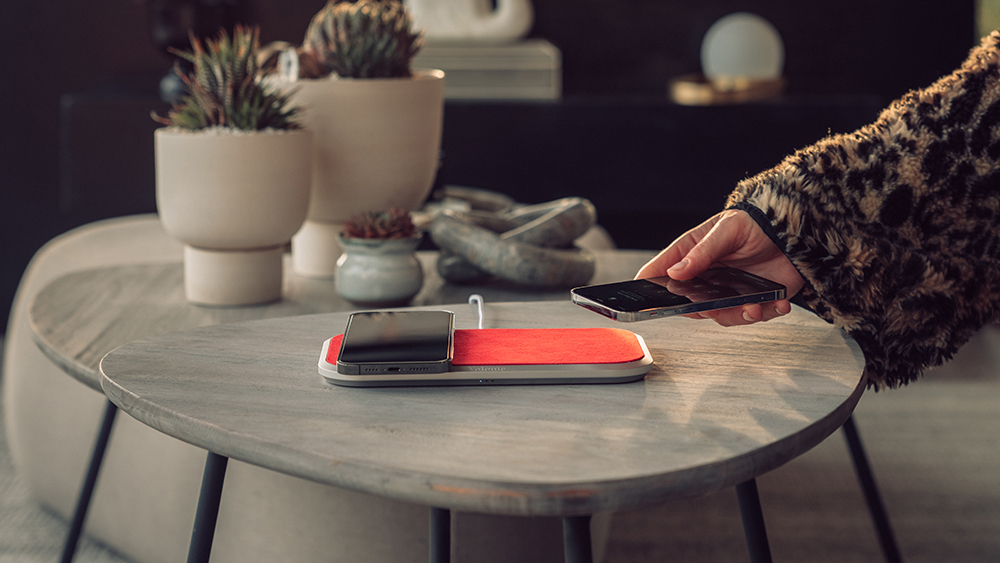 Call Shawn Dougherty the patron saint of emergency power. In 2005, the California-based entrepreneur co-founded Mophie, which was the first company to cannily combine a backup battery and a smartphone case. She sold Mophie five years ago; now, Dougherty has returned to the same market with a new startup, Volonic. Unlike mall staple Mophie, Dougherty hopes to establish Volonic as the first consumer electronics company focused entirely on luxury goods. Its first foray in that market: the Valet 3, a fully customizable wireless charging station that costs between $585 and $1,200.

Dougherty promises that the Valet 3 is a major upgrade from mass market alternatives, not only in form, but also in function. It’s equal parts cutting edge and high-end.

First, the tech. Wireless charging has long been problematic; see AirPower, the first-ever product Apple canceled before it was even released. Put simply, all wireless devices use a standard known as Qi, which relies on a silver dollar-sized metal coil that’s embedded in a charging station and any device intended to draw power from it. When two coils make contact, charging begins. The problem, per Dougherty, had always been precision. “For wireless charging to work, and for you not to lose tons of charging efficiency, you had to sit these coils—which you don’t even know are there—right on top of each other, like a bullseye,” she explains. While at Mophie, she even devised a workaround: magnets placed around the coils that invisibly helped ensure that alignment. Still, it was an unsatisfying fix, as magnets could sometimes scramble the compass in a smartphone.

Finally, Dougherty believes she’s unearthed a true solution. Known as FreePower, the entirely new approach was developed by a startup named Aira whose engineers worked not at Apple or Samsung, but at Taser. Their lateral engineering thinking resulted in a pad that contains 18 coils ranged across three layers; it allows the entire surface to offer wireless, on-demand power, wherever you put a handset. No more magnets, missed connections or wasted electricity.

Dougherty didn’t just focus on the innards of the new device, though. At Mophie, she’d already championed collaborations like those with Opening Ceremony, Supreme and Valentino. “When we went to Valentino’s headquarters in Rome, a lot of the creative designers weren’t even using smartphones yet,” she laughs. She even custom-produced a Swarovski crystal-studded limited edition juice pack, which she gifted to a small number of VIP clients. So Volonic’s look and feel was as important to her as its performance.

Log onto Volonic.com, and you can customize each element of the Valet 3—the frame, for example, which comes in aluminum or a glossy finish Shawn likens to a grand piano’s sheen. Cover the charging surface with your favorite shade of Alcantara, a durable, carbon neutral alternative to leather, or pick a trim to match your favorite wheels; Volonic has partnered with everyone from BMW to Lamborghini so that leathers will exactly match their interiors. Choose the length and color of the charging cord, too, and perhaps add a little bling with diamond feet. “I love those—I think I might have made those for myself,” Dougherty admits.

The just-launched Valet 3 is just the first product in Volonic’s portfolio. She’s already working on an ultra-small, customizable 60-watt power adapter aimed at globetrotters, as well as a travel case for both Apple watches and traditional timepieces which can charge or wind them both. And Dougherty also hopes to keep producing one-offs on a whim, like Valet 3 LE, with its solid gold frame, vicuna wool-covered charging platform and $250,000 price tag. “It didn’t sell, but it was a lot of fun, so we might do that again.” All power to her.