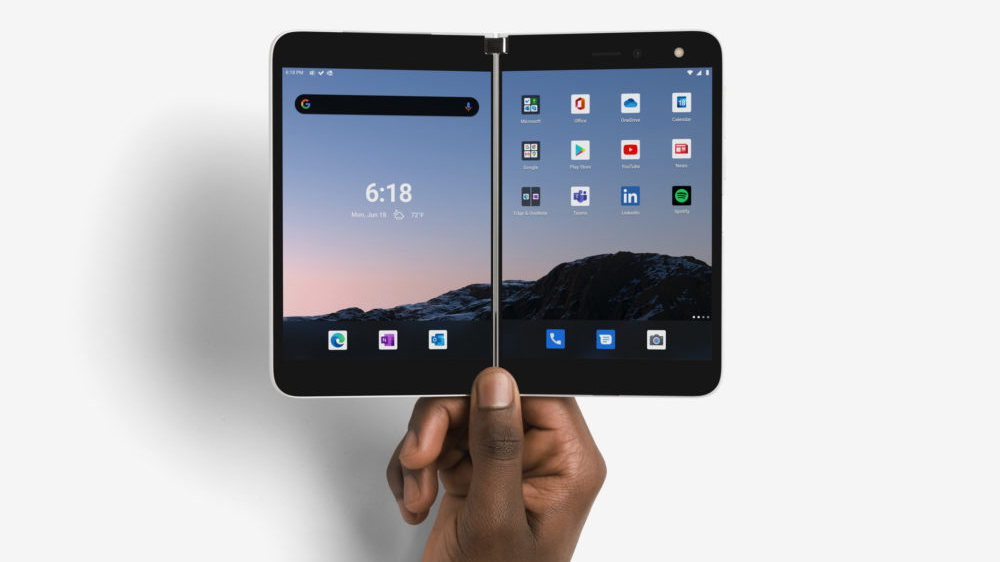 The reign of the foldable smartphone continues. Hot on the heels of Samsung, Motorola and TCL, Microsoft has announced a new origami-like model that may just be the thinnest yet.

Set to debut next month, the Surface Duo features two 5.6-inch OLED screens connected by a 360-degree center hinge. When unfolded, it’s just 4.8 mm thick, making it the thinnest folding phone in the world, according to the tech giant. Indeed, the svelte ringer shaves a good couple of mil off both the Samsung Fold and Motorola Razr, which measure 7.6 and 6.9 mm, respectively.

Aside from being ultra-thin, the design has a lot of other cool features on its side. First and foremost, the dual screens. Together, they measure 145 mm high by 187 mm wide and are basically like a mini-TV at your fingertips. Microsoft has worked hard to ensure that pixels are aligned across the two displays and even with a seam in the middle, the experience should be seamless. You can, of course, operate the screens independently and open two apps side-by-side (type a text on one screen while you watch YouTube on the other). The nifty 360-degree hinge also allows you to move the phone into any type of position to consume content.

If you’d rather create content, the phone is fitted with a camera on the internal display that can capture 11-megapixel photos as well as 1080p video. It also runs Android and is fitted with a Qualcomm Snapdragon 855 processor with 6GB of RAM to help it run efficiently. Microsoft says the Surface Duo has an all-day battery life with up to 15.5 hours of playback.

Navigating the phone looks to be a treat, too. The interface is quintessentially “Microsoft”—the apps have rounded edges and the layout is clean and modern—and the phone offers full access to the Play Store to bring you all the apps you need.

When it comes to looks, the Surface Duo pairs sturdy Cornering Gorilla Glass with a chic Graphite Gray colorway and is reminiscent of your favorite Moleskine notebook. The phone weighs just 8.8 ounces, which is relatively light considering the size of the screens.