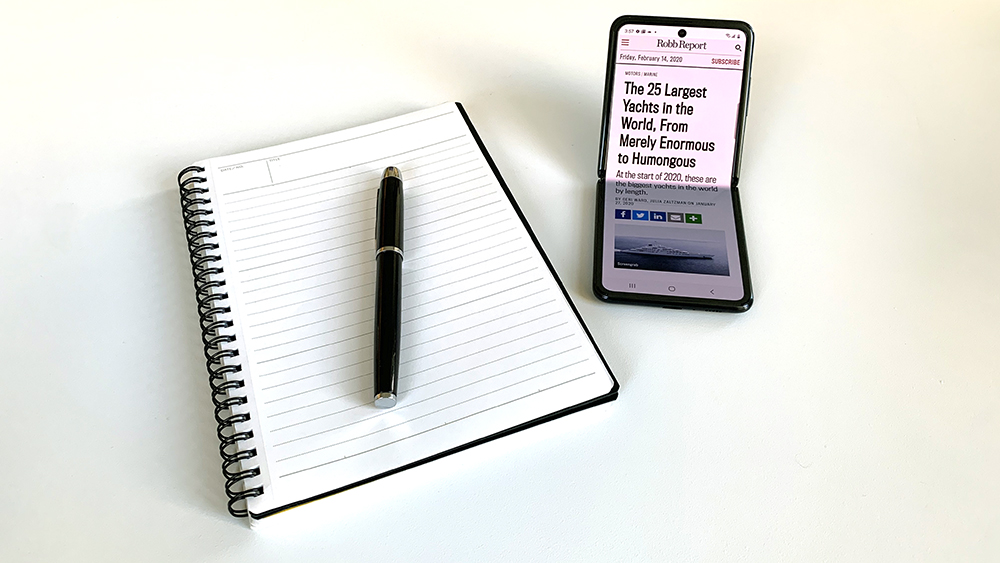 Less than six months after the release of its first folding smartphone, Samsung is at it again. Last week, the South Korean electronics giant unveiled the Galaxy Z Flip, a smartphone that folds shut like your favorite cell phone from 2004. But just because the company’s newest mobile devices share the same central gimmick doesn’t mean that they are alike.

In build quality and functionality, the new Galaxy flip phone feels sturdier and better executed than the Galaxy Fold. But that doesn’t answer an essential question—why do we even need a folding smartphone? After three days with the Galaxy Flip Z, we’re still aren’t quite sure.

A Different Phone Than the Galaxy Fold

Unveiled at last week’s Samsung Unpacked event, the company’s second folding device is markedly different from its first, the Galaxy Fold. While last year’s Fold closes vertically like a slim book, the new Z Flip folds horizontally like a clamshell cellphone. That difference is vital. The Fold allows users to fold a tablet-size screen so it can fit easily into your pocket. The Z Flip, on the other hand, unfolds to reveal… pretty much the same smartphone we’ve all gotten used to over the last 13 years. At 6.7 inches long, the screen is just slightly longer than the 5.8-inch iPhone 11 Pro. And the Flip’s 2.9-inch width is virtually identical to the iPhone 11’s 2.8 inches. So, basically it’s a smartphone that flips shut.

In fairness, while the Z Flip may have less screen real estate than the Galaxy Fold, there is some benefit to this. The new phone feels more like a premium device than the Fold we tried. The main reason? It actually unfolds completely flat, making the crease in the center of the screen much less visible. The design all but eliminates the jiggle that was so annoying on the Fold. The three-stop hinge—which completely disappears inside the phone when unfolded—also feels more secure and reliable than its predecessor.

Living Up to Its Name

Just as promised, the Z Flip folds great. It can be a bit tough to open with one hand, but once unfolded the device functions like any other Android smartphone. Unlike the Fold, which has a plastic screen, the Z Flip’s gorgeous “Infinite Flex Display” is made from Ultra Thin Glass, according to Samsung. There’s a bit of a bump in the center over the hinge, but it’s almost imperceptible when reading, using an app or watching a video straight on. At an angle or in a particularly well-lit room, it stands out more.

A lot has been made about whether or not the Z Flip, and the just-released Motorola Razr reboot, can withstand the rigors of everyday use. To be sure, three days isn’t enough time to judge, but during our short time with the phone, it felt equal to the task. The crease will almost certainly grow more pronounced over time, but the Z Flip feels sturdy. The company also claims that the display can withstand 200,000 folds, so depending on how frequently you check your phone each day, that should be plenty. (For context, if you folded the phone 10 times a day, the phone would give you more than 60 years of use, according to the company’s promise). You also won’t need to constantly open your phone thanks to a useful 1.1-inch OLED screen on the device’s cover, which displays notifications, alerts and texts when the phone is closed.

Samsung has also found some unique ways to take advantage of the Z Flip’s folding abilities. Especially cool is “Flex Mode,” a feature designed in collaboration with Google that allows users to split the phone’s display into two separate working halves. Users can also enable it with a simple swipe, dragging and dropping apps between display halves. The phone’s hinge, with its dual CAM mechanism, also functions like that of a laptop, allowing you to hold the phone open at an array of different angles.

But What’s the Point?

While Samsung has found a couple of interesting ways to take advantage of the Z Flip’s folding feature, the phone’s central feature still doesn’t feel all that necessary. The Fold may still be a rough draft, but it’s not hard to imagine a more refined version becoming the future of smartphones. The Z Flip, on the other hand, is a slightly longer smartphone when unfolded. And while there may be  something of a nostalgic thrill when you open it, how long will that really last?

If the idea of a flip phone excites you or you just really need that extra pocket space, the Galaxy Z Flip isn’t a bad choice. It’s compact and the folding screen impressed us. Unlike the Fold, it feels like a phone that’s ready for prime time right now. Considering how much we’ve all come to rely on our smartphones, that’s no small feat. Even better, at $1380, it’s $600 less than the $2000 Galaxy Fold. Of course, that price is also nearly $400 more than the cost of a new iPhone 11 Pro. At that point, the decision boils down to one issue—how much are you willing to pay for a little nostalgia?