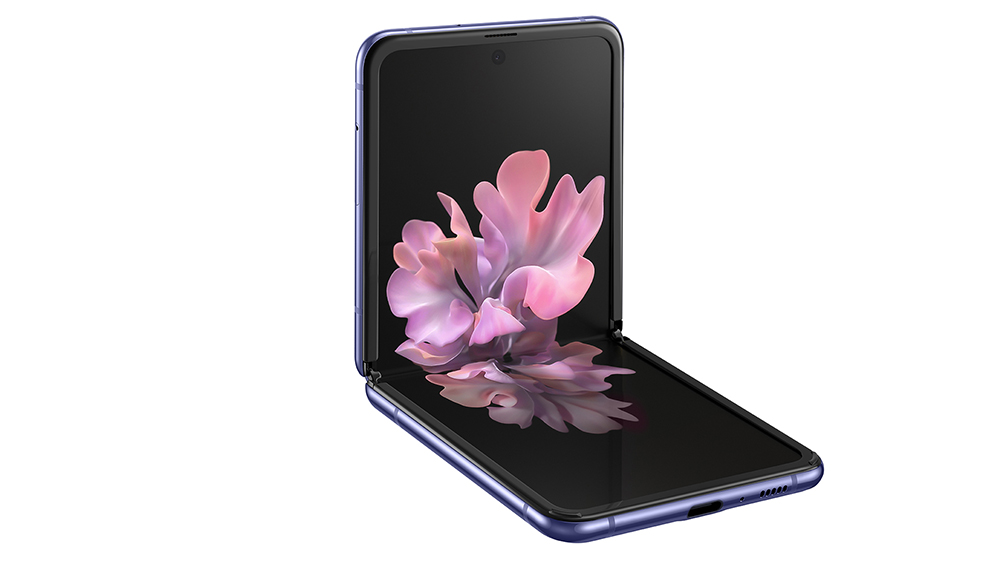 The worst kept secret in tech has finally been officially announced: Samsung is releasing another folding smartphone. Less than six months after the release of the Galaxy Fold, the South Korean electronics giant will launch the brand-new Galaxy Z Flip later this week.

Unveiled at the company’s Unpacked event in San Francisco on Tuesday morning, the Z Flip will go on sale this Friday, February 14. But while the device is the brand’s second smartphone that folds, it couldn’t be more different than its older sibling.

The biggest distinction between the two phones is how they fold. The Fold, well, folds in half like a slim book, while the Z Flip folds horizontally like the clamshell cellphone or of yore. Much like the just-released Razr reboot, this means that device takes up less space in your pocket or bag when closed.

It also means that the Z Flip also has a smaller screen than the Fold, measuring 6.7 inches. It’s got a 21.9:9 aspect ratio (2636 x 1080, 425ppi) and is completely notch free, unlike so many of its peers. But that’s not the only difference between the two displays. Instead of using plastic, like its predecessor, the newer device features a glass screen, a first for a smartphone, according to a press release. Samsung is calling it the “Infinite Flex Display” and claims that its bendable Ultra Thin Glass can withstand 200,000 folds. There’s also a small, 1.1-inch OLED display on the phone’s cover that will display notifications when it is folded and also be used as a viewfinder in camera mode.

Of course, considering the problems that plagued the Fold, and led to its release being delayed multiple times, a lot of attention is on the Z Flip’s hinge. The new phone features a three-stop hinge that works similar to the one you’d find on a laptop. Thanks to a dual CAM mechanism it will also allow you to hold the phone open at an array of different angles. Finally, the hinge is also equipped with special fibers that will help keep dust from getting inside.

The Z Flip has plenty of other modern smartphone features, including its 12-megapixel ultrawide and 12-megapixel wide-angle cameras on its back, along with a 10-megapixel f/2.4 selfie camera on the front. The phone’s software isn’t too shabby, either. In particular, “Flex Mode,” a UI designed in collaboration with Google, will allow users to split the phone’s display into two separate working halves. The phone can also multitask and give users the ability to drag and drop apps between display halves.

It’s still early, but the Samsung Z Flip already sounds like a more appealing alternative to the not-quite-there Galaxy Fold. And, at $1,380, the phone is also $600 less than its big sister.