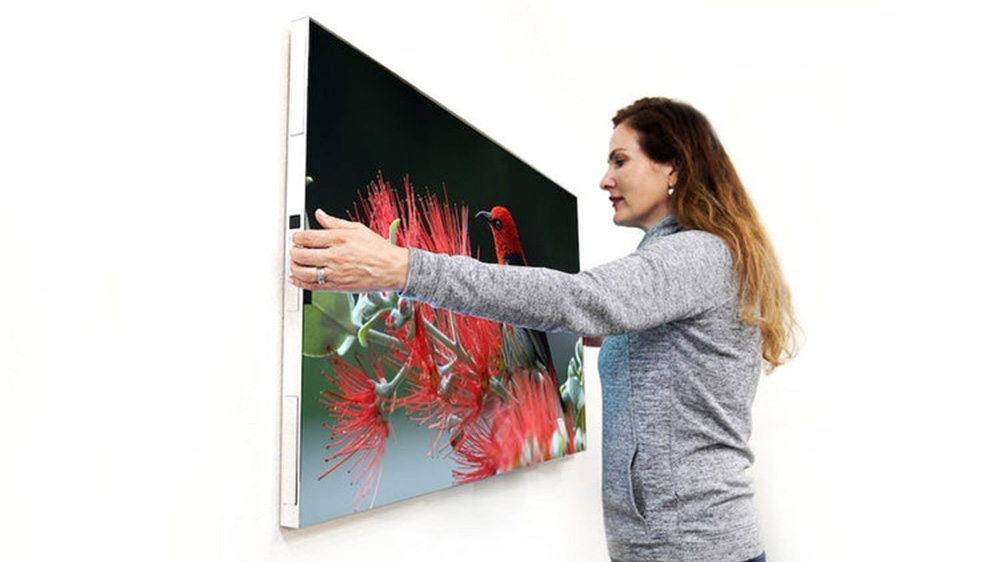 The start-up unveiled what it’s calling the world’s first truly wireless TV set at CES earlier this month. Not only is the device completely free of wires, but it also doesn’t have any ports or even require a remote.

TV makers have been doing everything they can to maximize display space for years now, but Displace has taken things to a different level. The company’s new set, which is called the Displace TV, is just an OLED panel with a barely visible bezel along the very edge of the device. Even some vital elements that all TVs would presumably need to have, like a stand or mounts, are missing. That’s because the set can vacuum seal itself to any wall or window. You don’t have to worry about placing it over an outlet, either, since the device gets its juice from two “hot-swappable” battery packs you switch out every month for others that are fully charged.

The Displace TV’s lack of wires and ports may be one of its main selling points, but it appears that it will also compete with other high-end wall-mounted TVs in its class. It features a high-performance, 55-inch 4K OLED panel made by LG, according to New Atlas. That’s not all that big by today’s standards, of course, but if cinematic size is your aim, you can put together four of the sets to form a 110-inch 8K display. Still not big (or crystal clear) enough? The company also says eight can be put together to form a monstrous 220-inch screen with 16K resolution. Whatever the size you choose, it can be controlled by touch, voice or gesture, the last via a retractable camera that pops out of the top of the device.

Ready to finally rid your TV setup of any and all cords? You can reserve the Displace TV directly from the start-up now. Pricing starts at $2,999 for one TV, $5,399 for two and $8,999 for four. A refundable 10 percent deposit is required upfront.