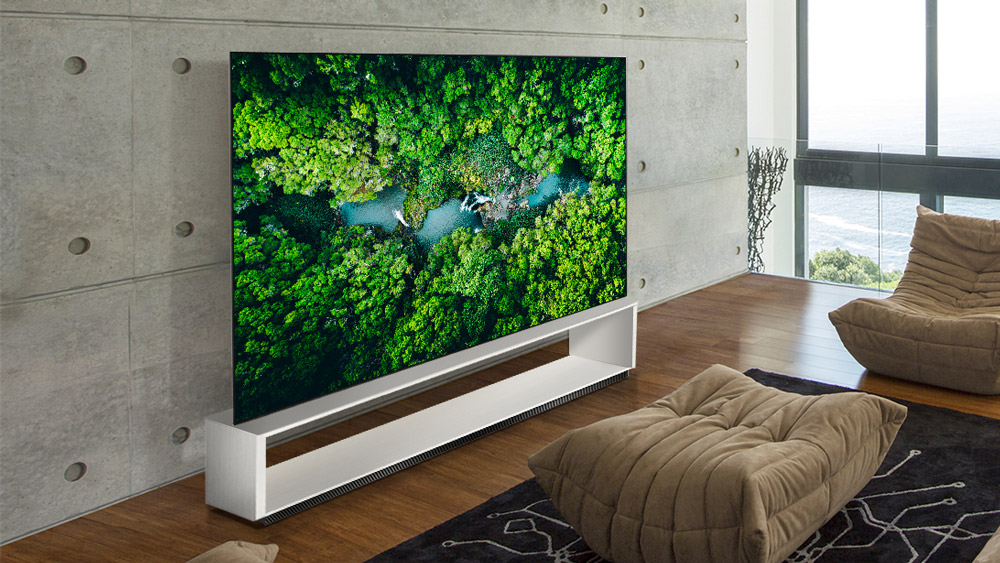 Photo: Courtesy of the LG Corporation.

Like opening a window to a panoramic landscape, the new LG Signature OLED 88ZX—debuted at the 2020 CES in Las Vegas and recipient of a 2020 CES Innovation Award—brings important industry firsts to the category of state-of-the-art television. For viewers who appreciate size, the LG is the world’s largest OLED TV, with an ultra-large 88-inch screen, and has plenty of high-tech behind the remarkable picture. Developed and produced by LG, the Organic Light Emitting Diode (OLED), which greatly enhances clarity and resolution, produces a display that is brighter, with outstanding black levels, higher contrast and faster refresh rates than the ubiquitous Liquid Crystal Display (LCD) flat panel screen technology commonly used in today’s TVs and computer monitors.

Advanced 8K Ultra High Definition (7680 pixels × 4320 pixels) offers the highest resolution; 33 million self-emitting pixels and 130 million sub-pixels provide four times the resolution of 4K. Unlike LEDs, each pixel can be controlled individually to create extremely precise images with more accurate color, infinite contrast and perfect blacks. On the 88ZX, images are rendered in great detail and in vivid color, evoking a palpable sense of three-dimensional realism, as if one were transported into a theater, stadium or concert hall.

LG Deep Learning AI provides access to a selection of popular artificial intelligence services across multiple platforms, including built-in Google Assistant, as well as Amazon Alexa and Apple AirPlay 2. And conversational voice recognition and an intuitive Home Dashboard allows users to control a wide variety of smart home devices directly from the TV.

With a powerful output of 80 Watts, the 88ZX offers exceptional sound quality, augmented by an intelligent algorithm that can up-mix two-channel audio to deliver convincing virtual 5.1 surround sound, and features Dolby Atmos for an even more immersive sonic experience for movies and music. The TV intelligently sets ideal levels based on its positioning, and optimizes sound based on content type, making voices in movie soundtracks and news broadcasts more audible.

One notable attribute of this 88-inch TV is its ultra-thin profile. The bezel surround of the screen is quite minimal, allowing the TV to almost disappear as a three-dimensional component, almost floating as if it were a sheet of paper. The sleek design features premium metal details, and is particularly suited to minimalist architectural interiors.