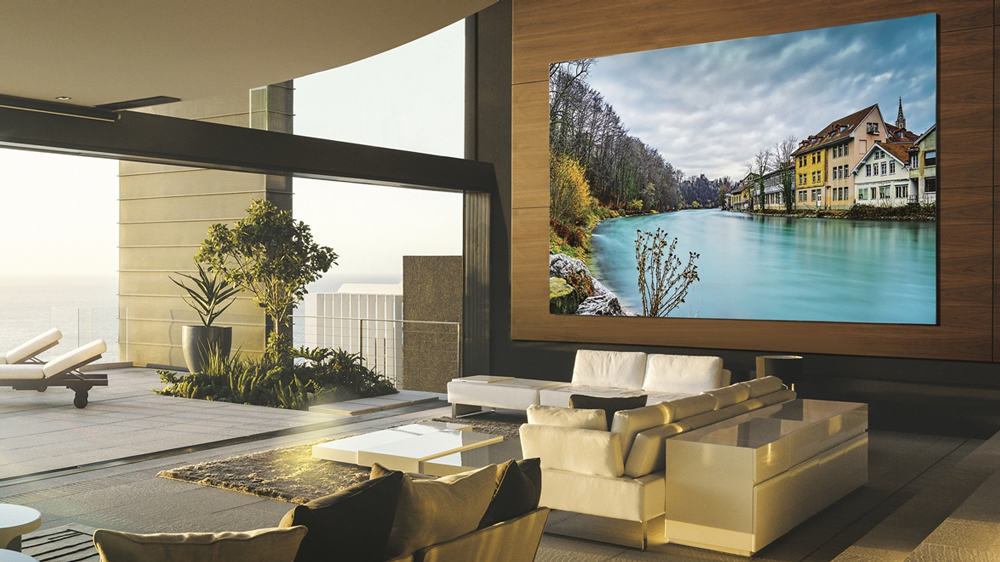 When does a TV stop being a TV? When it’s the Wall by Samsung. The Korean electronics specialist recently showed off its display technologies to the yachting market.

The new 146-inch stunner invokes a term as yet unfamiliar to the broader TV-buying audience: micro-LED. It’s the closeness of the smaller light-emitting diodes (LEDs) to each other—called the pixel pitch (the distance between the centers of adjacent pixels)—that determines how good the resolution is. The Wall has a pixel pitch of 0.84 millimeter, whereas most screens range from 1.5 to 3.0. The result is otherworldly, a hyper-real digital surface for TV, art, and interactive experiences capable of changing an entire room.

The Wall is composed of micro-tile technology (screens made of stacked modules that hold 16 tiles apiece), which means it can be scaled to fit any space. Each tile can be removed and replaced, making maintenance a breeze. And it has a 100,000-hour lifespan, so even if you used it 24 hours a day, it would last more than a decade. Next month, customers will be able to order the Luxury version of the Wall, which was optimized for the home-consumer and superyacht markets. The key difference between its two models, Pro and Luxury, is the number of frames per second: The Pro runs at 60 fps, and the Luxury option will hit 120. The Luxury model is also slimmer.

No surprise: The creative potential did more than pique interest within the superyacht industry. The first-ever Wall on a superyacht is slated for installation next month. In addition to an improved version of the standard version of the modular Wall display, Samsung also introduced a new 98-inch 8K QLED TV at CES this month.