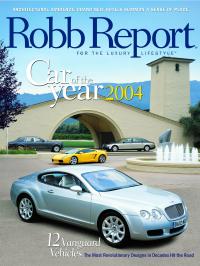 Architectural ambience: grand new hotels summon a sense of place.  And, 12 vanguard vehicles, the most revolutionary designs in decades hit the road.

The career of furniture designer Maxine Snider is a case of life imitating art. Snider first became enamored with early-20th-century French furniture while eyeing the sketches by furniture designers Jacques-Emile Ruhlmann, Jean Prouvé, and André Groult at the Musée d’Orsay’s research library.   The year was 1997, and she was in Paris while her husband, […]

Appliances: At Your Service

Clothes may make the man, or woman, but what about their upkeep? Too often, little, if any, thought is given to the maintenance of these valued image shapers. With the best of intentions, most garments are dry-cleaned or laundered so often that the fabric is permanently damaged.   “We know from research that the majority […]

In audio circles, Jeff Rowland Design Group is to two-channel hi-fi as Brooks Brothers is to button-down collars. Now, however, the Colorado Springs, Colo., company is venturing into home theater territory, which, to extend the analogy, is equivalent to Brooks Brothers releasing an haute couture line. It is out of character—or, at first glance, appears to be.   For nearly […]

The waitress smiles as she places a loaded water pistol on the breakfast table in the dining room at St. Lucia’s Ladera Resort. “It’s for the birds,” she says. The view from the table is unblemished by obstacles such as walls. You take your morning coffee while gazing down upon Jalousie Bay, its blue Caribbean […]

Miami gallery owner and hotelier Diana Lowenstein was surprised when, in early 1998, she heard the news: The venerable Ritz-Carlton chain wanted to turn the DiLido Hotel, which she and her family had owned since 1973, into one of its properties. Lowenstein knew that changes would be on the way for the 11-story hotel, a […]

Unless a restaurant is especially busy, most chefs are willing to accommodate a patron’s special request. One dish, however, is often craved but seldom provided: an ashtray. As he steps outside a London restaurant on a blustery night to light a Partagas Serie D, Italian importer Enzo Natali says he is becoming accustomed to the proliferating […]

A May rainstorm was turning to snow, and I had another 12 miles to hike before lunch. Pushing through the glazing mud, I consoled myself by remembering that countless thousands from the far ends of Europe, many barefoot and threadbare, had preceded me up this steep, forested pass in the foothills of the Basque Pyrenees. Yet […]

She lies nude and asleep upon draperies of red and white, one arm coiled around her head. A small cluster of buildings is in the distance, but she has chosen to nap here, in the open, under a cloudy blue sky. She appears divine, as she should; she is Venus, the goddess of love. Her […]

It may seem sacrilegious for a golfer to visit the Monterey Peninsula and not stay or play at Pebble Beach. But an excellent alternative to that sacred ground along Seventeen Mile Drive has long existed just a few miles east in Carmel Valley. After completion of a major refurbishment in July, the Quail Lodge is […]

Purchasing perfume as a gift always frustrates me. Every time I walk away watery-eyed from the trendiest boutiques, assured that I’ve just acquired the latest and most exotic, I am later told in no uncertain terms that I missed the mark by a wide margin. My lady friend, you see, just loves fragrances, and she […]

A Flourish for Ferrari

The fountain pen and the stick shift are two 20th-century inventions that hold their appeal for purists. A beautiful writing instrument, after all, affords a tactile satisfaction not unlike the pleasure of a manual gearbox exploiting an engine’s precise power band—a sensation absent from both the soulless keyboard and know-it-all automatic transmission. As these commodities, […]

High in the Andes mountains of southern Peru, a skittish herd of deerlike vicuñas madly dashes from left to right in formation, desperately seeking a break in the circle that is slowly closing in around them. The human chain of more than 400 participants clasping hands shifts clumsily while trying to block the doe-eyed animals’ […]

Car of the Year 2004: Lamborghini Gallardo

The Lamborghini Gallardo is my hands-down “Car of the Year” winner, simply because it does its job as a sports car so well—and its beauty seals the deal. The styling is fresh and new, not a hackneyed retro-pastiche or a caricature such as Ferrari’s Game Boy Enzo. Those Audi-phobic detractors claiming that Italian heritage is […]

Anyone who has lived with Porsches knows that they represent the best real-world solution to sports car ownership. I have always thought that it is precisely because they do everything so well but so differently, without cowing to styling trends and me-too clichés, that they excite either ire or lust and not much in between. […]

The passenger seat of the Lamborghini Gallardo is no place for a stenographer to call home. As Ron Jackson, president of Girard-Perregaux USA, rocketed the Gallardo through turns and along straights, I scribbled down his impressions of the car. “Let’s go around again,” Jackson said as he completed the circuit. “That was fun.” Not for […]

Car of the Year 2004: Rolls-Royce Phantom

When BMW assumed ownership of Rolls-Royce Motor Cars, many loyalists despaired that the heritage-laden British marque would soon sprechen Deutsch. The Bavarian firm has taken pains, however, to ensure that the unapologetic luxury in the Phantom, its first new Rolls-Royce offering, speaks the Queen’s English with a satisfyingly plummy accent. In the same way that […]

In our field of finalists, which includes ocean liners masquerading as automobiles, vehicles sporting shades of yellow that beg for the attention of speed-monitoring law officers, and machines designed with lines edgy enough to belong in a cutlery cabinet, the Audi RS6 appears relatively inconspicuous—which, for some drivers, is its most attractive attribute. One of […]

Mainstream BMWs have typically been safe, three-box designs—handsome but never sensual, clean and catchy without being really clever or truly eye-catching. The 645Ci coupe, however, exorcises all that has been BMW bland for too long and begs a standing ovation for being first-cabin, soul-deep, triple-distilled gorgeous. Remove the roundels on the hubs and the […]

Improvements to the Jaguar XJR are so impressive that they should have made this car a serious contender. Sadly, the modifications for 2004 are not readily apparent, and so the car stands as a dowager of design: same old exquisite lines, same old peerless leathers and woods, same old engine that purrs before it […]

Building an SUV might not have seemed an obvious choice for Porsche; when announced, the news prompted head-scratching, even amid the extreme vogue for SUVs. (Lamborghini did set a precedent in the 1980s with its LM, but that was a supercar anomaly.) The Stuttgart automaker famous for rear-engine, 2+2 sports cars nevertheless attacked the category […]

The number of smiles the Impreza WRX STi inspires is inversely proportionate to the amount of dollars that Subaru is asking for its purchase. In terms of performance versus its 11 “Car of the Year” competitors, the Subaru stands unchallenged when delivering bang—in this case, a seriously turbocharged fourbanger—for the buck. Consider the Audi RS6, […]

Cadillac’s stylistic renaissance, which began with the CTS sedan several years ago, continues in earnest with the stunning XLR. The new familial design vocabulary of sharp creases and broad planes—combined with plenty of swoop—works especially well on the large roadster, which may be the company’s most important design since the elegant Eldorado in 1967. […]

Morgan, the oldest family-owned carmaker in the world (founded in 1910 by the grandfather of present owner Charles Morgan), enters the 21st century offering its state-of-the-art Aero 8. Such longevity represents a colossal achievement given the esoteric nature of this British marque and the stifling requirements that today’s car builders must meet. Yet Morgan has […]

Back Page: Whither the Exotics?

Like a vehicle model that remains in production for 11 years, Robb Report’s “Car of the Year” feature has evolved considerably since its debut in 1994. While remaining inclusive—a Subaru was among this year’s 12 finalists—the field of competitors has also become more exclusive—we judged a BMW 6 Series this year, not the 5 or […]

Aircraft: Power to the People

For a stretch of time in the mid-1990s, the U.S. Coast Guard was confronted with a dilemma that the Italian-made Agusta A109 Power helicopter eventually helped solve. Caribbean smugglers were using high-powered speedboats to transport as much as two tons of drugs per shipment. Traveling at speeds of 50 mph or faster, they regularly outran […]

he introduction of the braw and brawny Bentley Continental GT has been a tease probably unmatched since Eve elevated the apple into foreplay. After four years of recitation, the vital stats and catch phrases associated with the Continental GT are familiar to even casual followers of the new Bentley breeders. It is an ungoverned, 198 […]