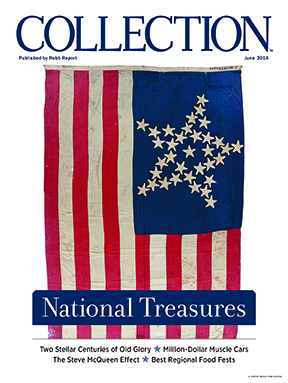 $3.63 Million 1968 Porsche 907 Longtail In keeping with its reputation as the champion of more endurance races than any other marque, Porsche dominated Gooding & Co.’s auction at the 19th annual Amelia Island Concours d’Elegance in March with first-andsecond-place sale figures, beating its closest competitor, a 1955 Ferrari 250 Europa GT, by more than […]

As anyone who loves single-malt whisky knows, even the most readily available drams—such as Macallan 18 Year Old and Lagavulin 16 Year Old—have seen dramatic increases in prices. The phenomenon is even more pronounced among the rarefied out-of-production classics, such as the 1964 Black Bowmore, a whisky that was first released at 27 years old […]

Subscribe now and get up to 61% off the cover price. Includes digital magazine access and the exclusive Robb Report tote bag.

Seven or eight years ago, while on summer vacation in northern Italy, Gianluca Baldo was stung by a wasp, and he was never the same again. A friend surprised him with the gift of a vintage 1976 PX 200 Vespa—because vespa means “wasp” in Italian. It was not the same model as the Vespa scooters […]

Ben Zaricor collects American history and identity, in fabric form. He owns one flag that has not just been to the moon—it was “postmarked” on the lunar surface with tire tracks. He owns two banners that flew on the presidential limousine on the day President John F. Kennedy was assassinated in Dallas. Most impressive, he […]

Rob Kauffman opens the door into his automotive showroom, and it is hard to know what to drool over first. Corvettes, Mustangs, Camaros, Firebirds—250 or so of the greatest expressions of speed, power, and ingenuity Detroit ever produced—glow as if they just rolled off the production line. Some of these cars are in Kauffman’s personal […]

In the spring of 2006, Mark Osborne, the head of Bonhams’ motoring department, stepped inside the Lake Havasu City, Ariz., home of Barbara Minty to appraise a few pieces of motorcycling memorabilia that had belonged to her late husband, Steve McQueen. In particular, Osborne was eager to see McQueen’s Belstaff motorcycle jacket, which the actor […]

Lightning in a Bottle

The agaves are piled 3 feet high, shorn of their sword-like paddles and stacked on the precipice of a pit lined with volcanic rock and radiating heat like a subterranean furnace. Each piña—as the agave hearts are called, because of their resemblance to enormous pineapples—represents about eight years of slow growth and a harvest so […]

From the briny perfection of May River oysters to the cutting-edge cuisine of California’s top chefs, food festivals from coast to coast are celebrating American regional cooking. The best of them feature marquee culinary talent, exciting local ingredients, and deep culinary traditions—yet maintain an intimate scale that lets visitors truly get to know the food […]