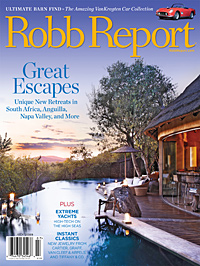 Valentine Reyes unlocked the massive rolling doors, shoved them open, and smiled. “There are a lot of memories in here,” he said. Once my eyes adjusted to the light, I blinked. Spread out before us was what could be called the world’s greatest barn find—or, to be more precise, warehouse find—comprising nearly two dozen […]

Michael Chiarello may be a native of Northern California, but he is a son of southern Italy. “I grew up in a household that spoke and lived Italian,” says the 47-year-old chef, who—in addition to cooking in his new Bottega restaurant in Yountville, Calif. (see “Grape Awakening,” page 86), cultivating grapes for his Chiarello Family […]

Subscribe today and get an extra 15% off! Comes with digital magazine access and the exclusive Robb Report double wine bag. Offer ends soon.

The key to the future can often be found in the past, as many of the world’s most illustrious jewelry houses demonstrate each time they open their archives in search of inspiration for new designs. Certain pieces of jewelry achieve classic status not because of their ubiquity but because of their enduring appeal to the […]

Rare-book collectors have made the wood-paneled galleries of Bauman Rare Books in Philadelphia and New York their preferred destinations for decades. Bauman now offers these collectors a new destination in an unlikely place: Las Vegas. Bauman’s latest gallery opened in February 2008 at the Shoppes at the Palazzo, alongside such retailers as Fendi, Guerlain, and […]

Only a handful of stores and tailors construct bespoke suits of the highest quality—suits tailored to fit the client like a second skin. This deficiency in the marketplace contributes to what Italian textile maven Luca Trabaldo Togna sees as a lack of men who truly appreciate the fine art of bespoke tailoring. He hopes to […]

When Le Cirque opened in 1974, it received immediate criticism. Its proprietor, Sirio Maccioni, was not “democratic” in his seating practices—ensuring that the best tables went mainly to the beautiful, the famous, and the powerful—and, as The New York Times reported, its fare was more bistro-type than fine French cuisine. At the same time, Le […]

Aviation: Fit for a King

Wink Hartman, a Wichita-based businessman who owns several energy companies and a health-care facility, logs many hours aboard his King Air 350, traveling from Kansas to operations in Texas, Oklahoma, California, and Florida. “We use it all the time—up to 60 hours some months,” Hartman says. He has been so impressed with the aircraft since […]

Travel: Restored to the Throne

The tropical rain oscillates between drizzle and downpour as Bill Tapia takes the stage, ukulele in tow. He steps dexterously over electrical cords to reach his stool and, after readying his instrument and voice, begins to play for the 1,000 or so guests at the reopening gala of Waikiki’s Royal Hawaiian resort. It is clear […]

“The lifeblood of a designer is to keep things moving,” says Frank Nuovo, creative director and designer for Vertu, the high-end mobile-phone brand he launched in 1998 when he was head of design at Nokia. For the last decade, Nuovo has kept Vertu and its product line moving forward, both creatively and relentlessly. His latest […]

Autos: One for the Road

The last of anything—a picture show, a Mohican, or an out at Yankee Stadium—is inevitably a cue for remembrance. Now so is the 2010 Bentley Arnage Final Series, a three-ton luxury sedan with mirror-matched woods and leathers chosen by caressing hands. It is the last such luxury sedan from the company that created the luxury […]

Watching master distiller Jim McEwan in Bruichladdich’s Islay bottling hall is not unlike observing a loving parent prepare to send his children out into the world. He is attentive and protective, yet shows no anxiety when the time comes to let his whiskies go. This is true whether the Bruichladdich offspring in his care have […]

Imagine a bowl of ramen that suddenly comes to life, its tangled squiggles rising up and taking the shape of a chair. Odd though it is, this was the idea behind Noodle, one of the latest offerings from Kenneth Cobonpue, whose eponymous design firm is based on the island of Cebu in the Philippines. Noodle […]

It’s easy to drive right past the headquarters of Farbio Sports Cars, the United Kingdom’s newest—and perhaps coolest—maker of exotic cars. A wooden plaque more suited to a nature reserve than a car-manufacturing plant marks the entrance. But such a subtle sign also seems appropriate, given the facility’s location in the rolling, green Cotswold Hills, […]

FrontRunners: Writing with a Twist

Watchmaker François-Paul Journe concluded that pen caps, though necessary for protecting fountain pens’ nibs from damage and writers’ clothing from ink stains, are impractical because they are easily misplaced. Thus, for his first collection of F.P. Journe Writing Instruments (www.fpjourne.com), which he released late last year, Journe invented a complicated system in which one end […]

Mercedes-Benz is bringing back the gullwing doors that helped make the 1950s-era 300SL coupe one of the most sought-after collector cars. The doors will be among the distinguishing traits of the all-new Mercedes-Benz SLS AMG (www.mbusa.com), which the company will unveil in September at the Frankfurt Motor Show. Like its ancestor, the SLS AMG will […]

IWC established its bona fides as a maker of modern mechanical watches in the 1980s with its original Da Vinci, which offered the then-novel mix of a chronograph and a perpetual calendar. The firm’s second Da Vinci is even more impressive. The IWC Da Vinci Perpetual Calendar Digital Date-Month (www.iwc.com) incorporates a new case and […]

By adjusting to the nuances of your swing—and exploiting the laws of physics—these three new drivers promise to help you hit the ball farther and straighter. The $500 TaylorMade R9 (www.taylormadegolf.com) allows you to change the face angle, loft, and lie of the club head. Eight head positions times three weight combinations equals 24 options—and […]

Tahitian and South Sea varieties might be the most valuable types of pearls, but their traditionally round shapes did not fit the vision of jewelry designer Nicholas Varney (www.nicholasvarneyjewels.com). Instead, for his latest line, Varney used organic-shaped Mississippi River pearls. “I went to New Orleans to capture the tenor of the origin of these pearls,” […]

FrontRunners: From the Robb Cellar

The function of the punt—the depression in the bottom of a wine bottle—is a contentious topic. Theories about its purpose range from increased strength or balance to the suggestion that it once served as a mechanism by which servants conveyed secret messages to their masters. Celani Family Vineyards, however, has removed some of the design’s […]

By The Editors
Men's Fashion

When the 80-year-old Swedish shirtmaker Eton (www.etonshirts.com) opened its first U.S. store earlier this year, at New York’s Plaza Hotel, it offered some big men immediate gratification: The brand offers shirts with 20-inch necks and extra-long arms—sizes that usually have to be custom-made. Eton carries 30 fabric prints in its store and has 200 other […]

By The Editors
Art & Collectibles

From the Editor: Wall Street’s Witch

If the press now delight in deriding the devils of Wall Street—those bankers or hedge-fund managers whom the public deems responsible for the ongoing financial crisis—they derived equal pleasure in the late 19th and early 20th centuries from their pillorying of that peculiar district’s “witch” for her parsimony. The Manhattan papers dubbed Henrietta “Hetty” Howland […]

A little more than a year ago, the old stone building on Yountville’s Washington Street, between Starkey Avenue and Pedroni Street, resembled the excavation of a medieval tower. And like a zealous archaeologist, its owner, Michael Polenske, led a hardhat-clad group through the hollow shell to view its exposed beams and bare dirt floors, along the […]

Although George Calvert Yount obtained his Spanish land grant (the first in Napa Valley) in 1836, the town that bears his name remained little more than an agricultural outpost until the arrival of the railroad in the late 1860s. With the rails came new immigrants, such as the Bardessono family and Charles Rovegno, whose residence […]

Just outside the nine suites at Banjaar Tola, tigers roam through dilapidated temples, monkeys swing from trees, and, as if from a scene in The Jungle Book, young boys pilot elephants through thick brush. The lodge, which overlooks Kanha National Park, is the latest of four camps opened by Taj Safaris in central India, where […]

Headliners at San Diego’s House of Blues have been vanishing from the venue ever since Sè San Diego, a 184-room high-rise hotel, opened next door in December. A subterranean passageway links the concert venue to the hotel, where an elevator can whisk performers up nearly 20 stories to the three-floor, 8,400-square-foot Grand Penthouse Suite. Sharilyn […]

Though once a gathering place for pirates, the pristine cove that is the setting for the Four Seasons Resort Seychelles is now perhaps the most peaceful stretch on Mahé, the main island in the Seychelles chain. The hotel, which opened in February, has 67 accommodations (all individual villas or multiroom houses called “suites”) that sit […]

Subtlety is not typically a trademark of Kelly Wearstler’s designs. But for her latest endeavor, the Viceroy Anguilla, the Los Angeles–based designer drew inspiration from the laid-back Caribbean island. “I didn’t want it to be a giant elephant on the island,” says Wearstler of the 35-acre resort and residential project, which opens in July. “It’s […]

While navigating a dirt road in the Madikwe Game Reserve, in South Africa’s North West Province, Greg Lederle receives a call on his open-top Land Cruiser’s short-wave radio: Two lions are lying in a shaded area only yards from the electrified fence that surrounds the Molori Safari Lodge property. Lederle, a field guide and the […]

The moment tom perkins first took the helm of Maltese Falcon marked the culmination of his quest to create a new breed of mechanically sophisticated sailing superyachts. In 1999, Perkins—a venture capitalist and a former director of Hewlett-Packard—declared that he wanted to build a sailing yacht that would employ the DynaRig concept, a square-rigged sail […]

One can easily imagine the moment of creative epiphany that occurred when a Cartier designer looked up at a rotating billboard and realized that the same concept might make an interesting dial for a watch. Cartier’s Santos Triple 100 (800.227.8437, http://www.cartier.com), priced at $300,000 and limited to 50 pieces, employs a miniaturized version of the […]

No sports car asserts the spirit of the American hot-rodder more clearly than Carroll Shelby’s original AC Cobra. Born in an era when brute power and handling finesse were mutually exclusive objectives, this lightweight, aluminum British roadster with a potent Ford V-8 engine achieved both, proving formidable on the street and track. In 1962, Shelby […]

Domaine de la Romanée-Conti’s relatively modest acreage required an immodestly long time to assemble. Although the vineyard from which the domaine derives its name was first planted by the Abbey of Saint-Vivant in the early 13th century, the man responsible for shaping the entity that many collectors now regard as the world’s greatest wine producer […]