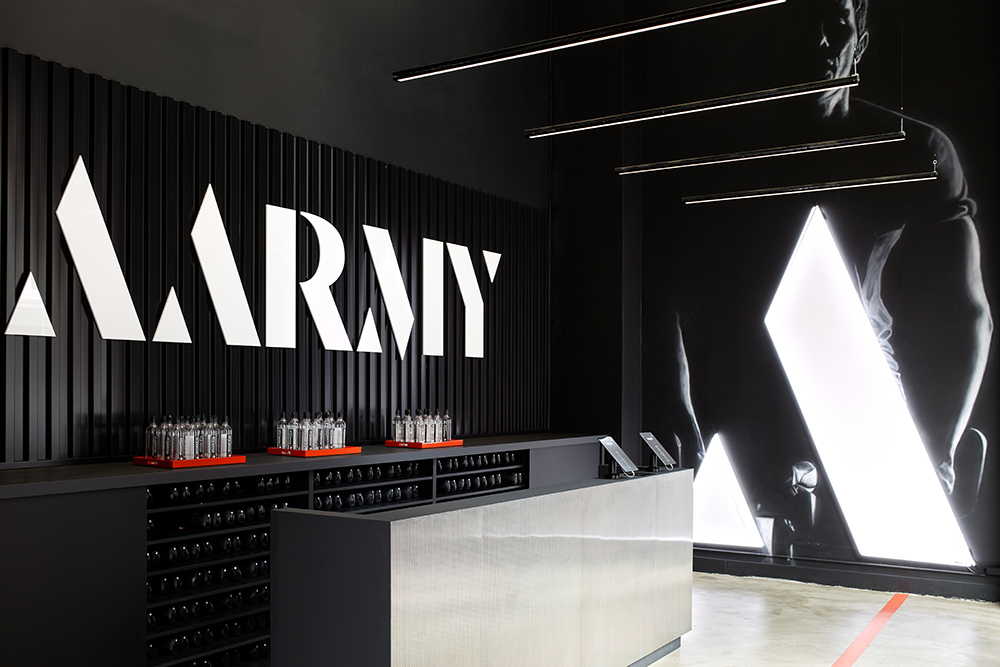 In New York City, it’s possible for many worlds—however seemingly disconnected—to collide at once. If the metropolis acts as a testing ground for two things, they’re surely fashion and fitness, considering it houses a massive populated deeply invested in both. And that’s what makes the launch of AARMY, a new boutique fitness studio from Akin Akman, Angela Davis and Trey Laird, seem so natural and so timely.

After experimenting with a trial pop-up in September of last year, the trio officially launched its new concept today with a temporary facility in New York’s Soho neighborhood. A permanent space is expected in spring 2020. AARMY, a name reflecting Akin, Angela and the army of followers they’ll undoubtedly bring to the new space, aims to create a new category of training steeped in community and team-building. The intended effect is to establish “an inclusive environment to promote a higher standard in our physical, spiritual and emotional state,” the new company said in a press release.

The AARMY training experience revolves around four customizable modalities: high-intensity cycling for endurance and cardio training; a range of boot camp classes for overall conditioning; team lifting circuit classes for strength training; and stretching programs for recovery. All of these will be available at the NYC flagship location, and a second pop-up will open in West Hollywood early next year.

The focus on community and spirituality fused with a tough-as-nails regime might be what best sets AARMY apart from its competition. “We don’t have teachers, we have coaches,” Akman, a former model and professional trainer, told Robb Report. “We don’t have classes, we have practices. We speak to mental conditioning as well as motivation but we speak to it when we teach you the foundations.  It’s more of a practice for life.”

But that unique melding coupled with its ample style makes sense given its founders. Both Akin and Davis grew up training to become professional athletes before formally coming to the world of fitness, gaining a strong celebrity following along the way. Davis, a former member of the USA Track and Field team, has trained Oprah and Beyoncé, and Akman counts Karlie Kloss and Jake Gyllenhaal among his fanbase.

Tying them together is Laird, one of fashion’s most in-demand branding and ad experts, who has spent decades working with clients such as Calvin Klein and Tom Ford. His inclusion in the leadership might appear unusual at first glance, but for Laird, it’s perfectly logical. “Fitness is now a major cultural force that touches every part of our lives, but surprisingly…when it comes to content, the category is incredibly dated,” he said. “Everything looks like a formulaic infomercial. Why can’t it have the same level of visual sophistication, style, energy and emotion as the best creative in music, fashion or art?”

Take a look for yourself and join the crew to break a sweat at 636 Broadway in New York City. Classes start at $38.