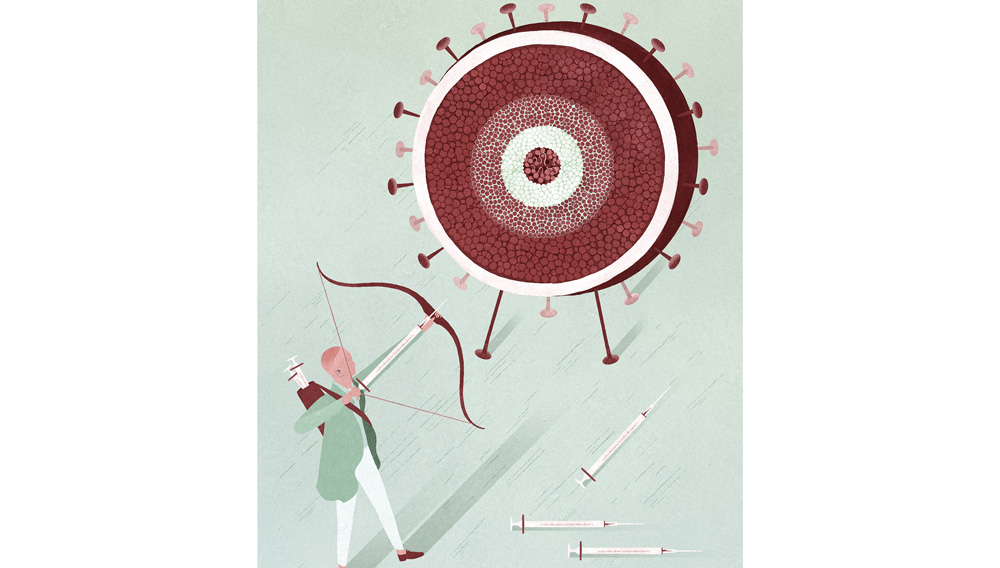 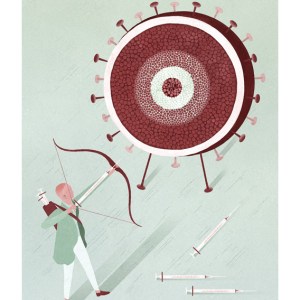 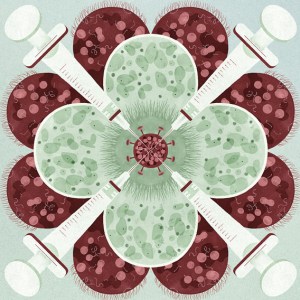 Cancer cells are clever. Researchers characterize them as wily, smart, sneaky, and stubborn. But what cancer cells are not is impervious to damage and even death by targeted assault, which is why chemo- and radiation therapies can be so effective: They use chemical concoctions and X-rays, gamma rays, or charged particles to directly attack tumors. Yet those treatments cannot distinguish between cancerous and healthy cells, and ensuring they hit only their intended marks is challenging even with focused radiation. Further, the side effects that accompany both therapies are legion. Excising tumors also has mixed success, since any stray cells left behind can and often do regenerate. With human cancers having such extensive heterogeneity, it is unlikely there will ever be a single agent or even two that will eradicate all of them.

One novel option, immunotherapy, engages the body’s own immune system to confront the disease. Immunotherapeutic drugs attach to cancer cells, rendering them visible to the immune system, or block growth signals that would otherwise allow tumors to increase in size. The earliest studies proved successful in treating breast cancer and non-Hodgkin’s lymphoma, and in March of this year the first immunotherapeutic drug to treat a pediatric cancer—neuroblastoma, which develops from immature nerve cells—was approved by the U.S. Food and Drug Administration.

“Immunotherapy is very exciting, but it is not perfect yet,” says Robert Seeger, MD, director of the Cancer Research Program, Saban Research Institute, Children’s Hospital Los Angeles. “None of this is a 100-percent cure. There are all kinds of escape mechanisms; cancer is pretty sharp. Nevertheless, immunotherapy is now one of the components of treatment for some cancers.”

Researchers have taken a further step that happens to resurrect an approach that had been ignored for some 60-plus years: bacteriolytic therapy. The use of bacteria to destroy a tumor often triggers an immune response that in turn decimates any related tumors elsewhere in the body, largely by exploiting a tumor’s weakness. Solid tumors grow quickly and need a steady blood supply that provides both oxygen and nutrients for their cells to survive and thrive. But it is not uncommon to find that when a tumor grows large enough, the associated blood supply is unable to keep up developmentally, resulting in hypoxia, or very low oxygen, at the tumor’s core. In some tumors, those core cells will die without oxygen and nutrients, and this results in necrotic areas that are usually surrounded by hypoxic pockets where the cells are alive but no longer growing. Chemotherapy and radiation have little effect in this situation because the former needs blood to carry it into the tumor cells and the latter requires oxygen.

Bacteriolytic therapy was first successfully explored in 1891 by William Coley, MD, who injected streptococcal organisms into a patient with inoperable cancer, whose tumor shrank in response. Despite repeated success with bacterial products that came to be known as Coley’s toxins, Dr. Coley’s results were met with some skepticism. The practice went fully out of favor in the mid-20th century with the increased widespread use of radiation and chemotherapy, but was revived in the late 1990s by a team of researchers led by Bert Vogelstein, MD, professor of oncology and pathology and director of the Ludwig Center at Johns Hopkins. By screening a panel of more than 20 anaerobic bacteria—those that thrive where oxygen levels are low—Dr. Vogelstein’s team discovered that one, Clostridium novyi, worked particularly well in attacking tumors in mice. Unfortunately, it was also lethally toxic. So they re-engineered it, selecting a strain that lacked the gene encoding the lethal toxin, and named it C. novyi-NT (non-toxigenic). It is an obligate anaerobe, which means it flourishes where there is almost no oxygen and will grow in tumors from the inside out, killing both the surrounding dormant and actively multiplying tumor cells alike. Once it hits oxygen, the bacterium dies.

“Anaerobic bacteriolytic therapy such as C. novyi-NT is particularly well suited as a cancer therapy since most cancers have central cores of low oxygen where these bacteria can grow and destroy tumors. In contrast, other areas of the body without cancer are normally well oxygenated, so the bacteria do not germinate and thrive there,” says Saurabh Saha, MD, PhD, chief scientific officer of Exciton Pharmaceuticals and entrepreneur-in-residence at BioMed Valley Discoveries, which licensed C. novyi-NT from Johns Hopkins for use in clinical trials. “It turns out bacteria are quite good at breaking open tumor cells and releasing tumor-specific proteins that the immune system recognizes in a very potent way,” he adds. “It really revs up the immune cells. Once they recognize those antigens that the bacteria released when they killed the tumor cells, the immune cells can go around the body and find other tumor cells where those antigens might be present and destroy them.”

Bacterial spores—a dormant form of bacteria and the most benign—can be injected intravenously like chemotherapeutic agents or injected directly into a tumor to ensure they reach its low-oxygen areas. Although Dr. Saha says researchers have not yet seen a systemic response like Dr. Coley did after patients with multiple tumors throughout their bodies were injected with Streptococcus pyogenes, they did have success in trials using pet dogs and in one 53-year-old patient with leiomyosarcoma, a cancer of the smooth muscle tissue. The patient had a tumor in her shoulder and upper arm that was injected with C. novyi-NT and responded positively to it; in contrast, the tumors in her liver, lungs, and peritoneum that were not injected with C. novyi-NT progressed, eventually causing her death. Going forward, Dr. Saha says the right combination of bacteriolytic therapy and immunotherapeutic approaches will result in both local eradication of the tumor and distant eradication of metastatic disease. Engaging the immune system will allow for greater efficiency in destroying the cancer.

According to Shibin Zhou, MD, PhD, director of experimental therapeutics at the Ludwig Center at Johns Hopkins, it is possible to control the number of bacterial spores that enter the tumor with intra-tumor injections, whereas with intravenous injections it is difficult to know how many actually reach the site. On the other hand, not all tumors are easily accessed, especially those located in internal organs, and intravenous injection might be the most promising way to get to them. Eventually, he says, the type of tumor would be a major factor in determining which delivery route to choose for a particular patient.

Besides using bacteriolytic therapy as a form of immunotherapy, “the advantage of using bacteria is that these are live biological agents and you can engineer them to make them better,” Dr. Zhou says. “Right now, the C. novyi-NT we are using has one level of engineering done, which is to delete the lethal toxicity.” He adds that the same is true of using viruses including various forms of the herpes simplex virus and the adenovirus, which cause cold sores and the common cold, respectively.

Like bacteria, viruses are enjoying a comeback as potential oncolytic agents, having first been examined for their efficacy against cancer in the 1950s. “There is a unique synergy that one sees with oncolytic viruses and bacteriolytic therapy,” says BioMed Valley’s Dr. Saha. “These natural microbes—pathogens—are able to destroy cancer cells in a way that presents tumor antigens to the immune system in a very stimulating way. The immune cells can then destroy the cancers much more efficiently than even bacteria and viruses can alone.” All of which may allow physicians to one day fight a powerful adversary with a host of former assailants. Today, Angela Dispenzieri, MD, a Mayo Clinic hematologist, is part of a trial testing a weaker derivative of the measles vaccine strain. She and her colleagues—including Mayo hematologist Stephen Russell, MD, PhD, the therapy’s co-developer (along with Mayo oncologist Kah-Whye Peng, PhD)—have been treating patients with MV-NIS, working their way up from homeopathic levels to administering doses about 100 million times more potent than a standard vaccine.

The measles virus allows for a two-pronged approach: In the direct kill, it causes the cancer cells to fuse with their neighbors to become oversized cells that then explode. It also has a potential immunotherapeutic component, where infecting the cancer cells makes residual cells “more tasty to the immune system,” says Dr. Dispenzieri. But the challenge is that most Americans have either had the measles or were immunized against it, and therefore have at least some immunity. To work around that, the trial was opened to patients with multiple myeloma, a cancer of the bone marrow cells. It affects 20,000 new patients and is responsible for 12,000 deaths annually and is considered incurable. Because it is in the bone marrow, it is not localized and cannot be excised or irradiated; patients tend to have low levels of antibodies and are largely immunosuppressed, making them prime candidates for virotherapy.

Although measles is a disease clinicians are well versed in controlling, there were some concerns going in. “When we started the trial we had two theoretical nightmare scenarios,” says Dr. Dispenzieri. “The first was that you give it to patients and the virus hurts them and you can’t contain that, and the second was the immune system would eat up the virus so fast that it would do absolutely nothing.” Although the initial side effects included fever and chills, the virus did not cause any permanent harm to patients. And in at least one case, the immune system did not reach the virus first. Stacy—who now serves as an advocate for virotherapy, says Dr. Dispenzieri—had been through two bone marrow transplants and virtually all known myeloma drugs with no long-term benefit, a fact that was impossible to ignore since prior to treatment with MV-NIS her myeloma relapse manifested in part as visible tumors on her forehead. But the tumors shrank soon after the intravenous administration of MV-NIS; virotherapy calls for just one dose, since the immune system’s response means the virus would lose its efficacy on subsequent administrations. Nine months later Stacy had a recurrence of the growths, but they responded to radiation therapy. Dr. Dispenzieri notes that the relapse was local and did not recur in the bone marrow, adding that Stacy has been in remission for more than a year since. Dr. Russell and his colleagues are now testing the response to MV-NIS in liver tumors, ovarian cancers, and brain tumors.

As with bacteriotherapy, virotherapy patients tend to have exhausted all other options, which means the cancer is so advanced there is not much of an immune system left to stimulate. Given that, Dr. Dispenzieri says they have revised their study protocol and will offer the treatment to patients who are not so sick. “Hopefully as we reopen the trial and treat patients who are not quite so beaten up, we will see more patients derive benefit,” she says. “We want more Stacys.” At that point they will look to combination therapies, which appear to be the best approach for the most thorough eradication of cancer.