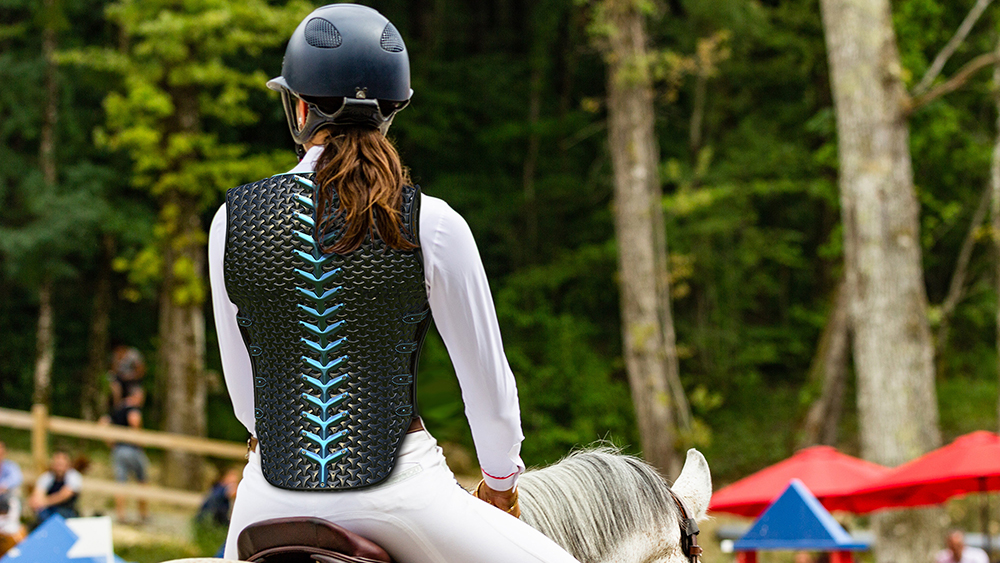 When Esmeralda Tuomi was 16 years old, her mom saved her life—and, unwittingly, primed her for a start-up she would launch at age 30. Esmeralda had been riding horses since she was five years old, her skills finessed enough to lead her to a showjumping career at the top level. Back then, Tuomi was in her last year with ponies before moving to compete alongside adults when her mount stumbled, tripping over the fence, and landing with his entire weight on top of her. “My coach thought I was a goner,” she says now. Thankfully, Esmeralda not only survived but also had no lasting injuries. It was due to one piece of kit: her body protector, which prevented hyperextension of her spine and any consequent crushing. “My mum is overprotective, and she said ‘If you don’t wear it, you’re not getting on that horse.’” To save others, as her mom saved her, Tuomi has just launched Armaros, a bespoke body protector that she hopes will become the industry’s standard as showjumping’s safeguarding answer to a Savile Row suit.

Tuomi knows firsthand why it’s so vital to wear such a garment, but many seasoned riders shun the protective device. She notes that in the UK, where the Finnish-British entrepreneur lives full-time, only a minority of riders wear one. In 2019, per Esmeralda, there were 112,000 horse-riding accidents: Just 22 percent of those involved wore a body protector, yet 73 percent of the incidents required hospitalization.

There are multiple reasons why riders aren’t embracing body protectors. A dorky stigma, for one, with proud riders keen to suggest they’re too deft to need such backup. The most common protectors, per Tuomi, either use styrofoam-style pads like armor plating or an airbag vest initially intended for motorbikers. Neither is well-suited to the horse circuit as they’re hard to wear and ill-fitting: Such bulkiness is a problem for sleek, image-obsessed showjumpers, and the one-size-fits-all approach restricts movement and horsemanship. The noisiness of the air bag could also exacerbate problems if it unsettled an already skittish mount.

With those challenges in mind, Tuomi decided to combine her off-duty passion with her profession. She’s a trained pattern cutter, who’s worked for the likes of Peter Pilotto, and so she took a full-time course in innovation design, aiming to finesse this essential, but unloved, kit. After several prototypes, she settled on the final product which she dubbed Armaros.

Tuomi’s innovations to the protector are multiple. First, she reimagined how it was designed, starting first with the fabric rather than the garment itself. “You have to have a material that performs in a way that allows the body protector to protect you, but also gives freedom to move and flexibility, and is thin enough to wear under a show jacket.” Her solution was to combine three different materials, which combine flexibility and impact-resistance together. (She declines to share exact details citing competitive advantage.) Fabrication isn’t Armaros’s only unique feature. Tuomi also used her pattern-cutting know-how to develop an adjustable design that can be tweaked for key measurements. “I have a short back and a large bust, which makes it pretty impossible for me to buy a standard body protector—I wear a children’s XL,” she explains, “But Armaros is basically a custom-sized product, where you can adjust the measurements like the bust, underbust, waist and length at front and back.”

Tuomi tells Robb Report she has already recruited Poden Farms’ Emily Moffitt to champion her design, and is about to seed more prototypes among pro showjumpers. She believes that it’s vital for buyers to experience Armaros firsthand, as the custom fit is key to its appeal. So she will start by selling it at horse trials and showjumping events with a standard at the pop-up shopping villages which accompany them. Safety, of course, is priceless, but Armaros won’t be cheap: Tuomi expects it to retail for around £500 (around $680), twice what most foam vests cost, and more than many air-bag designs. And her mom will, yet again, prove vital: She’s the CEO of a start-up-fostering company just outside Helsinki. “She has her own career, but I’d call her an informal adviser.”