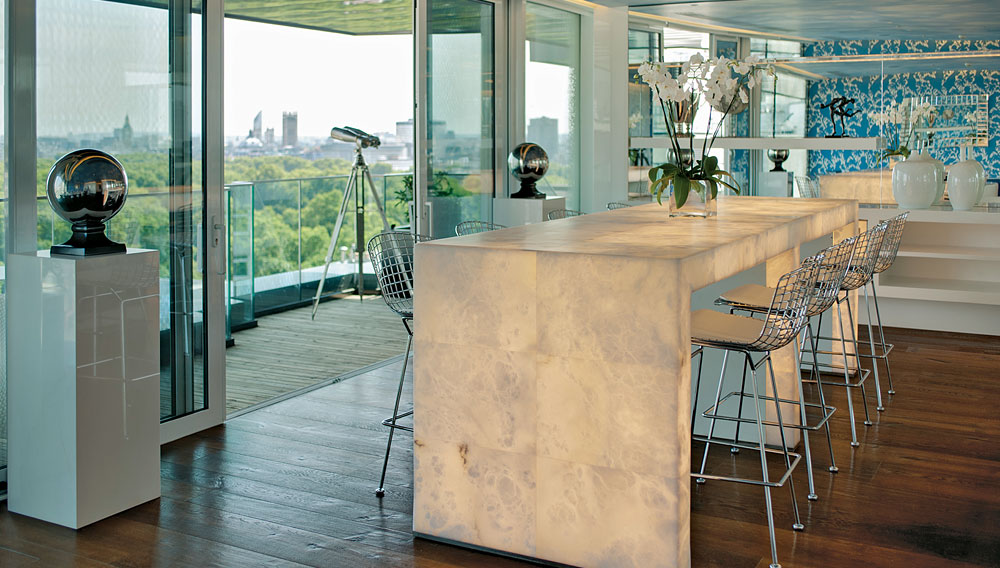 Space is at a premium in London, relegating many establishments, spas included, to the dark and dank confines of the city’s basements. Not so at the Four Seasons Hotel London at Park Lane, which reopened last year following a two-year, $200 million renovation. Set in a steel-and-glass aerie that architect Eric Parry describes as looking like “a hat with an overhanging brim,” the hotel’s penthouse-level spa opened in March 2011 with inspiring 360-degree vistas of London from its privileged 10th-floor perch on a leafy corner across from Hyde Park.

Hyde Park, Green Park, Big Ben, and the London Eye are all visible from the wraparound overlook, which includes nine treatment rooms with floor-to-ceiling windows. Treatments by Britain’s own Espa, the Organic Pharmacy, and Vaishlay, as well as Omorovicza from Budapest, fill out the extensive spa menu. The Organic Pharmacy’s Hyde Park Awakening—a $280, 120-minute multicourse treatment by pharmacist and homeopath Margo Marrone—begins with a neroli oil, lemon, and bergamot aromatherapy foot soak followed by a surprisingly nonabrasive calendula body scrub, a rain shower, and a back, neck, and shoulder massage with hot stones.

Privacy-seeking couples can book the spa’s Sky Suite, with its two-person steam shower, separate dressing room, and dedicated relaxation area. Treatments included, the space rents for a minimum of two hours for $1,200, and is available for a full 12-hour day for $9,600.

Every treatment at the Four Seasons comes with access to the spa’s relaxation pods—dark, curtained-off spaces that resemble seats in a first-class airplane cabin. Visitors recline in the ergonomic, electronically adjustable lounge chairs while listening to soothing music on Bose headphones.

Following a treatment, spa-goers can head to the outdoor patio at the spa café, which includes a binocular telescope for enjoying the city views. Guests linger for fresh and healthy dishes such as ahi tuna salad with pickled ginger; prawns with pineapple, lemongrass, and Thai basil; and potato-and-leek vichyssoise velouté. The patio has become popular with prominent London businesspeople, who, perhaps in need of some sun, patronize the café rather than the hotel’s Amaranto Bar downstairs.