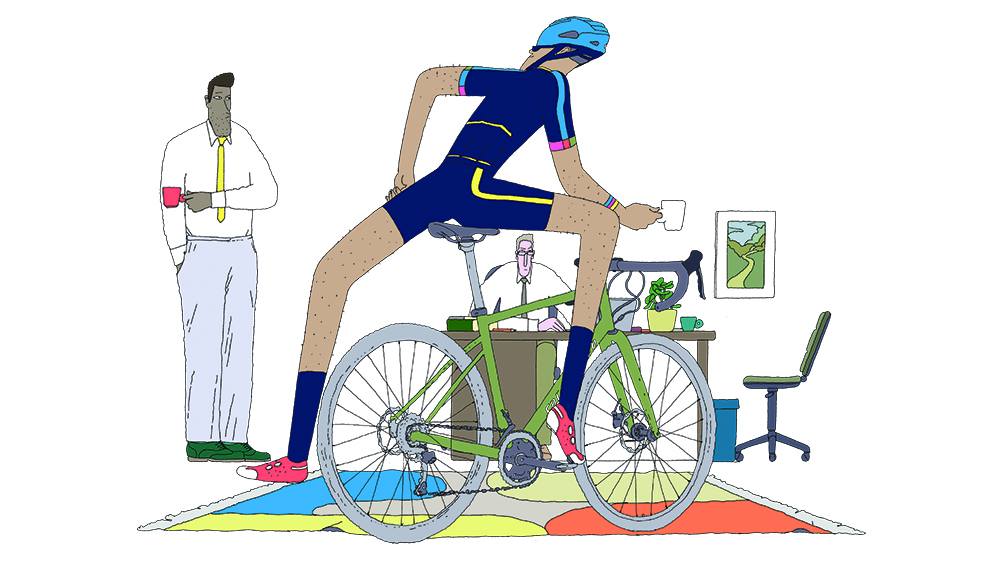 We’ve become very accustomed to seeing them on the road. You know, the “riders.”

Wannabe Miguel Induráins (sorry, Lance—you blew it) wedged into heaving uniforms of fluorescent Grand Tour–branded Lycra, their, ahem, masculinity tokens protruding with all the elegance of a vacuum-packed pallet of bananas.

But even so, there’s something about cycling that remains a bit, well, off. And it’s in the gear. Not just in those silly shoes, surely the world’s most dangerous footwear. Not even ski boots have the power to morph a person into a fleshy-carbon-fiber hybrid like cycling shoes. No, it’s in the way cycling gear is transcending its original purpose—that is, to be used by bicyclists for bicycling.

Since when did it become acceptable to traipse into the office or a café still clad in cycling gear, helmet half-cocked, sweat-slick forming behind you, bananas bunching? At this point, where is everyone else supposed to look? If the environment thanks you, the rest of us are peeling away in embarrassment.

The old maxim was “never let them see you sweat.” But somehow, the cycling uniform, despite its many foibles, is within a real shout of becoming the C-suite casual go-to.

We’ve seen this before—last time, it was golf. At some point, probably in the ’90s, the bland beige-chinos-and-stripy-polo-shirt look migrated from the spike bar to the office, so that men could pack beepers on one side of a belt and rangefinders on the other, making the transition from corridors to fairways of power almost entirely seamless.

How long before time-poor business leaders, in the never-ending quest for greater efficiencies, conclude: What’s the point in changing out of Ralph Lauren into Rapha and back again when you can simply flex the spandex all day?

The pandemic didn’t help. And not just because of WFH and the casualization of work attire. Sales of bikes climbed spectacularly during lockdowns, spurred in part by our boredom and need to get out of the house, and in part because we had nothing else to spend our money on. Wait lists reached into months and then years as China, the world’s largest producer of bikes, struggled to meet demand. A study by PeopleForBikes calculated that 30 percent of Americans got on two wheels during Covid-19, a full third of them new riders.

And now, high on energy shakes, executives are taking to the asphalt in droves. And not just by riding to work
or heading out for a Peloton parley. Events such as the Haute Route Pyrénées or Hotchillee’s “professional events for amateurs” have become muster points for HNWs looking to ideate, smash out deals and stave off the al-desko heart attack.

So far, I’ve avoided not just the cardiac arrest but also the over-the-handlebars business meeting. Not long ago, I was invited by a CEO to interview him on a ride. Just the two of us—I assumed—in plastic hats and thigh-gripping shorts, breathlessly discussing EBITDA and nipple chafing while I wonder where the boss of a company turning over hundreds of millions of dollars could possibly find the time to get so damned fit. I took the Zoom call option.

This isn’t about the sport, you understand. Despite my misgivings about stretchy shorts in the boardroom, I recently discovered a love for cycling. Not long ago I found myself on that snaking new-bike waitlist, not quite as torturous as counting down the years until your new Daytona arrives, but lengthy nonetheless. Eventually, my number came up. My military-green Specialized Diverge E5 is a thing of beauty and has become one of my most treasured possessions.

Save the mental image, though. I’ve not signed up in full. I don’t intend to become another MAMIL (you know, middle-aged man in Lycra), and I have no intention of putting my life in jeopardy by wearing a pair of the death-trap shoes.

But I have discovered how productive it can be to ride with others. On a glorious day earlier this year, my university roommate and I took an early-morning ride. We reminisced about the events of more than 20 years ago, stopped for a sandwich and a coffee and got out of breath. As we flew along a rail track turned cycle path, with the rising sun breaking through the trees, he asked me if I’d be godfather to his baby daughter. Done deal.

Robin Swithinbank is a frequent contributor to The New York Times, The Financial Times and GQ. He writes from the UK.