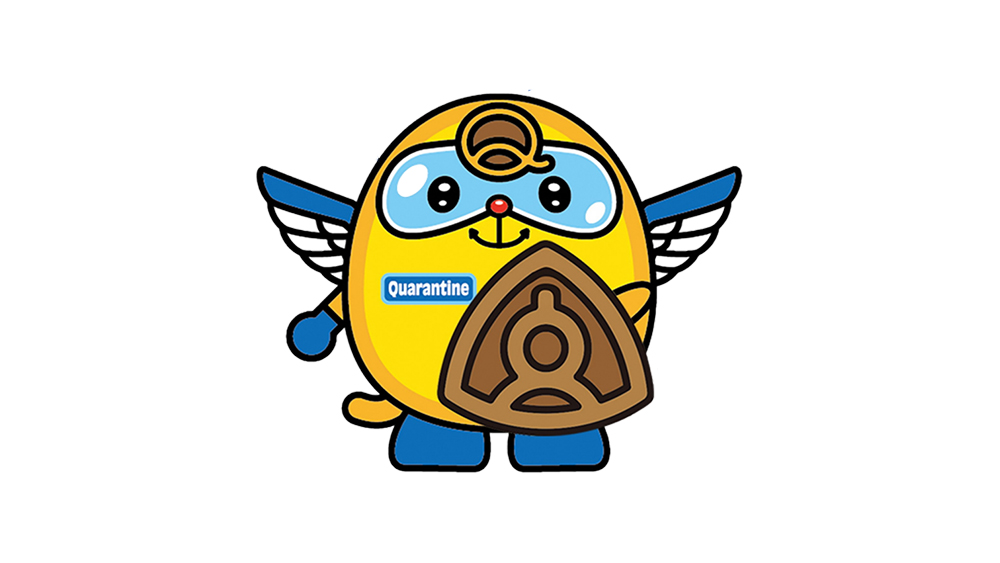 Japan always does things a little differently, and its handling of the coronavirus crisis has been no exception. On the one hand, some responses have appeared a little dubious, such as the approach to testing, best described as “don’t ask don’t tell”, and the exclusion of the children of medical workers from daycare centers, many of which remain open, ironically to ensure essential service providers can go to work. A national state of emergency was declared last month and has been extended to the end of May, but compliance with its guidance is entirely voluntary, and many restaurants and offices remain open.

On the other hand, many of the idiosyncrasies of Japan’s Covid-19 response have been delightful. The country’s enduring obsession with mascot characters (check out some of the weirdest here, here and here)—a fixation which is so culturally ingrained that mascots even get to meet the Emperor—has spawned several new creatures.

The official quarantine mascot, Quaran, seen above, may be a little prosaic, but the same cannot be said for Amabié, a three-legged, beaked sea monster who, as legend has it, appeared to a government official in 1846, prophesied an epidemic, and told the man to draw her picture and show it as many people as possible to ward off the disease. The myth has been enthusiastically adopted by Japanese Twitter users, who have shared their own interpretations of Amabié as a protective talisman against the virus.

Furloughed ninjas from a museum in central Japan also got creative last week, delivering supportive messages to local children in the form of “ancient” scrolls. The scrolls tell the children they can defeat coronavirus with renowned ninja powers such as handwashing. Ninja badges are also available for people with springtime allergies who want to reassure fellow citizens that their sneezes are not due to Covid-19.

Johnny Waldman is a Brooklyn-based artist and writer who collects the finest examples of creative Japanese whimsy on his blog, Spoon & Tamago. If you ever want to see what it looks like to create a rock garden out of toast, a bicycle out of wood or a dress from elastic bands, this is the blog for you. Waldman has been compiling creative Japanese solutions to pandemic problems, such as a 1918 government social distancing manual dating from the Spanish flu pandemic; the masked subway-riders show how little has changed.

Studio Ghibli offers its film stills as Zoom backgrounds, including (clockwise from top left), ‘Spirited Away’, ‘The Cat Returns’, ‘My Neighbor Totoro’ and ‘Princess Mononoke’.

Other examples include tiny fish-shaped soy sauce bottles repurposed as hand sanitizer containers, Zoom backgrounds by Studio Ghibli (the famous animation studio behind My Neighbor Totoro and Spirited Away) and an AI social distancing app that tells you exactly how far away to stand from other people. A series of beautifully designed tongue-in-cheek etiquette posters proclaiming “Let’s stay one tuna apart,” is typical of Japanese design, says Waldman.

“The posters rely on a familiarity with manga and mascots in order to be easily accepted,” Waldman said. “It’s a technique often employed by public service announcements, like the Tokyo Manners posters”, referring to a series of comic subway etiquette notices.

In comparison, the artistic response in America has been darker and more gritty, perhaps due to the extreme impact of the virus in the US, where two-thirds of artists are now unemployed. It has found its most authentic expression in street art, such as the mural work of Darion Fleming in Charlotte, NC, Sean Yoyo in Miami and Hijack Art in Los Angeles.

Graffiti art is relatively rare in Japan, where modest yet ingenious graphic design and animation rule. “Japanese art and design have always been low-key, with an emphasis on charm and clarity,” said Waldman. “I would say a lot of it stems from a culture that values subtlety, thoughtfulness and refinement over boldness and standing out.”

There are other reasons why Japan’s creative response has remained playfully imaginative as opposed to raw and nihilistic. Culturally and spiritually, Japanese society tends towards a fatalistic acceptance—even celebration—of the brevity of life, as can be seen in its worship of short-lived cherry blossoms. And the frequency of extreme disasters in Japan means that its people have developed a culture of endurance and community spirit that protects them.

Social distancing, an aberration in America, is also highly Japanese. Polite queuing, avoiding personal contact, mask-wearing and accepting individual restrictions for the greater good of society are everyday features of life, and celebrated in its art.