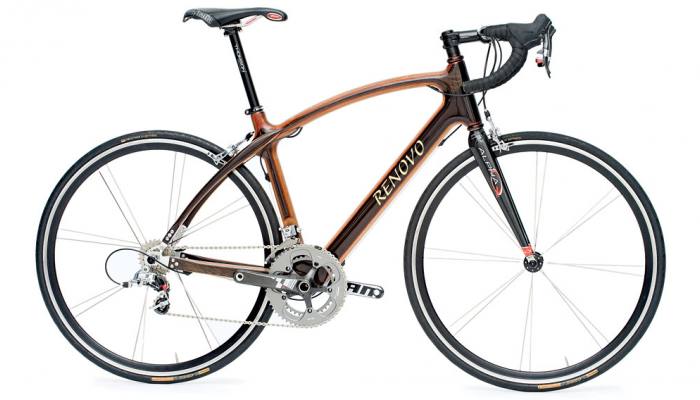 The story behind Renovo’s (www.renovobikes.com) wooden-framed road and mountain bikes is one of careful calculation and good fortune. Twenty years ago, the company’s founder, Ken Wheeler, conceived the idea for a wooden bicycle, but his design efforts at the time were devoted to building an all-wooden airplane. Many years later, after he had purchased a CNC router for a project that never materialized, Wheeler leaned his bike against the machine and—just as if he were conceiving the idea all over again—he remembered his earlier plans for a wooden bike. That was how his company started. The process to successfully build a smooth-riding, durable bike out of wood, however, proved to be more challenging.

It began with the purchase of aluminum tubing used in most traditional mountain bikes. Wheeler figured that if he could match the weight and performance capabilities of the aluminum tube with a wooden one, there was nothing preventing him from successfully building an entire bike out of wood. Wheeler admits that his first complete bicycle was terrible, only because he did not use the domestic or exotic hardwoods that he planned to once his designs and engineering proved viable. When Wheeler officially introduced his bike in early 2008, the aesthetics were eye-catching and unique. These days, other manufacturers are producing similar designs, but Wheeler’s bikes remain ahead of the pack in their performance. “Ride quality, it seems, has been forgotten in the rush to build the lightest possible bike,” Wheeler says, criticizing the industry. “Lightweight is good, but then there’s the point of diminishing returns because as you make it lighter and lighter, the frame becomes thinner and thinner and less and less durable. Our goal has been to build bikes that don’t break, so they’re overbuilt. Ours are going to be a little heavier, but they’re also going to be more durable.”

Renovo’s most popular model, the R4—aka the Pursuit (shown here, from $5,100)—also is the company’s smoothest-riding, thanks to a curved top tube and curved seat stays. Like all Renovo bikes, the R4 offers customers the ability to customize its appearance by choosing to combine as many as four hardwoods. Exotic options include wenge, bubinga, and sapele (among others), while domestic Appalachian hardwood choices include hickory, maple, walnut, and ash. “I hate to send some of these frames out to customers,” Wheeler jokes. “They’re so gorgeous we’d like to keep them.” He adds that it’s not uncommon for customers to spend months deliberating over wood combinations, but there’s really no risk involved. “It’s pretty hard to make a mistake,” he says. “They all look good.”

Once customers have chosen their desired woods and Wheeler has collected pertinent information about them—their height, weight, riding style, and so on—he can select the boards that have been tested to meet those specific tolerances. The system assures each customer the smoothest-riding bike that also is tailored to their needs. Though Wheeler is content with the fitting system he currently has in place, he’s always looking for ways to refine it. After all, as he says, “Our reputation is built on good bikes that work.”