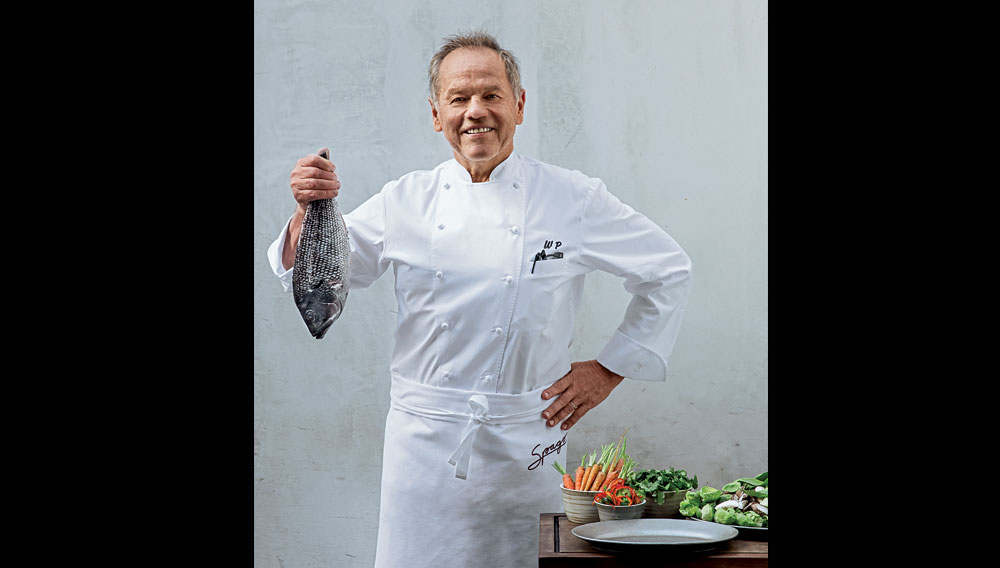 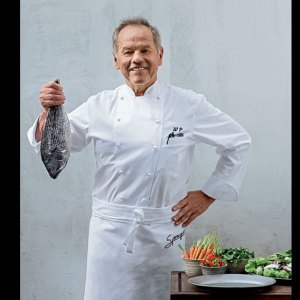 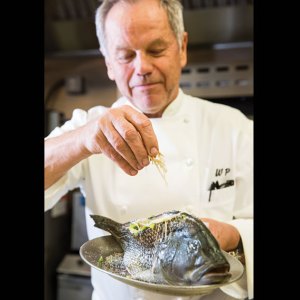 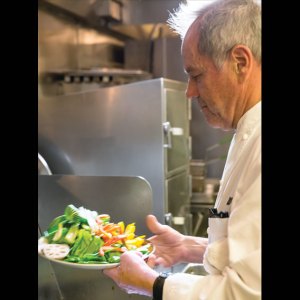 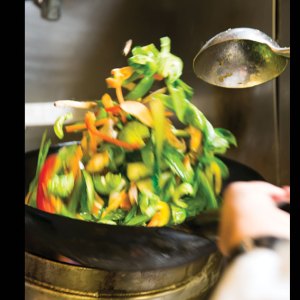 Chef Wolfgang Puck expertly fillets a plump black bass and rubs it with a fragrant blend of ginger, garlic, and green onion. He then tops it with slivers of jalapeño peppers and shredded ginger that releases a heady aroma before the fish even hits a pan.

He commands the kitchen at Spago, his Beverly Hills flagship restaurant, demonstrating how to make a dish from his latest book, Wolfgang Puck Makes It Healthy: Light, Delicious Recipes and Easy Exercises for a Better Life (Grand Central Life & Style). He puts the fish into a steamer, cranks up the heat on the wok, and begins to make a simple sauce with a base of peanut oil and soy sauce. Back at the wok, he tosses in halved baby bok choy, sliced red and green bell peppers, shiitake mushrooms, baby carrots, and Brussels sprouts, cooking them until they are just wilted but still bright in color. He removes the fish from the steamer and reserves some liquid for the sauce, and after a careful drizzle over the tender bass, his dish showcases the medley of colorful vegetables and brown rice.

In less than 15 minutes—and with only 379 calories (73 calories from fat) and more than 14 grams of lean protein per 4-ounce serving—Puck has created a meal that would please any nutritionist or cardiologist. Not that the Austrian-born, Michelin-rated chef needs to prove himself to anyone. He wrote the new book, he says, “Because I feel so positive about the changes I’ve made that I want to inspire others. I want to help people get in shape, because believe me, if I can do it, they can do it.”

Calorie-counting and exercise routines stray far from the usual fare celebrity chefs serve up, and to date, few have explored the healthy lifestyle category as deeply and with such zeal. (In fact, Puck says his publisher offered to pay him more if he opted for a more typical book of recipes.) But he is a known innovator credited—along with Chez Panisse’s Alice Waters—as a creator of California cuisine in the 1970s. He pushed the California influence further with Asian-fusion cuisine when he began utilizing ingredients and dishes from the West Coast’s Asian immigrant population. But even he admits that he never thought he would author a book like this. “If you had suggested to me 10 years ago, or even five, that my next book would focus on healthy recipes and fitness, I would have said you didn’t know me very well,” he says.

But Puck will also tell you things change. His trajectory toward a more health-conscious lifestyle started in 2009 at age 59. Hip-replacement surgery and the realization that he could no longer ski or play tennis with alacrity for an extended period hit him hard. “I was motivated by ego—and by my children and my family,” he explains. Not to mention the demands of his work schedule; running his dynamic culinary-arts empire keeps Puck on the road 160 days a year and requires a level of energy that would be taxing at any age. But this is a man who likes to play, too: drinking Krug with friends while dining at his restaurant at the Hotel Bel-Air and skiing in Beaver Creek, Colo., (where he has a Spago at the Ritz-Carlton), with Austrian cohorts and former Olympic skiers Franz Weber and Franz Klammer. “I said, if I don’t make some changes, by the time I’m 60, I will have to give up the things I love, because after 10 minutes I am so exhausted that I have to sit down.”

Enter Chad Waterbury, a physiologist and personal trainer who also happens to be a foodie. Over the years, Waterbury, a regular at Puck’s Asian-inspired Chinois in Santa Monica, Calif., struck up a friendship with the chef while dining on Shanghai lobster and grilled Szechuan beef and drinking top-cellar red wine. When Puck complained of shoulder pain and told him about his recent hip replacement, Waterbury offered to help. “He was definitely a reluctant student,” Waterbury recalls. “He was skeptical, and I don’t think he had high expectations, because every other trainer had failed him.”

Puck concurs. “I had tried so many things, like the one coach who had me work my legs so hard that I got nauseous and passed out. Then I could barely get out of bed the next day.” Clearly, such experiences were not a recipe for motivation, but Waterbury was different. Rather than prescribing a regimen he thought Puck should be able to do, he gave him a workout that met Puck’s fitness level. As Puck writes in the book: “He (Waterbury) shared a simple piece of wisdom that I had never heard before: You can’t start with an hour of training if your body is only ready for 15 minutes.”

And so began the training sessions in Puck’s living room. They started slowly, with 45 seconds of jumping rope and some squats, push-ups, and light boxing. As Waterbury gradually increased the intensity, Puck quickly saw his stamina and strength improve, which provided incentive to persevere. Today, nearly five years later, Puck, now 64, has kept off the 24 pounds he lost and can ski and play tennis as he likes. “Ultimately, though, I don’t cook, eat, and exercise this way for the weight loss, but because I feel better and have more energy than ever in my life,” he says. He and Waterbury still meet in Puck’s living room, but the repertoire has been extended to an hour. It includes weight training and advanced moves like one-handed push-ups, all incorporated into a full-body strength-training circuit that gives Puck the vitality he needs to sustain his busy schedule and keep his weight stable.

“To get more metabolic bang for your buck, it’s best to do full-body workouts,” explains Waterbury. “That way, you can exercise three or four times a week and work all the major muscle groups.” In the fitness section of the book, Waterbury shares these routines, complete with tips and variations for all levels, which he designed specifically for those over 50. “The goal is to keep people moving safely . . .give them more mobility, more range of motion, and less pain.”

Prior to embarking on this regimen with Waterbury, Puck did not exercise regularly. The good news is that recent research published in the British Journal of Sports Medicine indicates that starting exercise later in life is far from futile. In fact, the study concluded that consistent physical activity, even just one hour a week, is associated with successful aging and a reduced risk of chronic disease, memory loss, and physical disability.

Gregory P. Fontana, MD, chairman of the Department of Cardiothoracic Surgery at Lenox Hill Hospital in New York, adds, “There is no question that the initiation of exercise, even at advanced age if it is cleared by a physician, has benefits. And not just for cardiovascular health: It also helps improve energy, mental processing, and mitigation of osteoporosis and degenerative diseases. The exercises in this book, with their emphasis on core strength, flexibility, and aerobic activity, are an ideal combination.”

An avid home cook who knows Puck from the food and wine world, Fontana also gives the recipes a cardiovascular thumbs up. “He was very thoughtful in creating low-calorie dishes with a balanced ratio of good and bad fats,” he says. “And I can tell from reading these recipes, this is food that will taste good. The biggest challenge to eating a healthy diet is finding foods that sate your appetite and excite your palate.” A few recipes that piqued this doctor’s interest: broiled miso salmon with Spago cucumber salad, and arugula salad with tangerines, Asian pear, dried cranberries, and toasted almonds.

Of course, Puck, an early proponent of farm-to-table cuisine, is obviously not someone who would offer up the requisite weight-loss diet of bland grilled chicken breast and steamed broccoli. And while some celebrity-chef cookbooks with their esoteric ingredients and intimidating techniques are anathema to home cooks, these recipes are straightforward renditions of the kind of food he makes at home for his wife and two young sons. His guiding philosophy: Reduce animal protein to 4 to 6 ounces per meal, curtail bad fats, restrict sodium, and shift the focus to whole grains, legumes, and fresh seasonal vegetables.

There is the family-favorite side dish—a simple and colorful steamed vegetable platter made from the produce Puck chooses with his sons, Oliver and Alexander, at their local farmer’s market—and revamped classics like a Green Goddess dressing flavored with fresh herbs and avocado blended with nonfatGreek yogurt. There are also versions of dishes the chef makes for the Oscars Governors Ball, such as Thai steamed red snapper fillets with brown rice and Thai sauce, a favorite of best director Academy Award-winner Ang Lee. Another is called my mother’s garden vegetable soup,a rustic, comforting dish about which he writes, “Accompanied by some crusty bread, this is all the lunch I need.”

Fans of Puck’s restaurants will be pleased to see recipes for Spago’s seeded multigrain crispy flatbread and dessert soufflés that are surprisingly low-fat because of their egg-white base. There’s also a low-calorie rendition of the ever-popular Chinois chicken salad and a healthy interpretation of the Hotel Bel-Air’s classic tortilla soup, a favorite of Nancy Reagan. He also includes original dishes, like an easy brown rice mushroom risotto prepared in one of Puck’s most-recommended home cooking appliances—an electric pressure cooker—as well as an Indian curry (his singular curry spice recipe is included), turkey-mushroom burgers and, of course, pizza.

But the chef is quick to point out, “This is not the Puck diet.” He makes no promises or pronouncements. Instead, he aims to offer delicious alternatives because, he says, “Obviously, if the food doesn’t taste good, I won’t eat it.” He also admits to lapses in discipline. Cooking for the ambassador from the United Arab Emirates in Washington, DC, or scouting for new restaurants overseas exposes him often to culinary indulgence and temptation. So for him, the watchwords are moderation and portioncontrol.

“Having dinner with family and friends should be enjoyable, not about ‘don’t eat that’ or ‘don’t eat this,’” he says. When he and his wife, Gelila, dine, they share an entrée and choose lots of vegetable side dishes. He may take a bite or two of dessert and then send the plate back, or order sorbet or fruit to top off a meal. He never deprives himself of wine (“If we don’t have wine with dinner, something is missing,” he says), and soft drinks are verboten.

Feeling fit and strong is Puck’s best motivator. “And if the food is good, it’s not that hard,” he adds. Of course, he still has a passion for gourmet cuisine, but he says, “You can’t let your health go because of the passion you have. You have to take care of yourself, too, especially for your family.”