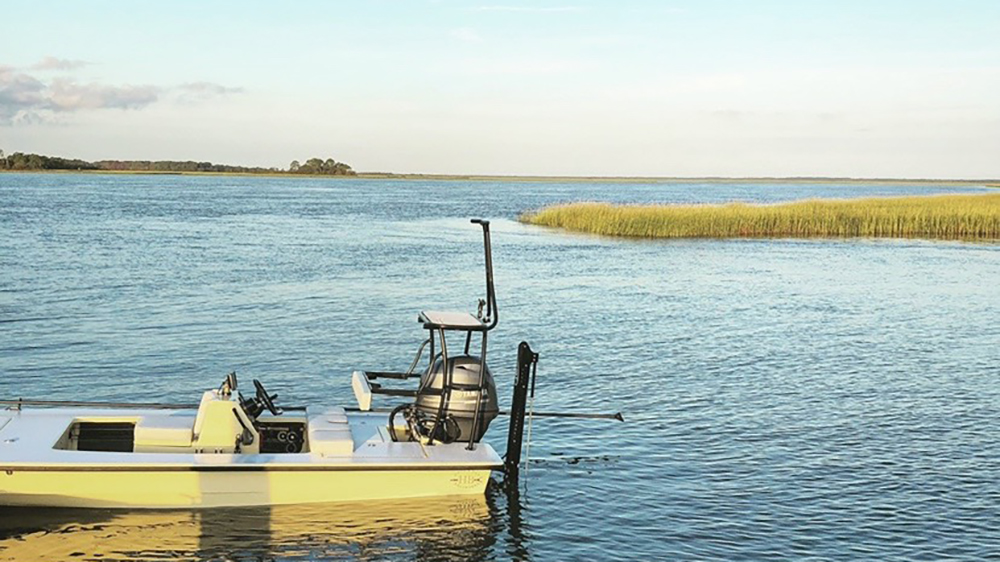 One of many pleasures of fly-fishing is the sense of tradition, of revisiting places that matter to you. But I’m making the case for change. Here’s to new fish and the sense of excitement that comes with them. It’s like watching a critically acclaimed TV series—you know you’re going to like it, but it takes some effort to just get started. But there’s room for The Leftovers just like there’s room for more fish.

I had heard of the charms of redfish, which is like a carp. Not a beautiful fish, but a strong and particular species, found in the Low Country outside Charleston—conveniently, a great city to visit. So I drove north of town in the dark and followed Google’s instructions until the lane narrowed and water lined both sides. Waiting at the end was a truck with Jeremy, my guide from Charleston Shallows.

We went out on his Hell’s Bay flats boat as the sun came up. He said, “When it comes to redfish, the window where you want to put the fly is very small.” So that’s how it is. No long casts in front of a cruising fish, but short, accurate ones in front of fish that keep changing directions. I was using a 9-foot, 8-weight rod, with a crab pattern. When the redfish eats a crab off the sand, its tail pops out of the water, so you scan for the gray, forked shape with a red spot the size of a silver dollar in its center. It took some practice, but I finally put a cast right in front of the nose of one and was rewarded with a muscular fish that flashes steel in the sun.

New fish in new places mean new traditions. The next day I drove to Beaufort, S.C., and went out with Captain Tuck Scott from Bay Street Outfitters. Early in the morning, we waited for the tide to come in; it was a pleasure to be on the water, amid the seagrass and the egrets, and ride past an island with wild horses grazing on the shore. This landscape was about water and light and salt, with horizons in every direction changing as the sun rose. I knew the drill better this time, but when Tuck said, “You can cast it even closer,” it was his diplomatic reminder that I had a lot to learn. Still, I was getting more confident, and that was important. Also important was discovering the quaint and dilapidated Shrimp Shack for a crispy but tender fried shrimp roll and a large iced tea on the way back to town. The hook was set; I knew I’d return.

A redfish before release.  David Coggins

Sometimes you need a little push to go after a different species, the same way you won’t go to a Wagner opera unless somebody gives you tickets (and possibly not even then). I had once heard about false albacore but didn’t pursue them until a friend insisted we go to Cape Cod when the albies made their fall migration. Ideally, they’re feeding on the surface and will aggressively take your fly. Then you’ll find out why these fish, essentially miniature tuna, built like torpedoes, are some of the strongest you’ll be connected to. When they go on a run, your reel will hum as they tear into the distance. At night you eat at the Impudent Oyster in Chatham; you can stay at the Chatham Bars Inn. Now it’s all making sense.

Incentive can arrive unexpectedly. Recently, I discovered that the father of a friend is a fly-fishing guide in Miami. How could she have kept such vital information from me? His name is Luis, and he runs the Fly Shop of Miami. We started a correspondence; I was curious about the bonefish activity near there.

Luis said the bonefish action was good. He added that the snook fishing was worthwhile, too. This tip gave me pause. Now I want to discover what the snook, a saltwater fish with a protruding jaw that resembles a pike, is all about. I just have to imagine it’s like a new show on HBO. Coming this spring … The Snook. I think I’ll write Luis and get his opinion on the best time to go out. And, of course, where to eat afterward.