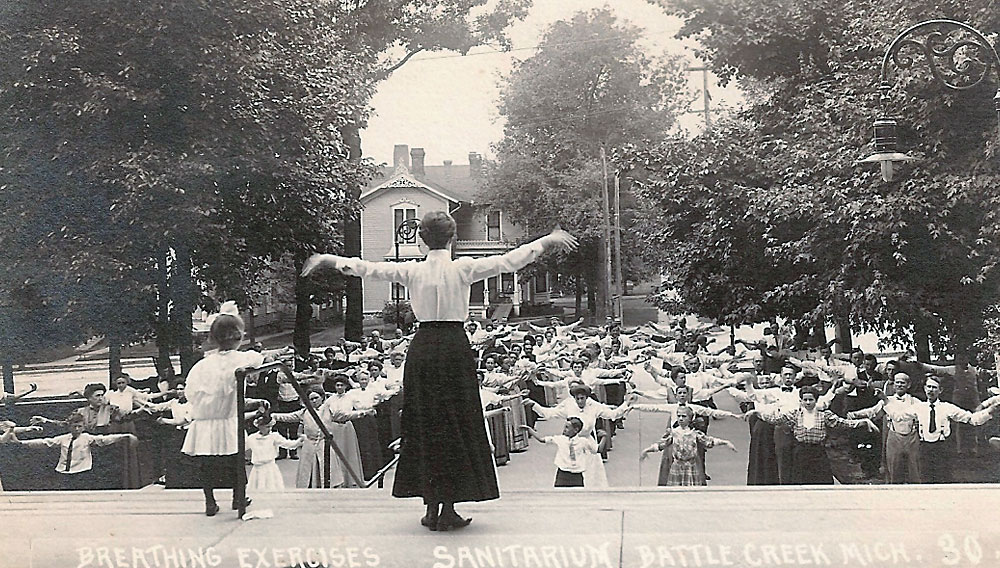 While the battle between the forces of universal health-care and free-market capitalism resumes in our nation’s capital, more enlightened minds cast back no farther than the late 19th and early 20th centuries to satisfy themselves that improved public health and increased private wealth can be simultaneously achieved: As the cereal barons of that robust age abundantly proved, the one need not necessarily deplete the other.

America’s two greatest fiber-rich fortunes trace their beginnings to the health facility established in Michigan by John Harvey Kellogg, a doctor who possessed some rather curious medical ideas. A far more rigorous retreat than those to be found in this month’s “Winter Wellness” feature (page 105), Battle Creek Sanitarium (shown) advocated Kellogg’s radical system of abstinence known as “biologic living.” A staunch vegetarian and celibate, the good doctor believed, for example, that carnal appetites could be curbed by avoiding carnivorous temptation. It is said that he spent his honeymoon writing a treatise on the dangers of sex. (He and his wife, Ella, kept separate bedrooms during their entire married life.) Coffee, tea, and alcohol he proscribed; in fact, the only liquid of which he wholly approved was water, and this he administered liberally to his patients—in oral and enema form. Yet his most lasting professional breakthrough occurred while he was searching for methods of more thoroughly cleansing the intestines of his charges: Experiments with whole grains accidentally yielded toasted wheat flakes, which—along with the rice and corn versions that followed—forever altered the American breakfast table.

Although this wholesome mishap earned Kellogg enormous sums, it did little to promote his personal well-being. Management disputes with his brother, Will Keith—who was a partner in the Sanitas Food Company (later the Kellogg Toasted Corn Flakes Company and now simply the Kellogg Company)—prompted the latter to buy up the stock that his older brother had issued to employees in lieu of higher pay; the younger Kellogg’s takeover sparked a lifelong feud between the two.

More galling still was the success of one of his patients: Charles William Post, a ne’er-do-well entrepreneur who, in 1890, checked into Kellogg’s sanitarium to recover from one of the nervous breakdowns that had become part of his established pattern. A one-time general-store owner and traveling salesman, Post styled himself an inventor, having registered under the auspices of his farming-equipment company patents for a seed planter, a hay stacker, and a sulky plow, as well as, among other novelties, a new type of suspenders. When the equipment business failed, Post suffered a mental and physical decline, after which he traveled to Texas to launch a real-estate-development venture. The lapse triggered by this dream’s demise landed him in Battle Creek, where Kellogg excelled in the treatment of illnesses having “nervous” rather than organic causes. The restless Post had a consuming fascination with any new idea that might present commercial opportunities, and his stay at “the San,” as inmates affectionately dubbed the retreat, inspired him to open his own clinic nearby. La Vita Inn pursued a Kellogg-like regime that included grain-based foods and Postum, a coffee substitute made of bran and molasses that Post aggressively marketed—along with his whole-grain cereal, Grape-Nuts—through newspapers and magazines in the country’s first national advertising campaign. (The Postum Cereal Company is credited with the first use of the clip-out coupon.) Post, according to some accounts, was less concerned with the quality of his products than with that of the advertising, which he authored himself. In 1909, his faux coffee alone netted an annual profit of nearly $1.5 million, and he had out-marketed the Kellogg brothers with his own take on breakfast flakes, Post Toasties, which the previous year had earned a very healthy $2.2 million. Dr. Kellogg claimed until his death in 1943 that Post had pilfered the formula from his office safe while recuperating at the San.

While one of Post’s many enterprises at last flourished, he himself did not. In 1914, diagnosed with acute appendicitis, he rushed by private train from his home in Santa Barbara, Calif., to the Mayo Clinic in Minnesota, where he underwent surgery. Although he survived this ordeal, his bouts of depression persisted. In May of that year, back in California, the cereal king lay in bed with a rifle propped between his legs, the muzzle pointed toward his head, and pulled the trigger with his toe.