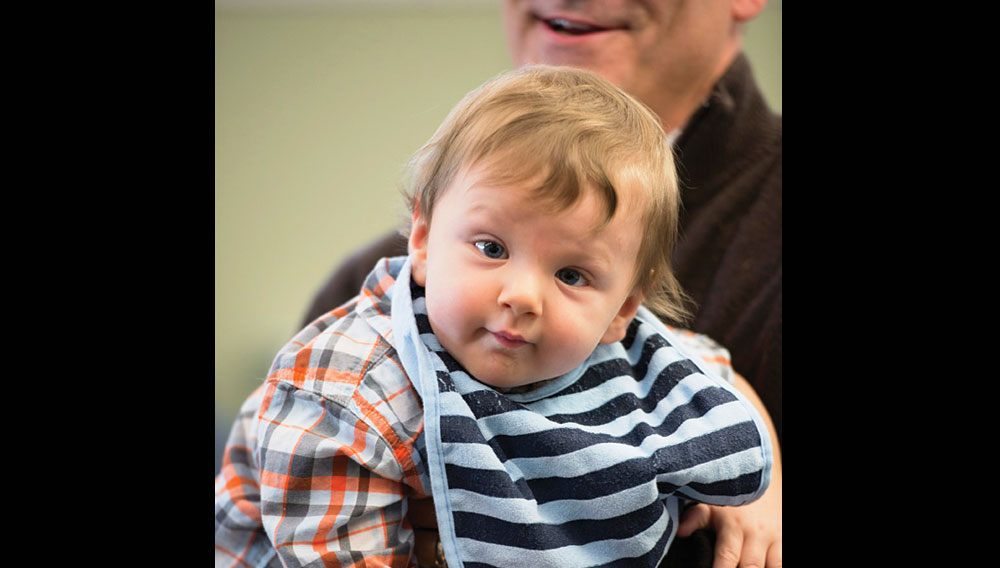 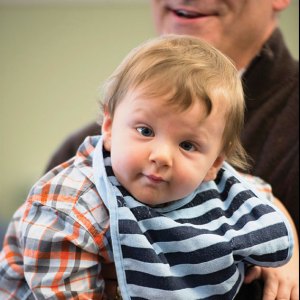 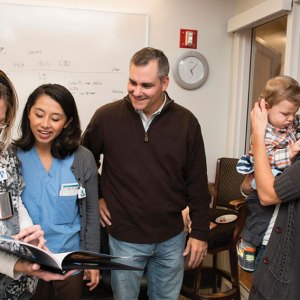 Watching Wyatt Joyner wiggle and bounce in his mom’s lap, it is difficult to imagine that the 9-month-old – now nearly the size of his 2-year-old sister – was once in the Newborn Intensive Care Unit (NICU) at the MassGeneral Hospital for Children (MGHfC).

“Being here brings back how real it was and how startlingly different the outcome could have been if we landed at a different airport or were brought to a different hospital. It is a reminder of how fragile life can be,” says Dawn Joyner, Wyatt’s mother.

On Oct. 30, the Joyner family returned to the MGHfC. It didn’t matter that it was a day that the city was anticipating a presidential visit and a World Series win was hanging in the balance – Joyner simply wanted to thank the people she credits with saving Wyatt’s life.

“He is a miracle,” she says. “They may see this as doing their job but it’s so much more.”

It all began in the early morning hours of Jan. 29. Joyner was rushed by ambulance from Logan Airport to the MGH Emergency Department. She was 32 weeks pregnant. Joyner and her family had been visiting her parents in Myrtle Beach, S.C. Her obstetrician had given the go-ahead to travel.

“When we boarded our flight, I was feeling fine,” says Joyner. “But about 20 minutes into the flight I began experiencing severe pain. Thirty minutes later, the pain was excruciating. I began to vomit and was in and out of consciousness. I told my husband that I would need medical attention as soon as we landed.”

From the MGH Emergency Department, Joyner was transferred to Labor and Delivery and continued to experience the same symptoms. Carrie Coleman, MD, of the Vincent Department of Obstetrics and Gynecology, observed only one heartbeat on the fetal monitor, says Joyner. “Dr. Coleman said that it was not the baby’s heartbeat. It was mine.”

Joyner’s uterus had spontaneously ruptured, and she was bleeding internally. Over the next several hours, the team worked tirelessly to stabilize her, and Coleman performed an emergency cesarean section.

“We read the reports. For two minutes Wyatt was unresponsive, not breathing, no heartbeat … they brought him back to life,” says Stephen Joyner, the baby’s father.

Nine months later, the NICU team who cared for Wyatt during his week at the MGHfC was thrilled to see him again. “I remember him little and sick; it’s amazing to see him healthy and active,” says Sarah Calderone, RN. “It just gives you a chill all over.”

Adds Karen Bravo Sosa, RN, “It’s not all the time we get to see what happens afterward. It’s hard to forget a story like this where everything seems to fall into place.”

The Joyner’s journey has come full circle. This week they traveled to Myrtle Beach again. This time with a healthy, bouncy baby boy in their laps – a boy who is thriving.