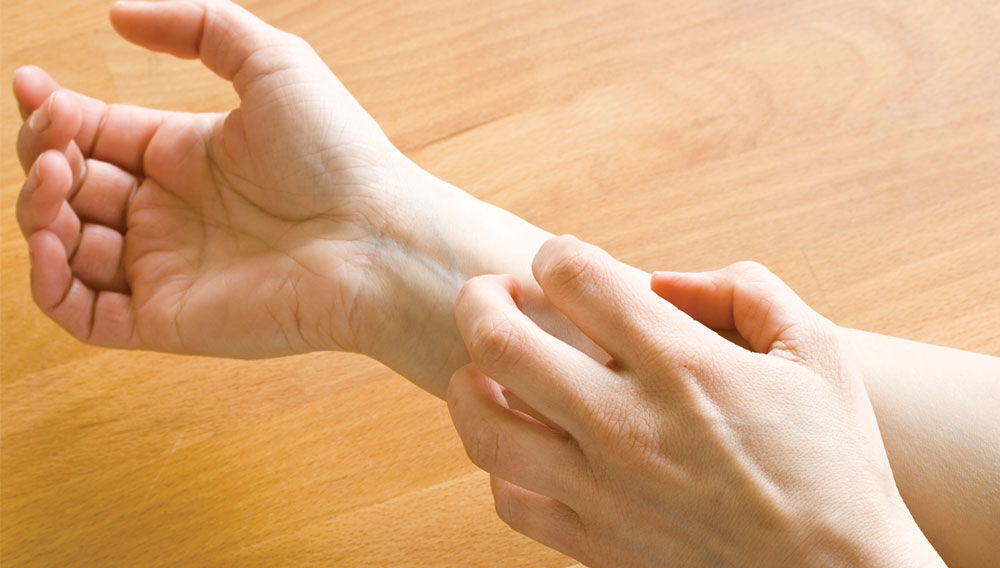 “You don’t know shingles if you’ve never had a personal experience,” says Halvor Iverson.  “This is not for the faint-hearted.”

During an episode of shingles (also known as herpes zoster) in April, the 63-year-old struggled with severe pain.  He had the typical shingles rash; redness, blisters and pain in the affected area, in his case his left arm, shoulder, neck and back.

At first Iverson figured it was just a normal rash that would go away on its own in a few days, but when his pain grew intense, he went to his primary care doctor and was diagnosed and treated for shingles.  He learned shingles is caused by the varicella zoster virus (VZV) which is the same virus that also causes chickenpox in younger people.  VZV stays in most people after their chickenpox heals and can reactivate many decades later to cause shingles.

According to the U.S. Centers for Disease Control and Prevention (CDC), there are about one million new cases of shingles each year in the U.S and almost one-third of the population gets shingles at some point during their lifetime.  However, some mild cases remain undiagnosed.  The most common location for shingles rashes is on one side of the torso, or the upper face, and the main symptoms are itchiness and pain in the affected area that evolves into blisters, ulcers and then scabs.  Some patients also notice fevers, headaches, chills or other general signs of illness.

“At its peak, my shingles pain was off the charts,” says Iverson.  “The skin along the path of my rash felt like there was a hot cast iron skillet on me.  My bones ached, and the pain would have been unendurable without medication.”  His doctors immediately prescribed antiviral and pain medications which helped treat and heal his rash and pain.

Iverson also checked in with Anne Louise Oaklander, MD, PhD, an associate professor of Neurology at Mass General Hospital.  Oaklander is an internationally recognized expert on shingles and post-herpetic neuralgia (PHN), a serious neurological complication in which pain lingers in an area of previous shingles long after the rash heals.  Oaklander suggested adding nortriptyline, an antidepressant most often used now to treat nerve (neuropathic) pain.  Nortriptyline can lessen the pain during shingles, but it also reduces the risk of PHN setting in.  Oaklander says as bad as shingles can be, the rash always heals.  But with PHN, the pain can last for months or years.

She cautions people not to take shingles lightly.  “There is a natural tendency to think shingles is minor like most rashes, but people can’t see the nerve damage below the skin,” she says.  “This nerve injury is the cause of PHN, a source of severe and disabling pain, particularly for older patients.”  She adds, “In some cases, the shingles virus can even invade into the brain or spinal cord to cause encephalitis, myelitis, or strokes.  We see these severe complications regularly in Neurology.”

Oaklander says the biggest risk factor for shingles and the biggest risk for PHN after shingles is age.  Studies show that 50 percent of shingles patients over age 70 will have PHN for at least a year.  “People retire and think they have their golden years ahead of them,” says Oaklander.  “Unfortunately, PHN can rob them of quality of life.”

2)  Seek medical evaluation the same day if you suspect you have shingles.  The pain or itch often develops before the rash appears.  Go to an emergency or urgent-care facility if your regular doctor can’t see you that same day.  Antiviral medications may be prescribed even if shingles is suspected but not yet confirmed.

3)  People who have shingles or PHN and are having moderate or severe pain should ask their doctors for a prescription for pain medications specifically shown effective for these conditions in clinical trials.  There are several effective treatments.

The shingles vaccine had been in short supply when it became available in 2006, but more and more hospitals and pharmacies report good supplies.  Iverson was a partial success story; he had been vaccinated but still got shingles.  Oaklander says he still probably benefited from the vaccination because most vaccinated patients who develop shingles have a less severe case and are less likely to be left with PHN or other serious complications.  Iverson reports his shingles pain is now “virtually gone”.

“I am happy to hear this news.  Receiving good care – immunization, prompt diagnosis and treatment with antiviral and pain medications – helped him through what can be a terrible ordeal.  However, not all patients have happy endings,” says Oaklander.

Take for example an 82-year-old man Oaklander counseled who had not been immunized and developed shingles.  Postherpetic neuralgia that lasted years dramatically slowed this once-active man who had exercised regularly and had a busy law career.  A cancer survivor, he thought he had seen the worst, but the chronic pain of PHN was very difficult to manage.

“My dad was a resilient man.  Prior to his illness, he put so much energy into his legal practice and his extended family, counseling clients, friends, children and grandchildren.  Once PHN set in, his mobility and his focus were compromised,” says his son.

Oaklander advises that people older than 50 should discuss the shingles vaccine with their physicians.  The vaccine is not recommended for pregnant women and people with weakend immune systems.

“The take-home message is to get vaccinated, and if you do discover you have shingles, seek immediate medical attention,” says Oaklander.