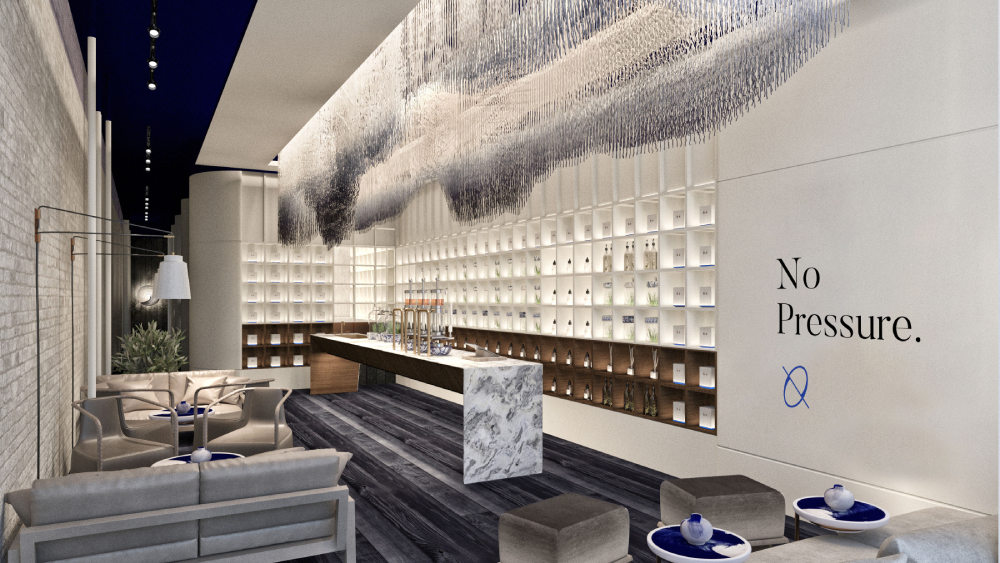 Acupuncture sits in an odd corner of the public consciousness. Most people kind of know what it is, but comparatively few have given the ancient form of Chinese medicine a go themselves. And it’s often for the understandable uncertainty that comes with being sporadically covered in needles like the pins dotting a military map. Ora is looking to change that with an environment that stays true to the practice but kicks the relaxation and luxury up a few notches.

Walking into Ora’s airy space on West 4th Street in Manhattan’s NoHo neighborhood is like stepping into a cross between a boutique hotel lobby and a minimalist apothecary. Designed by Rockwell Group, its white walls extend up to high ceilings from which hang a sculptural array of ombre tassels around soft lighting. This is suspended above a lengthy marble counter where guests can speedily check-in before retiring to a selection of supple taupe seating as they await treatment. According to founder Kimberly Ross, every detail was thoroughly considered.

“I really wanted to focus around the experience, design being a huge part of the experience,” Ross told Robb Report. “We wanted it to not be transactional and a huge part of our brand mission is to educate people on acupuncture and Eastern medicine, so we wanted to create a space that would help facilitate the conversation. The counter check-in is meant to be more like a kitchen counter than a true hospital-like check-in.”

For Ross, that mission is personal. A Type-1 diabetic with chronic digestive issues, she was referred to acupuncturist Gabriel Sher (now Ora’s director of acupuncture) when she was working in real estate development in New York City. After regular sessions, she noticed great improvement in her symptoms and saw the methodology as a complement to her Western treatments. When she moved to Boston to start at Harvard Business School in 2017, she also stopped seeing Sher—and her health issues quickly returned. Ross’s hunt for another skilled acupuncturist left her frustrated, but also made her realize that others might experience the same problem. From that point on, her graduate work focused on developing what would become Ora.

Ora offers an array of services designed to address everything from nagging aches and pains to digestion and even sexual health. Ross explained that one of acupuncture’s greatest benefits is its versatility. “Why I love acupuncture is that I might be going for my chronic health issues, but I think it also meets you where you are that day. If you’re having terrible neck pain or awful sinuses that day, you can also get relief for that. We wanted to make sure the treatments are tailored to you.”

Ora’s selection of teas and herbal ingredients for tonics.  Courtesy of Phoebe Cheong

Treatments take place in serene rooms with dim lighting and exceptionally comfortable beds where highly trained staff selected by Ross and Sher customize a plan for every patient. And for those shy of needles, you needn’t worry. Ross confirmed that the needles are the width of a human hair, quite literally a fraction of the size used in your typical doctor’s office. Clients also have the option of choosing treatments of different lengths to best suit busy schedules. After a session is complete, they can enjoy a selection of specially developed teas and tonics (which I can say from experience are far tastier than the word “medicinal” would have you believe).

“It was really through my own health reasons that I found acupuncture and then through my passion that would help other people,” Ross said. “So many people are really trying to feel better and struggling at that and acupuncture was something I was able to turn to to help me. I wanted to create a space that [other people] could also turn to.”