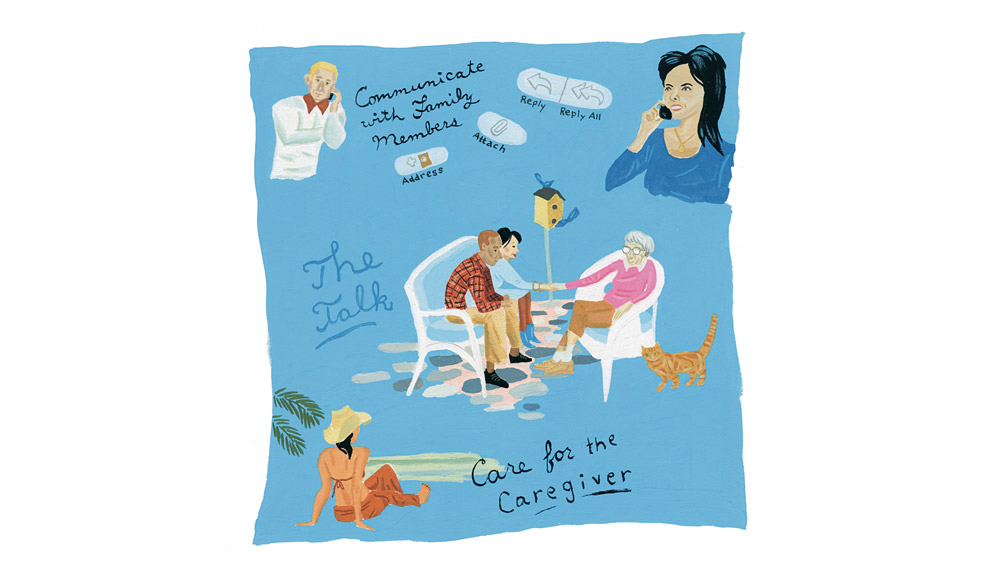 The always-tricky job of caring for aging parents—even as adult children are often still raising their own children—has grown more complex and stressful than ever, mental health experts say. Health-care advances mean that people are living longer and are less likely to suffer, say, the heart attack that ended a grandparent’s life in his 60s. “A baby boomer may have an 85-year-old father who is doing well,” says Barbara Moscowitz, MSW, LICSW, senior geriatric social worker at Massachusetts General Hospital. “But he may be living with and managing three to four chronic illnesses,” such as chronic heart disease, arthritis, mild Parkinson’s, and a developing cognitive impairment.

Each of these ailments—and the array of medicines to treat them—can cause symptoms and side effects that alter a parent’s ability to function in little ways. Your father, who was always meticulously groomed, suddenly has trouble shaving. Your gourmet chef mother now eats toast for most meals. Moscowitz suggests that these small shifts can be emotionally harder for adult children than an acute emergency, such as a heart attack. “It’s the slow, functional changes that creep up that really make caregiving a challenge,” Moscowitz says. On a practical level, these changes can be hard to notice and address when you live far away. But these shifts also signal “a change to something worse, and that’s frightening” for adult children, she adds.

This gets at a major difficulty in caregiving: coping with the deeply profound realization that parents are no longer a home base of care and support. “It is a very difficult transition and a complete role reversal,” says Robert Rowney, DO, a psychiatrist at the Cleveland Clinic’s Neurological Institute. Open, compassionate discussion with parents can help. “The best way to manage all of these fears is to face them by being as engaged as we can with our parents,” Moscowitz says. “If we can be aware of changes in their lives, we can slowly adapt emotionally, either by talking with them or simply reflecting on our own.”

A flexible mindset—making an effort to let go of some expectations—helps too. Caregiving involves “different people trying to work together, mixed in with a very difficult medical system, mixed in with logistical concerns,” Rowney says. “Things are going to fall apart at certain times, and go beautifully well at other times, and grown children need to be able to roll with the punches throughout.” Linda Ercoli, PhD, health sciences associate clinical professor, director of Geriatric Psychology at UCLA’s Semel Institute, who works frequently with families who have loved ones with dementia, says she has seen flexibility reduce caregiver stress. If, for example, a once-stylish parent stops matching his clothes, family members should evaluate this change. “Although it may not be aesthetically pleasing, what is the harm? Is it worth the fight?” Ercoli asks. “Allowing the parent some autonomy and choice is more important than shirt and pants matching.”

Another emotional flashpoint for caregivers: the moments when they must make decisions for a parent in crisis. (Where should a father live? What to do about a mother’s risky driving?) Parents may hide the truth about their daily difficulties, out of pride and fear that they will lose independence, and adult children may resist the possibility that a parent needs help. Experts say everyone usually copes better if they can discuss such issues early, before a crisis occurs. Of course sibling conflicts can complicate the picture. “A lot of childhood rivalries resurface at a time when you need to work fast and make decisions,” says Moscowitz, who often helps mediate sibling conflict. If families are stuck, she recommends calling in a third party whom everyone trusts, such as the family doctor or lawyer.

The good news is that the skills that make businessmen and women successful in their lives and careers can also help them care for an aging parent. “Being proactive and action-oriented helps with running a household, getting medical needs met, taking care of business,” Ercoli says. Creativity helps too, she adds. She remembers one man with dementia, a business owner, who insisted on being driven to work each day by family members, which was stressful for everyone involved. His family responded by setting up a home office, which kept him engaged and happy. “I have seen caregivers be extremely resourceful and resilient and really learn to cope, especially by reaching out to others,” Ercoli says. She is an enthusiastic advocate of caregiver support groups and suggests thinking of them as fact-finding missions to identify the very best emotional and logistical strategies. “Caregivers become experts over time,” Ercoli says, and it is smart to glean those hard-won insights from the connoisseurs. ✦

Mental health experts offer these tips for preserving peace of mind while parenting a parent.

> “It is important for families to begin discussing aging before a crisis, when there’s time to reflect, retreat, or argue,” Moscowitz says. Where do parents want to live? Are they open to hiring a driver? Who would they like to handle their finances when the time comes? Such conversations help parents feel respected, and children may get relief from knowing how to carry out their wishes.

> Share the caregiving burden among siblings. Give everyone a task, from driving a parent to the salon or board meetings to cleaning the

> Because parents are living longer, often with several mild illnesses at once, the caregiving process lasts longer than it did for previous generations. “You can hold your breath for two weeks to stand at someone’s bedside,” Moscowitz says.  “But you cannot hold your breath for 10 years.” That makes it more important than ever for caregivers to find regular sources of rejuvenation to protect their own health.