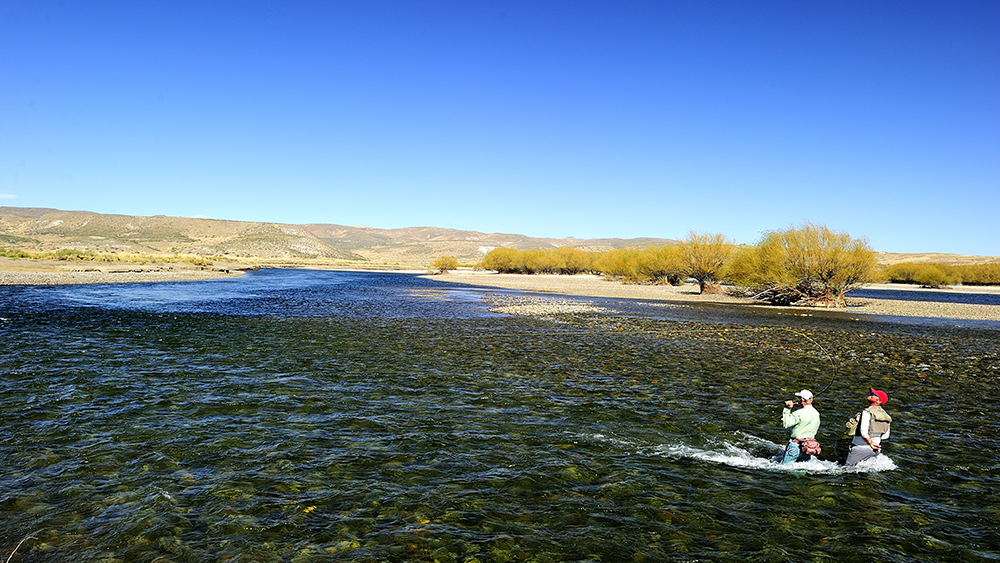 Every angler dreams of a place that takes ahold of the imagination and won’t let go. For me that’s always been Patagonia. Its beauty and vastness are part of its allure, but so is its distance. It’s a committed angler who travels to another hemisphere to search for trout. I wanted to prove how committed I was. That meant 28 hours, two flights and a long drive to the Collón Curá Lodge, on the famed river in the Patagonian desert.

A dream destination is about more than the fishing: It’s about hospitality, guides, food and all the traditions that make a place unique. Argentina specializes in an easygoing warmth, and when I arrived at the lodge, the manager was standing outside with a glass of Malbec and a still-hot empanada. Talk about a winning welcome.

Fishing in the Collón Curá is done from a drift boat in wide water through desert slopes. American anglers might compare it to a larger Madison River as it passes through the Ennis area of Montana. We cast small, dry flies in the morning (Parachute Adams, size 14) and larger grasshopper patterns as the day warmed. There was good surface action in the river’s riffles and back eddies. And we caught large, strong rainbow trout that refused to come in without making a few good runs. These are sleek, stubborn fish, more resistant than the agreeable rainbows I catch closer to home.

Lunch was not some deli sandwich out of a bag. This was a sit-down affair, set up by our guide, Nestor, with a table, checked cloth, cold braised beef and a bottle of red wine, even hot sauce—a proper meal.

The trip was arranged by Frontiers, an outfitter that’s been helping American anglers get to Patagonia for 40 years. It’s a great resource for Argentina’s lodges and to making sense of such an immense area.

We were led by Jorge Trucco, a pioneer who’s been bringing American anglers to Argentina since he founded Patagonia Outfitters in 1978. He’s a longtime advocate for the fisheries here, fighting the government to keep it from damming rivers and encouraging the catch-and-release practice among his guides—all of it to protect rivers in the area. As a fishing companion, he’s top-notch even when he’s catching trout right where I cast, with no success, a minute earlier. That’s local knowledge for you, and it goes a long way. It can mean knowing when to cast into the current close to the boat or when to cast into a back eddy. Sometimes you get the Patagonia wind, so keep your casting motion concise.

We shifted to a different lodge for the second half of our trip: Aluminé River Lodge, farther west. This is smaller water with lovely riffles.

On the last day, we went to a private property where we fished the incredibly technical Malalco stream—flat, clear water with fish that are easily spooked. In short, difficult. The fish are very large and very wary. Nestor and Jorge went ahead to stalk fish from the bank while I waded. When they saw a trout, I’d move as close as I could, still 40 feet away, and try to make one good cast to where the fish lay. I dropped a hopper ahead of a huge trout but spooked him. My next cast was to a nearby rainbow. A second after the fly hit the water, the brown trout returned and—there’s no other word for it—launched itself at the fly.

This was a truly large fish, the biggest brown I’ve ever had on my line. Nestor and Jorge exclaimed from up the bank. They were shocked. I was stunned. The fish made a run for some trees. I couldn’t keep him from making it there, as I was on a fine, 5x tippet. Once under the tree he managed to throw the hook. Any angler knows the finality of a lost fish, the possibilities of glory gone in an exclamation of failure.

I was in shock and wet, up to my waist in cold water. It was over in three seconds—three thrilling seconds that are now part of a dream that will continue. I’ll be seeing Patagonia again.