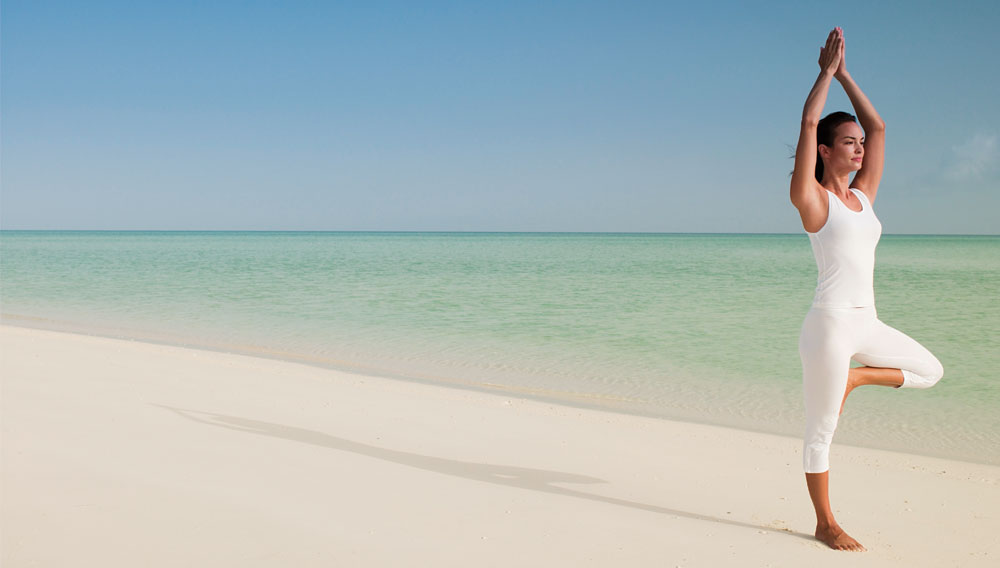 An island might be the ideal place to embark upon—or reimagine—one’s fitness journey. Just living near the ocean seems to make people healthier and happier, researchers say, and a rejuvenating sojourn to the archipelago of Turks and Caicos seems especially fitting for devotees of the increasingly popular discipline of Pilates. This system of body-conditioning exercises aims to strengthen core muscles while lengthening them and easing the tightness in a body that spends too much time sitting at a computer, allowing the equivalent of light and air to flow through the body. Positioned where the turquoise waters of the Caribbean meet the deep blue of the Atlantic, no other Caribbean resort is perhaps as perfect an architectural parallel to this concept as Amanyara on the Turks and Caicos island of Providenciales. Tropical breezes waft through the timber-shingled but elegant open-air beach, bar, and dining pavilions. Guest rooms and villas have sliding glass walls on three sides, inviting in both air and sunshine.

The more spiritual and slightly less structured practice of yoga has become de rigueur at many global resorts, especially among brands with deep Asian influences such as Aman, which opened its first property in Thailand in 1988, and Como Hotels and Resorts, which launched its Shambala spa brand in Bali. Yet deeper wellness programming that includes fitness studios, gyms, and high-profile personal trainers has begun to populate some of the more sophisticated retreats.

Located on Providenciales’ nearly uninhabited northwest point, Amanyara has added a dedicated Pilates studio filled with the practice’s apparatuses and tools: reformers, cadillacs, barrels, chairs, and magic circles. The decision to expand the resort’s program was in answer to guests’ requests, says spa director Ann-Marie McKenzie, but also stemmed from Aman’s progression toward a philosophy of whole-body flexibility and movement, and the kind of sinewy strength associated with the practice of both yoga and Pilates. This same progression is borne out in aqua therapy treatments designed to “unwind the spine,” as McKenzie says, while still protecting joints.

That is not to say that more heart-pumping activities do not abound. In addition to a gym equipped with weights and cardio machines, Amanyara has three Har-Tru clay tennis courts and provides guests with bicycles. Water sports such as stand-up paddleboarding, snorkeling, and kayaking are all included. It is almost difficult to avoid some form of exercise at Amanyara, unless staying in one of the property’s larger villas that provide not only private butler service but also a “buggy” (golf cart) to drive to the beach and dinners.

Many guests hail from New York, McKenzie reports, which is why Amanyara sought out a partnership with one of the more rigorous and popular studios in Manhattan and Southampton, Erika Bloom Pilates Plus. Instructor Kim Almquist, on property through the end of the high season this year, is less concerned with whether a client has mastered a technique such as Bird on a Wire or the Elephant than if he or she has reached the “quiver of truth:” that point where a muscle is working so hard that it shakes. Almquist easily finds the muscles that need strengthening the most and demonstrates intense, focused exercises. She points to a large area along her abdominals: “This is where your psoas is,” she says. “Think about that muscle. Find it, and think about giving it more space.” And if a guest struggles with a particular move, her suggestion is “Tighten your core,” even during an arm exercise. It is spot-on advice every time.

At the spa across the way from the Pilates studio, four treatment huts built for two overlook a reflecting pond. Well-trained therapists offer massage, scrubs, and aquatic therapy. Cameron Walker, on staff this spring, uses a combination of massage and breath work to follow up on the training with Almquist to loosen tight muscles and create more space in all those cramped corporeal pockets.

Dining at Amanyara is nearly as relaxing as a session in the spa. Cool breezes waft from the sea, and by evening strategic lighting makes the entire resort feel lit with candles instead of incandescence. Nearly every seat has a view of the ocean, infinity pool, or a tranquil inland pond. Healthy options abound, many of them Thai in origin. A steamed whole local snapper in a spicy fish sauce accompanied by Asian vegetables (flown in fresh from Miami daily) sates without stuffing. At lunch, a pomelo and crabmeat salad in a nam prik dressing refreshes. Yet Amanyara is so private, and the individual pavilions so quiet and plush, the most tempting option might be ordering any of these items for dining in-room. Service is extremely prompt.

Healthful cuisine proliferates at another Turks and Caicos fitness paradise: Parrot Cay (pronounced key) by Como, a small atoll off the eastern coast of Providenciales. The extensive spa dining menu has been designed by a nutritionist, and 14 fresh juice blends address every possible concern from aiding digestion and relieving stress to speeding muscle recovery from your run along the trails that snake through the island’s private coconut and plantain groves. Along with an emphasis on fresh vegetables and lean proteins in modest portion sizes, delicious sauces and dressings are made, inconspicuously, without dairy. The fusion of flavors and texture in the raw tuna salad with avocado, seaweed, soybeans, sprouts, scallions, julienned cucumbers, and tiny enoki mushrooms excites the palate. Raw and vegan options are listed on every menu.

The buoyant vibe at Parrot Cay contrasts with the serenity of Amanyara. The private island has nearly twice the number of guest rooms—75 to Amanyara’s 40—but privacy is just as pronounced: The resort occupies 50 acres of the 1,000-acre island and the rest is uninhabited. Visitors arrive by speedboat after a 35-minute trek through picturesque channels and lagoons lined with mangrove trees, then are greeted by general manager Grant Noble and the ever-accommodating Reka Yanti, who leads the guest services program.

Banyan trees line the pebbled path to the spa, which features nine treatment rooms and several studios for private exercise instruction, including dedicated spaces for both Pilates and yoga. Gorgeous views from the three-sided glass entryway and a cup of the spa’s signature ginger tea welcome clients and inspire tranquility. Both co-ed and single-gender relaxation courtyards offer whirlpools or steam rooms. An adjacent yoga studio opens to the island air and sun, and boasts its own private infinity pool. The stand-alone gym is well stocked and conveniently located near the poolside Lotus restaurant and mile-long sugar-sand beach, transforming a cool ocean dip into the ideal postworkout reward.