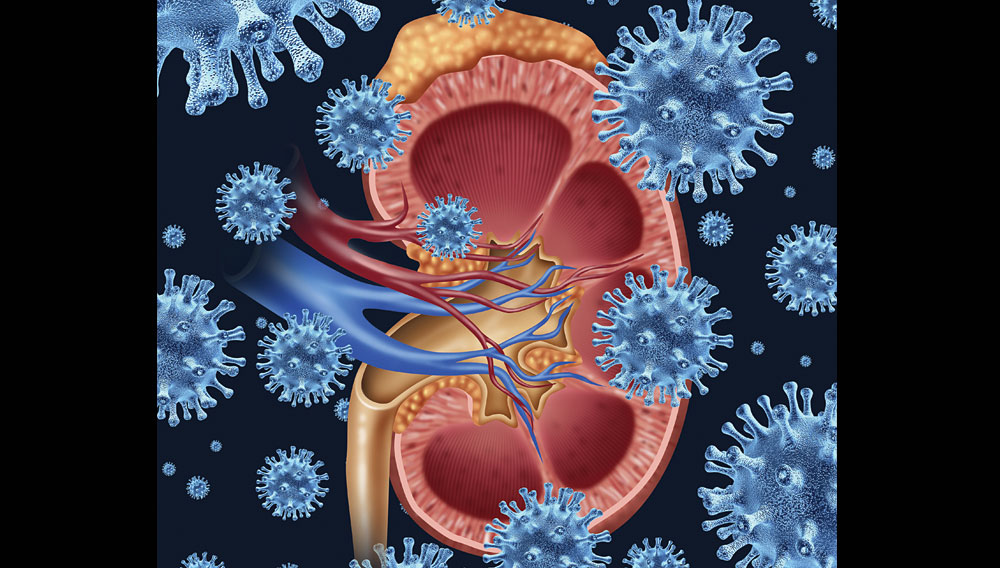 A drug approved for the treatment of rheumatoid arthritis may also turn out to be the first targeted therapy for one of the most common forms of kidney disease, a condition that almost inevitably leads to kidney failure.  A team led by Massachusetts General Hospital (MGH) researchers is reporting that treatment with abatacept (Orencia) appeared to halt the course of focal segmental glomerulosclerosis (FSGS) in five patients, preventing four from losing transplanted kidneys and achieving disease remission in the fifth.  The report is being issued online in the New England Journal of Medicine to coincide with a presentation at the American Society for Nephrology annual meeting.

“We identified abatacept as the first personalized, targeted treatment for kidney disease and specifically for FSGS, a devastating and largely untreatable disease,” says Peter Mundel, MD, of the Division of Nephrology in the MGH Department of Medicine, senior author of the NEJM paper.  “We also identified a biomarker that helps us discern which patients are most likely to benefit from therapy with abatacept.”

FSGS is characterized by the formation of scar tissue in the glomeruli, the kidney’s essential filtering units.  Some forms of FSGS are inherited and some have no known cause, but the vast majority of cases develop in individuals with hypertension, obesity or diabetes.  Although the underlying mechanism is unclear, FSGS disrupts the function of podocytes, cells within the glomeruli that are crucial to kidney function.  While treatment with steroids and some immunosuppressive drugs helps some patients, the drugs’ side effects make long-term use problematic.

Previous research by Mundel’s team found that the expression on podocytes of an immune molecule called B7-1 signaled the breakdown of the kidney’s filtering function, leading to protein leakage into the urine (proteinuria) and ultimate kidney failure.  Currently approved for the treatment of rheumatoid arthritis and being studied for other conditions, abatacept inhibits the activity of B7-1, a molecule that is not expressed in healthy podocytes.  After in vitro tests indicated that abatacept blocked the primary pathogenic effect of B7-1 expression in podocytes, the team tested treatment with the drug in five FSGS patients – four with recurrent disease affecting a transplanted kidney and one with treatment-resistant disease who was at high risk for kidney failure.

In all five patients, abatacept treatment induced remission of FSGS-caused proteinuria.  Two of those with recurrent disease have remained in remission with a single dose of abatacept for three and four years.  The other two required a second dose when proteinuria reappeared a few weeks later and have been in remission for 10 and 12 months respectively.  The patient with high-risk, treatment-resistant disease, who is being treated at MGH, went into remission for the first time in more than a year, continues in remission a year later and has resumed a normal lifestyle.  While she continues to receive monthly doses of abatacept, she no longer needs the high-dose steroids and immunosuppressive drugs she had been dependent on, some of which actually increase the risk for kidney failure.

An associate professor of Medicine at Harvard Medical School, Mundel explains that, while a large-scale clinical trial is needed, he and his colleagues are hopeful that abatacept will prove an effective treatment for kidney disease characterized by B7-1 expression on podocytes.  “We have a decade of good experience with the use of abatacept for rheumatoid arthritis, so we have every reason to believe that it will be an excellent long-term option for the treatment of all B7-1-positive diseases, including FSGS and perhaps diabetic kidney disease.”

Chih-Chuan Yu, MSc, of the MGH Nephrology Division is lead author of the NEJM report.  Additional co-authors include Anna Greka, MD, an MGH nephrologist and assistant professor of Medicine at Harvard Medical School, and George Burke, MD, a transplant surgeon at the University of Miami in Florida.  Support for the study includes grants from the National Institutes of Health, the Boston Area Diabetes Endocrinology Research Center and the American Society for Nephrology.