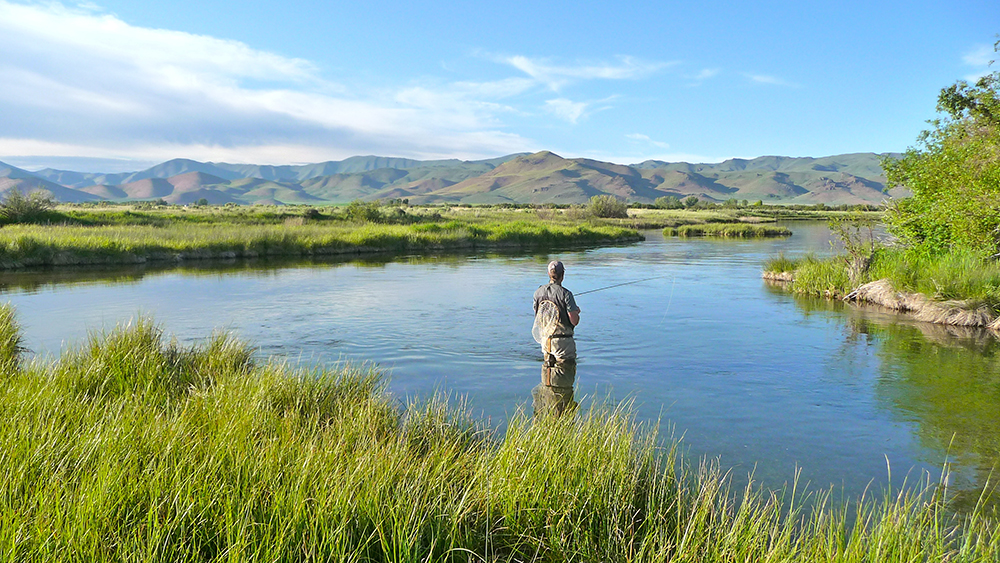 The thunder clouds came over the hill on a straight line toward us. It was almost sunset when we arrived at Idaho’s Silver Creek, one of the crown jewels of American fly-fishing. There’s no neutral way to fish this waterway. I remember each time I’ve been there, the conditions are etched in my mind, from the first fat rainbow I caught there 15 years ago to an excruciating lost brown trout that left me speechless last year. The arrival of a storm is often when the fish are most active. This would be another chapter in my history on this legendary water.

My friend Taite Pearson, an experienced guide here, and I had a decision to make. Should we take the path through the high grass and arrive at the creek at about the same time as the storm? Or wait under the porch of the visitor-center cabin for the weather to clear? It’s hard to be this close to legendary water and not fish it. I was sure Taite felt the same. “Is this inspired stupid? Or just plain stupid?” I asked him as we hauled on our raincoats. “We’ll find out soon enough,” he said with a gleam in his eye. We headed down the path.

Silver Creek is in Picabo, Ida., about 30 miles south of Ketchum, and snakes innocently through the surrounding meadows. It’s the source of much mythology, but in this case it’s a story that turns out to be true. Ernest Hemingway fished this water off and on for more than 20 years. But the story of Silver Creek involves a different Hemingway, the writer’s son Jack. As a boy he fished here with his father and grew to love the area. When the Silver Creek Preserve came up for sale, Jack, in an act of foresight and civic-mindedness, convinced the Nature Conservancy to buy it. That has kept its 870 acres undeveloped and open to all who want the challenge.

Taite and I got to the stream, which has a very slow current—one reason it’s so difficult to fish. The many trout can take their time to examine your fly as it floats gently by. If it’s not well-presented, they will wait for something more to their liking. Taite got to the water first. He tried to contain his excitement. “Every fish on the stream is feeding right now.” It was true: There were rises everywhere we looked, little splashes where trout were taking flies on the surface. Silver Creek was alive.

This is what anglers dream of. But at Silver Creek that dream will test you. The hatch was a baetis, which is a very small mayfly. And by small I mean tiny; these are about the size of an asterisk. The game here is downstream drifts on long leaders with a light tippet. The most delicate tackle you can use, it looks like you’re casting a spider web. That means the trout sees the fly first and isn’t spooked by the thicker floating fly line. Such casting is difficult in any case, but with the flies so small you can barely see them, it’s even harder.

I let the line out, casting down to a pair of rising fish. They seemed to feed on everything but my fly. I thought in their feeding frenzy one might just take it by accident. No dice. The water was cold. I could feel it through my waders and long underwear. Whose idea
was this again? I cast to another rising fish, and there was a splash and a hookup. Fish on! I quickly realized this was no trophy, but perhaps the smallest trout in the creek.

Taite laughed and tried to comfort me. “If you can catch a 6-inch trout here, you can catch a 26-inch trout here,” he said. “It’s the same technique.” This seemed like the faintest of victories. I watched Taite. He let his fly drift expertly down, mending the line so it followed the current exactly. He had a couple of rises but couldn’t hook up with the large trout that rose to his fly. It’s hard to set a small hook, especially when you have more than 40 feet of line out on the water.

The rain stayed away, and the sun set in a wide streak of orange over the Picabo Hills. It was unusually quiet. This is why Silver Creek draws anglers back year after year. It’s an extraordinary setting that tests your skill, one of the great legacies in the sport.

You can’t be passive about Silver Creek. To fish it well you have to be engaged during every cast and drift. The sensitivity and concentration required heighten the experience. You are fully there. When you catch a trout, you know you’ve earned it. And when you lose them, you know it’s part of the equation on one of the most challenging streams in the country. We paid attention, focused and fished, and felt good about that. We didn’t catch the big one that day, but we’ll be back.