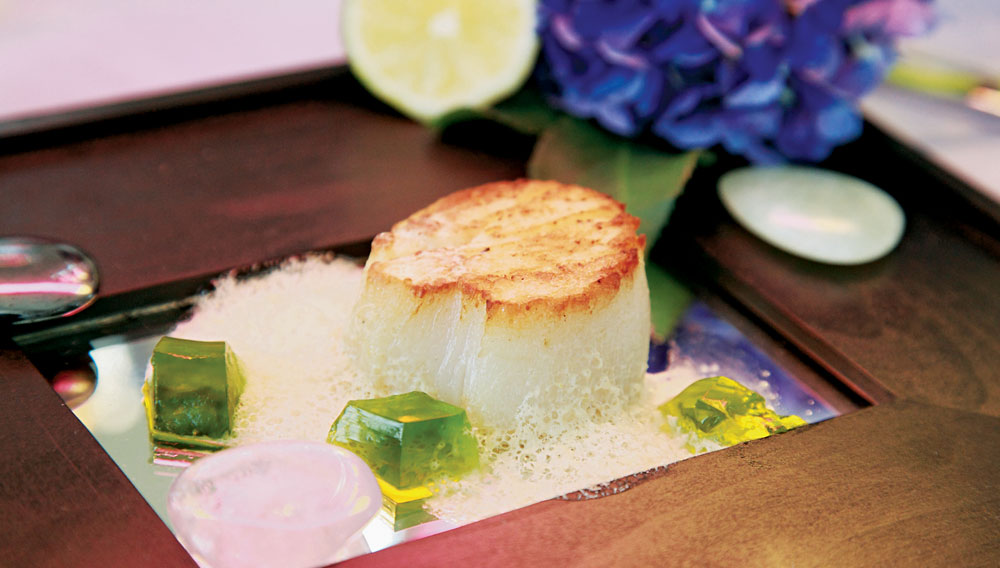 It is a blazingly clear winter night in Southern California, and on the private terrace at the Beverly Wilshire, Beverly Hills, a long dining table shimmers with white orchids and floating candles. A seven-course dinner is about to begin. “Close your eyes,” the host commands. In unison, servers step behind the dinner guests and flutter hands—anointed with lemon, lavender, rosemary, and sage—in front of their faces. “Inhale,” the host says. It is the first course.

The guests are midway through the Beverly Wilshire’s Taste of Beauty, an alternately divine and madcap new spa concept from the Spanish skin-care group Natura Bissé. The evening began in the hotel’s spa, with a seven-step, 90-minute facial and massage, and has now transitioned—with the inhalation—into an avant-garde dinner that parallels each step of the treatment.

The tingling cleanse of the spa’s glycolic acid peel inspired Gilles Arzur, executive chef at the Beverly Wilshire, to create an astringent rhubarb salad sprinkled with fizzy Pop Rocks and olive-oil powder. An exotically spiced aromatherapy masque led to a fragrant course of squab roasted in hay with cloves, cardamom, and long pepper. A treatment using marine serums and menthol mist became a single fat scallop awash in eucalyptus foam and paired with a mint–vodka cocktail in a silver atomizer (which, despite the formal setting, guests are soon spritzing at each other in mock toasts). “Yes, it’s very funny,” says Joaquin Serra, Natura Bissé’s senior executive vice president—and the first to spritz a tablemate. “But it’s also an experience you will never forget.”

Unforgettable is not a term often applied to spa cuisine, which has never been taken seriously as a form of true gastronomy. But as spas continue to broaden their offerings, they are venturing further into the foodie world. Along with Natura Bissé, La Prairie, the high-end Swiss cosmetics company, has created a package with a decided grip on fine dining.

La Prairie and the Ritz-Carlton New York, Central Park, debuted in January their All-Caviar Weekend at the Manhattan hotel. The package ($1,985 for a deluxe room overlooking the park, $3,185 for a suite) begins with a welcoming caviar martini, then continues with a 60-minute massage for two using La Prairie’s Skin Caviar (a product with the texture of whipped butter and absolutely no fishy evidence of its active ingredient). Then it is on to a private caviar tasting, either en suite or at Petrossian, the caviar purveyor and jewel-box restaurant around the corner from the hotel. Three of Petrossian’s top varieties are sampled by the spoonful and explained over Champagne by Alexander Petrossian, grandson of the founder, or Michel Emery, director of sales. Petrossian also hosts the guests for a three-course caviar brunch on the package’s final day.

The Beverly Wilshire’s Taste of Beauty package ($1,500 per person for groups of six to eight guests) transpires over the course of an afternoon and evening. In the coming months, Natura Bissé plans to introduce the program at hotel spas worldwide; Puerto Vallarta, Mexico, is likely to be next, followed by locations in the United Kingdom, Dubai, Japan, and Spain. At each venue, the dinner menu—and the memorable moments—will be left to the imagination of the chef.