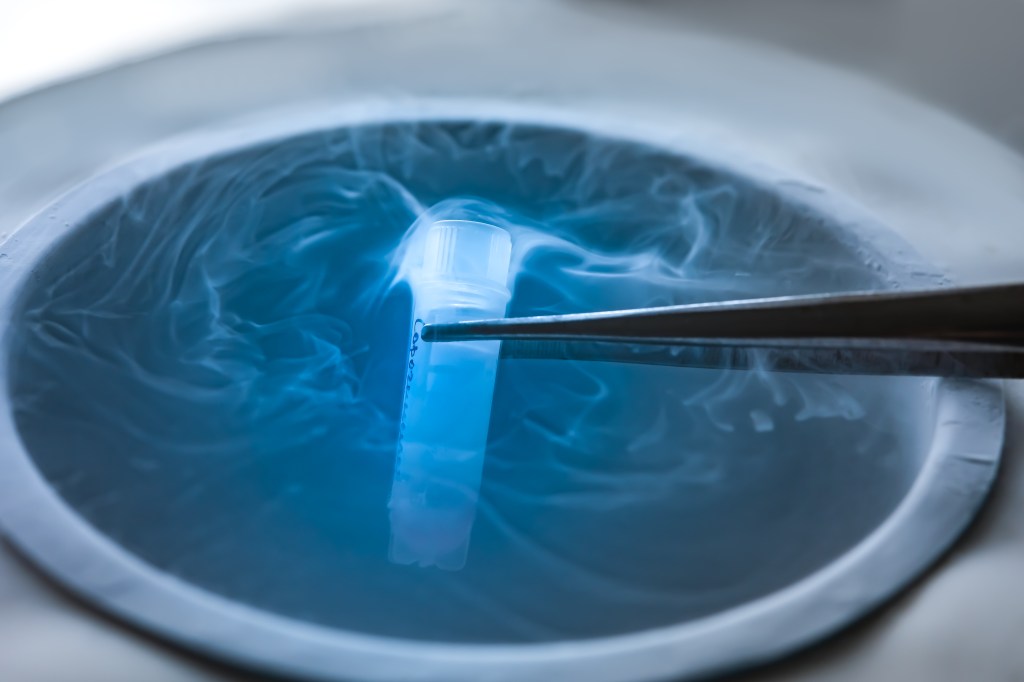 Lately I’ve been thinking a lot about my boys. By that I mean both literally—as in, hypothetically about the children I have yet to have—and more figuratively, as the parlance for the sperm that (hopefully) might one day create the former. Upon entering my 40s I started hearing the faintest ticking. While the biological clock bells usually don’t ring as loudly for men as women, it’s still a major consideration. The essence of life, the continuation of your family’s genetic strain: Existentialism at its best.

As I’m not close to having kids in my current relationship, I had to start thinking about options. I knew about sperm storage, but the process of these clinics—the anxious sitting in the waiting room, the awkward conversations with doctors and receptionists, the simultaneously sterile and yet mentally contaminated “donation” room—all left me more hesitant than ever. That’s when I learned about Legacy, a new health care start-up focusing on men’s fertility. Or more specifically, on testing and then preserving men’s sperm—all done from home, without ever having to enter a clinic or interact with another soul. Now that sounded much more appealing.

The start-up was born out of founder Khaled Kteily’s own awkward experience at a traditional clinic. “They hand you what they call the specimen cup and lead you to a small room—you do not want to touch anything in that room, of course. There’s an array of pornographic materials and, again, you don’t want to touch any of those materials. The door’s closed, but there’s light coming in from underneath the door,” the 32-year-old entrepreneur recalls. “You can even hear people as they’re walking past the door! So all this to say I think for 99 percent of men that’s not really the ideal setup to produce a sample.”

Though the experience was awkward, it gave Kteily the idea for his new business, a direct-to-consumer sperm-testing and freezing service. Studying health care policy at the Harvard Kennedy School of Government, he was acutely aware of the rapid growth of medical tech start-ups such as Roman and Hims that offer erectile dysfunction medication directly to consumers, so you never have to leave the comfort of your home. The concept seemed tailor-made for the embarrassing world of testing and freezing sperm.

“Not to get too Darwinistic about it, but at the end of the day men care about two things in life: They care about their ability to have sex, and they care about their ability to have kids. And it was these companies that were helping them with the former, but there wasn’t yet a company helping with the latter,” Kteily tells Robb Report. The absence of any similar service in the market further fueled his concept for a direct-to-consumer male fertility solution. Pointing out that these health care companies are now worth between $4 billion and $5 billion each, the entrepreneur believes this valuation only underscores the potential that Legacy might have.

“[Roman and Hims] started by making it easy for men to get access to erectile-dysfunction medication without having to go to a doctor,” he states. “Why can’t that work similarly for sperm testing?”

In 2018 Kteily founded Legacy in Cambridge, Massachusetts, out of Harvard’s Innovation Lab, raising an initial round of funding from Bain Capital Ventures. Another round followed via Y Combinator, and over the last three years, the start-up has raised $50 million while building a team of almost 30 specialists, including health care workers, fertility scientists, doctors, nurses and urologists—experts who bring a clear health care perspective to an often taboo subject. So far, Kteily says Legacy has serviced about 5,000 men, growing roughly 20 percent a month for the last year and a half.

There is a level of urgency as well. Kteily points to a 2017 study, which revealed that male fertility has decreased by 50 percent in the last 40 years, and a 2020 American Urological Association Virtual Experience finding, which showed that testosterone levels in adolescent and young adult men have declined significantly since 1999. Other studies show how endocrine disruptors and other chemicals are making us less fertile and may even be shrinking penis size (according to epidemiologist Shanna Swan’s book, Count Down).

“This means that you and I are about half as fertile as our dads or granddads would have been at the same age, which is kind of a scary thing,” Kteily claims. “So clearly there’s something that is just affecting all of our abilities to have kids.” Which is why Legacy advises men to get tested as young as possible and to store the youngest sperm they can.

“Men also have a biological clock, it’s just not as steep as it is for women. For women, there’s a very steep decline after 35; for men you start to hit the decline between 35 and 40,” Kteily argues. “So here’s what you need to know: The older you are, every year, your sperm quality declines by anywhere between 1 to 1.5 percent year-on-year. The older you are as a father, the more likely you are to have trouble conceiving. So longer time to conception, and when you do try to have kids, higher risk of miscarriage. Then the third part is children born to older fathers are more likely to have genetic conditions like autism. The mother is more likely to develop gestational diabetes. I mean, there’s all kinds of risks associated with older dads. And we as a society just don’t talk about it because you have Mick Jagger, who was having kids in his 70s. So we all think that we’re invincible, but actually by the time you hit 40 there’s a real meaningful decline.”

Of course, Kteily, importantly, is not a doctor with expertise in human reproduction. Which is why I reached out to Dr. Wayland Hsiao, a male reproductive urologist based in Oakland, California. When I asked Hsiao about the Legacy founder’s claims, he pushed back a bit.

“I hate to sound like too much of a Debbie Downer, but this whole idea of, ‘Everyone’s getting old! We gotta freeze our sperm now!’ is probably a little bit oversold and a little bit alarmist,” he told Robb Report. The doctor explained that the studies Kteily cites are considered controversial in the medical community, as sperm-counting techniques weren’t standardized until the 1980s. He also considers them flawed because they did not study men at different ages of their lives and instead compared men of different generations.

“With women from 35 to 40 there is normally a sudden drop, and it is significant. Sperm-freezing advocates use that same reasoning and apply it to men with the same urgency, but it’s not the same,” he argues. The specialist stresses that male fertility does not significantly decrease before your 30s: “It’s real, but it’s a small decrease,” he said. “Stretch it out over 20 years, yes, there’s a drop. Over 5 to 6 years, probably not a big deal.”

Dr. Hsiao does concede, however, that studies have shown strong associations between older fathers and autism, depression and other mental health issues. He also urges freezing for anybody with a high-risk job—firefighters, police, soldiers stationed abroad, etc.—cancer patients (prior to chemo or radiation therapy) and transgender patients before transitioning, a more recent trend.

But the doctor also underscored that, if money is not an issue, there is no reason not to do it: “If anyone ever wants to freeze sperm, you’ll never hear me say no, because when you’re 20 your sperm is going to be healthier than when you’re 50,” he says. “But the flipside is, can a 60-year-old have a healthy child?” he asked rhetorically. “Yes, of course.”

On a personal level, I decided to try Legacy, and once I sent in my sample, this slow but inexorable descent into a Children of Men–type global neutering had me quite anxious. Thanks to a lifetime of irresponsible living and generally questionable decisions, I feared the results would come back dismal, showing unhealthy or low count sperm. Instead, I discovered I was perfectly average on all of Legacy’s major categories (volume, count, concentration, motility and morphology)—the one time where being average is more than OK. I marveled at the seamlessness of the process, all done without ever leaving my home, and for a relatively low cost of $195.

Another style of the Legacy packaging  Legacy

Once I knew my sperm was healthy, the only decision left was whether to freeze it or not. The start-up offers two options, one for five years of sperm cyrostorage ($995), and a “Forever” package that offers storage for a lifetime ($3,995). Barring serious injury for a man in his 20s, the procedure is most likely unnecessary, but for those around the age of 35 and beyond, freezing certainly offers any man with aspirations for children added insurance. And doing it from the comfort of your home makes it far less daunting.

“It you can’t pay rent, don’t do it. If money’s not an issue, then there are fewer obstacles to doing it,” Dr. Hsiao said, granting that in the end, having frozen sperm does give a man one more option for fertility down the road. “What’s the downside, just money? Maybe you play lacrosse tomorrow and someone hits you in the nuts—oh no! At least you have something in the freezer.”