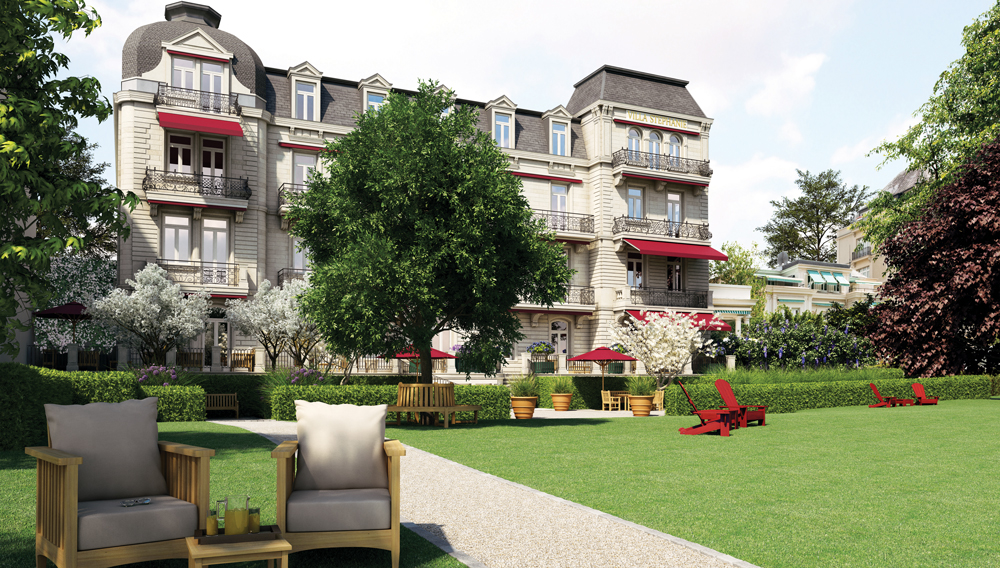 Never underestimate the power of a good hot bath. Before plumbing advanced to the point where in-home tubs became de rigueur, natural hot springs around the world provided the pleasures of a peaceful soak to untold numbers. Bathers noticed other benefits as well, from easing achy muscles and joints and relieving the pain of rheumatism to less-likely claims of curing heart and kidney trouble and a litany of other ailments. As legends grew around the purported healing powers of the mineral-rich waters of certain springs, towns arose to serve the pilgrims who came to drink and bathe. Inevitably, some spa towns evolved from medicinal meccas to full-fledged resorts where “the worried well” indulged in both legitimate and fad treatments, the robustly healthy played sports and other vigorous activities, and those in rude health scurried off to gamble. Just as you may have a hot bath without a natural hot spring, you can visit hundreds of spas that do not depend on local springs, even if they exist. But the culture of the spa—the focus on health, wellness, rejuvenation, and pampering—was first nourished by those historic waters.

Baden-Baden, Germany, has been a spa town for nearly 2,000 years, with baths visited by the second-century Roman Emperor Caracalla. Brenners Park-Hotel & Spa has reigned as the top Baden-Baden resort for the better part of a century, even though it did not actually install a spa until 1983. In January, Brenners Park unveiled a new, deluxe destination spa in the Villa Stéphanie, a stately 1890 five-story manse on the grounds adjacent to the main building. The lower floors contain a 5,380-square-foot sauna, a plunge pool, a hammam, a ladies’ spa, and a private fitness center. The three upper floors host 15 private treatment rooms: four deluxe double rooms and a large corner suite on each floor. “It doesn’t really look like a hotel. It’s like a private residence,” says spa manager Hans-Peter Veit.

Villa Stéphanie remedies shortcomings of the former spa, which was located in the Brenners Park basement. “You’re near one of the best parks in Europe. You want to see the trees and you want to breathe the fresh air!” says Veit, noting, “All the new treatment rooms face the park.” brenners.com

A few miles from the Omni Home–stead Resort golf course where Slammin’ Sammy Snead perfected his game sits the oldest spa structure in the United States. Built in 1761, the octagonal Gentlemen’s Pool House building, in Warm Springs, Va., has welcomed American luminaries of centuries past: J.P. Morgan (a one-time investor in what is now the Omni Homestead), John D. Rockefeller Jr., Cornelius Vanderbilt III, and the man for whom it was renamed in 1996, Thomas Jefferson. The third president and principal author of the Declaration of Independence spent 22 days at what was then called the Warm Springs Resort in August 1818, taking the waters twice a day to soothe his rheumatism. (The Omni Homestead, located in Hot Springs, Va., came on the scene later and now administers the Jefferson Pools.) Jefferson noted in his memorandum book that the activities of Aug. 13, 1818—breakfast, dinner, and a soak in the warm mineral springs—set him back $2.12.

Today, a visit to the Jefferson Pools costs $17, but that buys an hour of soaking in the 43,000-gallon pool of constantly flowing mineral water. It is a bargain for the most relaxing history lesson one could have. In addition to Jefferson, at least four other U.S. presidents are known to have visited the Jefferson Pools: James Madison, Millard Fillmore, Martin Van Buren, and hot-springs fan Franklin Delano Roosevelt. And it is very likely that George Washington stopped for a dip in 1755 and 1756 when he was inspecting forts as commander of the Virginia militia. “You do feel rejuvenated when you get out,” says David Jurcak, managing director of the Omni Homestead. “It’s a pretty incredible experience when you think of who has been in the pool: not just Jefferson, but who was here 75 years ago, 80 years ago. They came for the same reason, the medicinal value.”

Beyond the historic pools, guests of the Omni Homestead can immerse themselves in the resort’s modern offerings, from pampering treatments and fitness classes to the aqua thermal suite, which includes experiential showers (try the Caribbean storm setting), radiant-heated loungers, a cold cabin with flaked ice, and an aromatic steam room. omnihotels.com

Before the chic boutiques lined its streets, before it hosted two Olympic Winter Games, and before Johannes Badrutt is said to have won a bet with four British tourists in 1864 that they would love the place even if they came in the dead of winter, St. Moritz, Switzerland, was famous for its iron-rich spring waters. Known for some 3,000 years and visited by the Renaissance-era physician Paracelsus, the waters originally lured visitors to the Alpine town perched 6,000 feet above sea level.

Johannes Badrutt’s gift for hospitality survives him in the form of his grand St. Moritz hotel, Badrutt’s Palace. While its spa offerings do not involve the local spring waters, it makes the most of the refreshing beauty of the Engadin Valley. Badrutt’s Palace guests enjoy an unobstructed view of the mountains and the lake while soaking in the heated outdoor pool, and its granite diving rock allows one to imagine leaping from a peak into the water. Palace Wellness, the $25 million spa facility ­completed in 2010, fulfills everything one might wish for in a spa. Its 10 treatment rooms include two Spa Suites, named Iris and Veronica after regional flowers. Both recently renovated and measuring about 600 square feet, they allow one to essentially rent his or her own day spa for three hours at a time (treatments and room service incur separate fees). Iris, which completed its renovation in January 2014, includes a double Jacuzzi, a sauna with a view, a beauty station, two treatment beds, and a private garden filled with Alpine blooms. badruttspalace.com

Located 180 miles from Manhattan and about 30 miles from Albany, Saratoga Springs, N.Y., became an irresistible draw in the 19th and early 20th centuries for members of Mrs. Astor’s 400 who sought respite from the city, as well as for gamblers clustering at the race track—America’s oldest, which opened in 1863 and still runs races in summer. The resort town was so popular in its Gilded Age heyday that the New York Central Railroad touted a service it dubbed the “Saratoga Limited.”

The elite bathhouses have since dwindled to one: the Roosevelt Baths & Spa, accessible through the state-owned Gideon Putnam Resort. The endeavor is the legacy of Franklin Delano Roosevelt, who became a keen taker-of-waters after his polio diagnosis. He launched the baths project when he was governor of New York and cut the ribbon in 1935 after becoming president of the United States. Its 42 private bath suites, each with its own vintage cast-iron tub, admit up to 200 patrons a day to luxuriate in the effervescent local mineral waters, rich in bicarbonate, chloride, sodium, calcium, potassium, and magnesium. The spring water is mixed with just enough fresh water to raise the natural 55-degree temperature to soaking heat. The suites are equipped with massage tables that allow staff to deliver modern spa treatments, but the baths—priced at $35 for 40 minutes—are as relaxing as ever.

“There’s just something in the mineral makeup of the water that relaxes your mind,” says spa director Kimberly Rossi. “The waters dance at the top of the tub, the bubbles hug your skin, it’s magical. Then all of a sudden 40 minutes have passed, and you don’t know where the time went.”  gideonputnam.com/spa.aspx

Istanbul may lack the natural springs found in the south of Turkey, but it still has a thriving hammam culture. The centuries-old Turkish hammam bath, in which a skilled therapist scrubs one from head to toe with a kese, or exfoliating glove, remains popular with locals and travelers alike. Among the most famous and beautifully tiled historic examples of hammams are the 16th-century baths commissioned by Roxelana, a favorite consort and later wife of Sultan Suleiman the Magnificent.

Most of the city’s luxury spas offer hammam-themed ministrations, but none does it quite like the Ritz-Carlton Istanbul. It features three sumptuous hammam rooms, one of which is a couples’ suite. Unveiled in August 2014, it is the only hammam space in Istanbul designed for two. A visit to the spa soothes all the senses, not least the eyes, which are delighted by the antique wooden Turkish doors, mosaics of swirling tulips, and stained-glass touches in the private relaxation areas.

The Ritz-Carlton Istanbul is also the only luxury hotel in the city with a proper open-air spa. Available in summer, it allows guests to take treatments while enjoying a view of the Bosphorus River. It and the hammam services attract a loyal local clientele and guests seeking a once-in-a-lifetime experience. The Ritz-Carlton Istanbul has satisfied both audiences since its 2001 debut and is ensuring it will keep doing so with an ongoing renovation of the spa throughout 2015. ritzcarlton.com