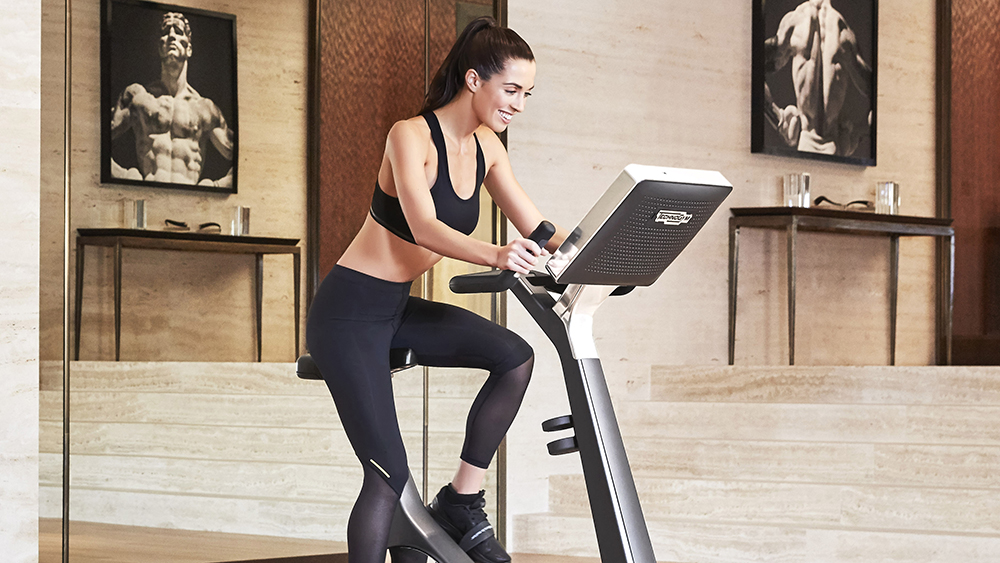 Some years ago, cycling got sexy. Dark mirrored rooms in gyms and studios are—well, were, and hopefully soon might be again—full of sweaty, toned believers in Lycra and cleats, high on adrenaline and community. You can have the same experience in your own front room now, of course, with sleek spin bikes and shouty instructors in your headphones. Pedal power!

Except what if your body won’t let you? The CDC states that low-back pain causes more global disability than any other condition. And if you’re one of the 25 percent of Americans to have reported backache to your MD in the last three months, you may look at spin bikes and recoil in fear.

What’s this got to do with the rather stylish but definitely not spin-y exercise bike you see in these pictures? I’m one of those bad-back people. Decades of soccer, rugby and extreme(ly stupid) sports such as bungee jumping and zip wires have resulted in five operations and quite a lot of scalpel scars. As a result, I’ve had back pain for 20 years, and chronic sciatica in my left leg for the last six. Which means pain—and prescription meds—every day. Countless injections, acupuncture sessions, cryogenic chambers, infrared saunas and CBD concoctions have had little effect.

The thing that helps a bad back most, funnily enough, is movement. But movement can also hurt like hell. Running is out. Likewise yoga. Swimming is just too much of a bore. Cycling, relatively low impact, is an option, but spinning, mountain biking or anything remotely fun is not. So the whole “cycling got sexy’” thing doesn’t really apply to me. The only thing my back will allow is sitting more or less bolt upright on the bike like it’s 1870 and I’m on a penny-farthing. And for anyone who has yet to endure a bolt-upright exercise bike, they are unquestionably the most boring pieces of exercise equipment ever invented.

Or so I thought. As gyms began to close down and my only real movement was walking from bedroom to living room, I needed a bike that wouldn’t look too tragic in a corner of my apartment, which is when someone suggested Technogym’s new “Personal” line of equipment. The last time I bought an exercise bike, about 10 years ago, it came with a four-inch black and white screen on which you could see a few dots to symbolize the hill you were about to ride up. So first impressions were interesting: Looking at the sleek, angular machine that Technogym agreed to loan me for this review, it was clearly in the same family as my old bike but an entirely newly evolved species.

Technogym, of course, is not new to high-quality exercise equipment. The Italian manufacturer has been an official supplier of the last seven Olympic Games, and its machines can be found at posh hotels gyms and expensive health clubs in over 100 countries around the world, according to its website. Interestingly, the company doesn’t describe the newly introduced “Personal” line as a gym kit. It prefers “interior design equipment” to highlight a partnership with furniture designer and architect Antonio Citterio. The bike, along with a treadmill, cross trainer, weights stack and recumbent bike—plus a wall-mounted training system that has become very popular on superyachts, called Kinesis—are beautifully put together.

The rather prescient thinking behind all the pieces is that they should be elegant and attractive enough in their own right not to be hidden away, designed for those who now put health and wellness at the heart of their home. And as home is where we’ve all been spending most of our time, I was keen to see if aesthetics married to the latest tech would be enough to override the boredom factor I was already beginning to dread.

The TL;DR version of this story is yes, they would. And that’s due to a couple of things. This bike is comfy. Not sofa-comfy, obviously, but about as comfy as a piece of interior-design equipment is likely to be. The seat is a good size, and the ergonomics of the bike are excellent. And then there’s the 20-inch color screen, which allows you so many options for exercising I found it impossible, in six months of using the bike at least three times a week, to be bored. Exhausted, yes, but not bored.

Once you’ve logged in and set up your account on the phone app (which stores your various workouts so you can check your progress), the first thing you see when you power up the bike are six boxes, labeled Sessions, Custom, Routines, Outdoors, Apps and TV.

Sessions will get you one-on-one with a number of different trainers for pre-recorded classes, focusing on strength, stamina, speed, etc. There are six different sessions on each topic, so while you don’t get the live buzz of a real class, you do feel like you’re cycling with an actual human and, with beginner, intermediate and advanced levels of each session, there’s plenty of room to improve over time.

With Custom you can tailor your workout based upon distance, heart rate, intervals or other metrics. And with weight loss, cardio or general fitness versions, again there are more than enough ways to keep yourself motivated. Routines is a different variation of the above, where you follow along with a pre-recorded trainer who’ll get you out of the saddle doing different protocols, but the intensity here is set by the bike. You can also brace yourself for what’s coming up as a preview panel shows the next stretch, which is good if you don’t like surprises.

I tried all of these options, but of these three I found myself returning to Sessions most often. They can be short and sharp—some as little at 10-20 minutes—or much longer and harder, so they were ideal both when time wasn’t on my side or if I fancied a challenge.

Of the others, Outdoors, as its name suggests, places you on a bike in “real” locations as you pedal trails in Colorado, beaches in Portugal, lavender fields in Provence or explore cities such as Madrid or Rome. That was more of a novelty, but I’ll admit it was nice to cycle along a beach in the sun when it’s pitch black and freezing cold outside my window. Apps gives you Netflix, socials and all the others, while TV probably doesn’t need explaining.

Despite all the numerous options to vary my session, more often than not I would simply turn on the heart rate monitor that came with the bike and start pedaling, trying to maintain my beats per minute around 120-135. This was a good cadence to keep my heart pumping, while giving me control: It felt tough enough to call it a workout while being easy enough on the back (and knees) that I could do 45-60 minutes before the rest of my family woke up. It also allowed me to watch Masterclass on my phone or catch up on Instagram Stories while my legs burned. And as I got fitter and my back got used to cycling again, I liked the challenge of progressing through the Sessions workouts, pushing myself to see if I could tolerate various new programs.

In terms of build, this thing, while not particularly large for an exercise bike, is plenty strong. You can go all out while standing on the peddles, as if you’re racing for the finish line (if that’s your thing), with zero chance of the bike moving, much less tipping sideways.

There were a couple of things that didn’t work perfectly. There was an update that I must have tried 20 times to install as instructed on screen, which took about 10 minutes and failed every time. Which was infuriating. Just when Technogym was about to send someone over to fix it, it began to work—and greatly improved the functionality of the bike, as new, better classes had loaded, which was a welcome surprise. Also, you need a good Wi-Fi signal. Mine is fine, but on a couple of occasions listening to music from my phone while trying to cycle through Barcelona resulted in a very pixelated screen, particularly if Netflix was being streamed in another room.

My main complaint is that you can’t combine sessions other than starting a new one from scratch after you’ve completed the first. This means you can’t roll your data from the first into the second to give you a total set of stats at the end (average bpm, calories burned, distance traveled, etc). It’s not a big deal, clearly, but with the amount of tech contained within this bike, I was surprised nobody had considered that. Maybe something for the next update?

It’s not even close: This is the best exercise bike I’ve ever used, not to mention the best looking. It’s probably the best piece of exercise equipment I’ve tried, period, in close to 30 years of going to the gym on a regular basis (between operations). And it worked: Combining cycling sessions with back-friendly resistance training on Zoom calls with my PT has resulted in me feeling better than I have for a long time. My back still hurts, but not as much, and it hasn’t stopped me from training, which was all I was hoping to achieve right now. And I’d go as far as to say this bike, both aesthetically and technically, could almost make penny-farthing cycling sexy, too.