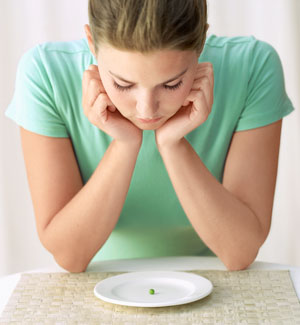 Eating disorders such as anorexia nervosa, bulimia nervosa and binge eating are serious medical illnesses that can significantly disrupt lives, harm physical health and, in some cases, prove fatal. But in addition to the several million Americans who have a diagnosable eating disorder, many more show symptoms that, while not meeting the criteria for a diagnosis, should be cause for concern. Experts at the UCLA Eating Disorders Program say these individuals, too, should see a trained professional for consultation and, when warranted, treatment.

Rough estimates suggest that about 1 percent of U.S. females have symptoms of anorexia nervosa, such as preoccupation with dieting and a misperception of their actual size, “but they do not experience the extreme weight loss characteristic of the disease,” says Michael Strober, Ph.D., the Resnick Professor of Eating Disorders and director of the UCLA Eating Disorders Program.

Similarly, Dr. Strober adds, the number of people who don’t reach the frequency threshold for a diagnosis of bulimia nervosa but still engage in binge eating and purging behavior is believed to be roughly equivalent to the number meeting the diagnostic criteria.

The majority of people with symptoms that fall short of an eating-disorder diagnosis do not ultimately progress to a more severe illness, Dr. Strober notes. But that doesn’t mean these individuals aren’t at increased risk. “With any psychiatric disorder, minor symptoms increase the risk of major symptoms over time,” Dr. Strober says. “So for eating disorders, it’s as hazardous to ignore minor symptoms as it is to presume that they foreshadow a more ominous future.”

Moreover, says Cynthia Pikus, Ph.D., associate director of the UCLA Eating Disorders Program, eating-disorder symptoms below the threshold for a diagnosis can still have a negative impact on relationships and everyday function. For that reason as well as the increased risk that such symptoms might worsen, Dr. Pikus says, the presence of even minor symptoms should not be ignored. “It’s important to identify the signs early on and get treatment before the symptoms become entrenched or intensify,” she says.

Eating disorders are not limited to adults. The likelihood of a child eventually showing symptoms of an eating disorder can be reduced by promoting a healthy self-esteem and strong sense of self. “Parents and other significant adults in children’s lives should demonstrate that there are many qualities that contribute to the child’s value beyond appearance and weight,” Dr. Pikus explains. “That can be conveyed both verbally and by modeling what’s important.”